I’m doing some world-building, thinking about the role of magic in general and Clerical magic in particular. This bit from the AD&D Player’s Handbook has captured my attention:

Clerical spells, including the Druidic, are bestowed by the gods, so that the cleric need but pray for a few hours and the desired verbal and somatic spell components will be placed properly in his or her mind. First, second, third, and even fourth level spells are granted to the cleric through meditation and devout prayer. This spell giving is accomplished by the  lesser servants of the cleric’s deity.

This is altered a little bit in the AD&D DMG:

It is then assumed that prior to becoming a first level cleric, the PC received a course of instruction, served a novitiate, and has thoroughly read and committed to memory the teachings of and prayers to his or her chosen deity, so that the character is dedicated to this deity and is able to perform as a cleric thereof. It is this background which enables the cleric character to use first level spells.

Furthermore, continued service and activity on behalf of the PC’s deity empower him or her to use second level spells as well, but thereafter another agency must be called upon.

Cleric spells of third, fourth and fifth level are obtained through the aid of supernatural servants of the cleric’s deity. 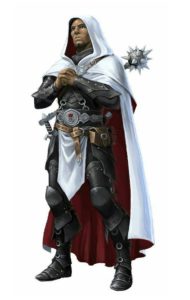 This suggests the existence of an empowered group of Initiates, those servants of the god that have completed the training, learned the catechism and begun actual service to the congregation. These ordained Acolytes (1st level), Adepts (2nd level), Priests (3rd level), and Curates (4th level) can perform the various rites, rituals and services of the particular church, and cast minor spells on behalf of the deity. It follows that these first and second level spells would be recorded in a written format, whether in a codex, a collection of scrolls, stone tablets or what have you.

No direct contact with the deity or its minions is necessary for the Initiates to carry out their duties.

I would submit that there would also be a written record of other “non-magical” (but perhaps no less divine) prayers and rituals available to Initiates, as well as a collection of holy writings to be studied by laypeople and novices. The compendium of these writings, the entirety of the teachings of the deity, would be portable and require no supernatural aid be needed for the spread of their worship far and wide, purely on the proselytizing of the of the ordained priesthood.

It is only upon reaching 5th level, and the ability to cast 3rd level spells, that a cleric needs to consult a “supernatural servant of the cleric’s deity.”

Who are the Supernatural Servants? 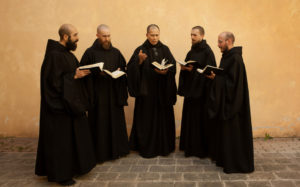 This question isn’t answered in the rulebooks (at least that I can find, I may be wrong…). There is no description of summoning spells available to clerics of first to fourth levels, that would bring forth one of these supernatural servants.

These supernatural beings are different from the Unseen Servant spell of the Magic-User, which is described as a “force”. These servants of the deity have actual power, can likely fight if pressured or beseeched, and are fully aware of the strength of the relationship between the cleric and their god. These servants are likely to be rather senior “Angels” or souls of departed clerics of the deity. (In the World of Weirth(TM) setting I’ll use the term “Vectador/Vectadores” rather than Angel.)

While there is no summoning spell for these beings, there is a spell that does something similar: Chant.

The Power of the Chant

This spell “brings into being a special favor“, in the form of a boon for the cleric and his or her allies, and penalties on their enemies. The Chant’s effect lasts “as long as the cleric continues to chant the mystic syllables and is stationary. An interruption…such as an attack…grappling…will break the spell.”

This sounds an awful lot like the cleric goes into a bit of a trance, or meditative state, in order to achieve the effect, which can be disrupted by physical contact. The sights and sounds of battle apparently are not enough to disturb the trance. It follows that the boon or special favor comes from a supernatural servant, in the same way as a spell would.

But is this the only use for a magical chant?

Could it be that there are other sets of mystic syllables that can be used for contacting the cleric’s supernatural servants, for other boons? For example, the impression of mid-level spells in the mind of the cleric? Or for a cleric to fulfill a support role for other PCs, cleric or not, in their activities or spell-casting?

This begs the question, what else can a meditating, chanting cleric accomplish with a little help from his or her Vectadores allies?

Internet searches brought up some common spiritual effects of chanting, some more believable than others. Some of the gameworthy effects include:

These effects seem highly tailored to a support role, perfect for the nature of the chanting meditation. For example:

While these additional uses for the Chant spell have not been play-tested, I believe they are a very good starting-point for creating an in-game mechanic that will add depth to the experience of playing a cleric PC.

If there is ever cause for a Vectador to become more fully involved in activities on the Prime Material plane, I am considering simply re-skinning the Type III demon (with obvious changes for “Good”) to represent their statistics. I also envision two other types of supernatural servant, a Suvectador – the soul of a lower-level priest of the deity which may perform as a messenger or courier, or perhaps more direct aid to the deity’s servant (re-skin Type I demon), and an Arvectador (re-skin a Type V demon) – a servant of the highest level which would be contacted for the higher level spells (possibly in lieu of the deity herself) or for important issues if divine intercession is required.

Personally, I would use the Vectadores purely as emissaries from the deity to the cleric, with Suvectador performing more menial tasks and Arvectodores coming to the aid of a cleric requesting rescue from a catastrophic situation.

Each deity would have their own council of Vectadores, of all three varieties, in order to carry out the will of the deity . Some deities may have more or fewer Arvectadores acting as a “Council of the Faith”, keeping their mortal servants on the Holy Path of Scripture. Deities also have wildly varying numbers of the Suvectadores to carry out lesser missions.

There are some additional thoughts on Cults and Cultists here.

I appreciate any thoughts or comments you may have.

2 thoughts on “The Unseen Servant – Part One”