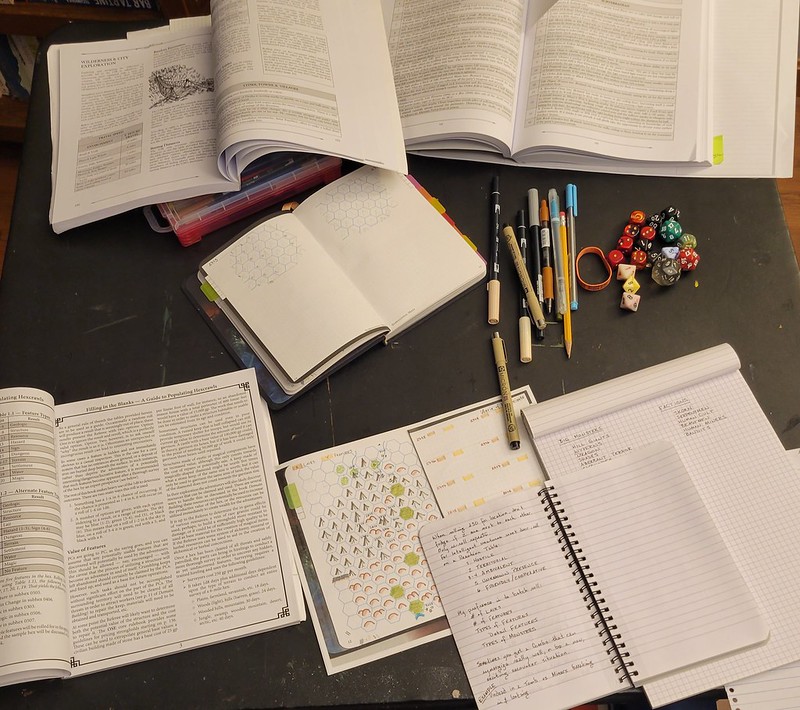 Sean McCoy has a great idea for a group project in 2023, everybody draw a #Megadungeon!

The other day I posted on twitter about a cool little project I’m working on for 2023. Essentially, I’m doing a dungeon room a day, every day, and keeping track of it in a little weekly calendar.

Well, I love dungeons and megadungeon play, but writing a megadungeon is difficult! It takes a lot of energy and it’s hard to know when to work on it and for how long. This simplifies things.

I, too, have been thinking about Megadungeons. A lot. For a long time…
See these posts:

I have even started writing a series of zines on the topic, but have been bogged down by scale creep!

The Underground Architect’s Guide to Dungeon Ecology is done, but the next few booklets are very much WIP. I have in mind a list of things that need to be covered: Factions, Wilderness Integration, Massed Combat, etc, The #Dungeon23 Project will give me a chance to hammer out all of these ideas, and put them together in a read-able format for beginners and veterans alike.

I happen to have a blank Worldbuilder’s Notebook by @vyderac on hand, so I’m going to be using it for this project. The rules will be based on Low Fantasy Gaming for all of the monsters, tricks and traps. The layout and keying of the wilderness above with be using Filling in the Blanks by Todd Leback.

You do not have to get fancy, you can do this with just a plain old quad-ruled composition book if you want!

This week’s Miniature Monday video has a little more detail about what I plan to do, and what it all means. Follow along on Twitter, #dungeon23, or here on the same tag. Leave a comment, or check in with me on twitter, I’d love to chat more about this!

I’m going to throw my hat in the ring and put out a tool that I think will help make this job easier and fit the theme and tone of your campaign.

Dungeon – Wilderness synthesis is the term I have come upon to describe this system of adventure design. The dungeon does not exist in a vacuum. For the purposes of this game aid the Dungeon will be considered a living, if not precisely sentient, component of the Campaign Setting.

The Dungeon is not only living, but instinctively aware of intrusion by creatures or beings from the world above. It is wholly inimical to such intruders and will take steps, through the inhabitants or through the construction of traps and mazes, to dispose of them. (For more on this approach, see Dungeon as Mythic Underworld by Philotemy)

To begin with, the Dungeon comprises all of the underground levels, however many there may be, right on up to the surface of the earth above. The various creatures that may be encountered on the land above the Dungeon will have their lairs below, in simple or complex arrangements.

Here is the video

Sign up now so you don’t miss the next issue.