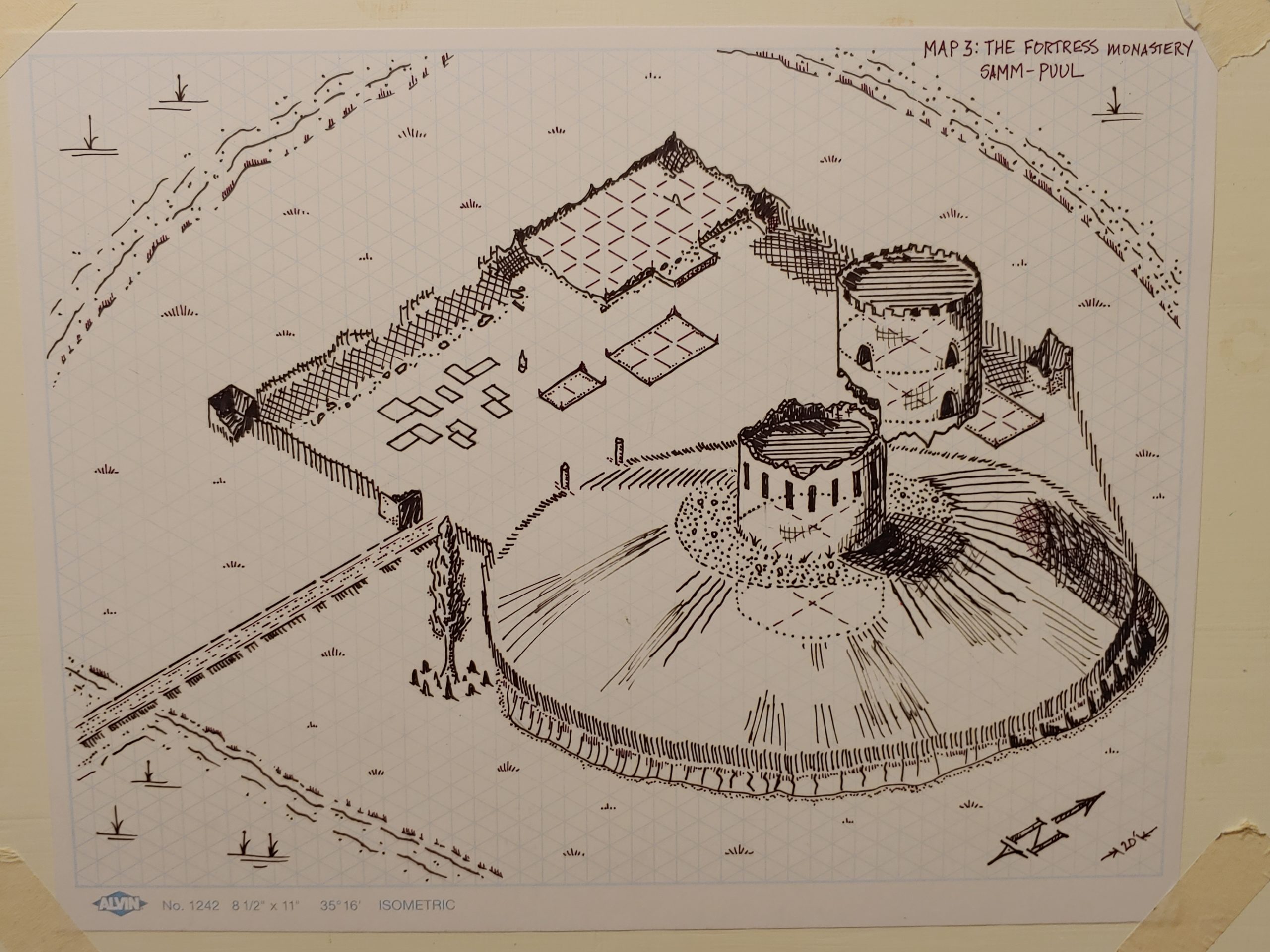 Upon gaining the Tower, the trio gather the rest and update them on the discoveries. They choose to return to camp post-haste, to see what Hildis and Vion are up to.

On the way down, they decide to check out the stairs leading down, as this may be a good place to relocate their camp.

The chamber below contains several large baskets and some cloth bags are scattered about the floor, empty. A large trap-door in the floor near the south wall. All is quiet, save for the sound of the vibration. You thought it was the insects of the bog on the upper level, but down here it’s definitely something different. It matches the vibration of the daggers…

The floor of this level is wood, cypress wood, with an unmistakable odor even with the smell of smoke.

Aziagos manages to lift the trapdoor, it is swollen with moisture (what a change from the rooftop!).

Below, a steep ladder/stair and a low-ceilinged room stacked with baskets and barrels. They descend the ladder, the floor of this low-ceilinged room is dirt, and the walls are stacked with bags, baskets and barrels. The baskets and bags contain cereal grains, summer fruit. The barrels are stacked on their sides, about two feet from the wall. Examination reveals the foodstuffs are coated with a shiny, purplish coating of some kind. Like Oil. The eerie quiet of the cold cellar is disturbed only by the buzzing, humming noise that seems to just vibrate in your bones. The room smells cool and earthy, with a bit of fruit.

Kalder takes a moment to survey the area, the buzzing seems to come from an odd stack of grain bags in the north portion of the root cellar. He attempts to lift a bag and it splits open, revealing more of the purple-tainted grain. Feeling around he finds a stiff leather bag, with objects inside that “clink” together. Opening the bag reveals two polished, but unfinished, stylized bee symbols, two of the three Holy Symbols of Tallorba they have been tasked to find. The polished metal is a purplish-silver, with an oily-looking finish. It is frighteningly similar to the oily coating on the fruits and grains they have found…

Kalder and Lieres mount a search for secret doors, but Kalder only finds a scrap of vellum with information about when the casks were laid down, and a stack of fine, soft blankets and a full wineskin of mead.

Kalder is disappointed that this basement does not connect to the underground structure in some way.

The party exits the basement and the Tower, with Aziagos carrying the vibrating holy symbols. Returning to the camp they decide to confront Hildis and Vion about the note, as they are both awake. Shavanoxil and Orgona tell the returning party members that more of their food has spoiled, this time covered with a hideous purple fungus.

The party is down to one day of full rations. Upon this statement, Hildis and Vion share a “secret smile”, that everyone sees.

Dimble grabs the note, walks over and confronts Hildis & Vion, wanting to discern what they know of the desert beyond the Tower. Hildis says she knows nothing of it, this is the first she’s heard.

“Though not surprising”, she says, “this bog lies upon a nexus to the Labyrinth, a space that touches all worlds. When the magical explosion happened, it could have opened a rift to anywhere.”

Dimble shows her the note, she seems genuinely surprised at its contents. He asks her about the strange chant. She tells him that she and Vion are of Zygarian heritage, and it is simply a meditation in their native tongue.

She then goes on to explain she doesn’t know much about the Labyrinth, or which of the monks used to travel there, she is in charge of the Press-wawr. All she really knows is that recently some monks found a new kind of flower, whether in the bog or in the Labyrinth, she did not know. But she suspects that it grew out of control, sending deadly tendrils into the bodies of any who got too near it.

She then asks for your help in searching the ruin of the Scriptorium in finding the bowl.

The party dissembles, telling her they will help search, but first Kalder wants to use the Finding he is making to discover the location of the missing Sky Metal sword castings. As the group prepares to delve into the cellars beneath the Scriptorium, Kosas discovers the Finding he had made for the witch Xochi is active! In fact it points down and to the W, just beyond the Scriptorium.

Now they have two goals in mind!

They descend the stairs, avoid the spider in the webs above, and pass through the room. The long hall leads to another larger chamber with some rubble and a suspicious-looking animal skull setting in the wreckage of a wooden structure.

Dimble uses an Unseen Servant to move the skull to the W side of the room, at which point a light scratching can be heard from above. There appears to be a secret door, some 9 feet up the wall. A broken knife blade is wedged into the door-edge, and the Unseen Servant is unable to remove it.

Frustrated by an inability to climb up and open the door, and afraid of what lies behind it, they move the skull back. Kalder decides to look more closely at the skull when the scratching noise dies away when the skull is replaced.

Inside the skull is a good-sized burgundy gemstone, somehow affixed with the skull.

He moves it away from its original location, the scratching noises return, more insistent this time. So he puts it back and the party returns to the first room. Turning W they open the “whistling door”. A blast of wind blows out their torches and lantern!

Dimble calls for calm, and enters the room to investigate. He finds a running stream, a pool, and two holes in the W wall where the stream enters and exits. The exit is the source of the blast of air.

On the edge of the room, a stack of large barrels, and the smell of blood. Dimble lights a candle, finds the body of a dead human in black silk robes, a bone tube and a large cork. The cork fits the tube, apparently a scroll-case.

As this is a dead-end (and none want to attempt to follow the stream into the tube!), they go back across the entry chamber. They find the webs on the ceiling in tatters and a dog-sized spider on the E wall. Adora attempts to feed it and calm it, it leaps upon her! 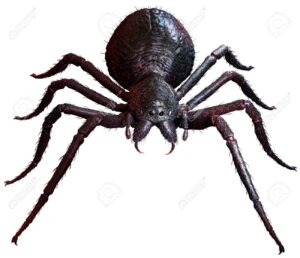 Only by luck is she able to grasp the creature and fling it away, without getting bitten. The spider scrambles up the stairs as quickly as it can!

The party then makes its way East, following the Finding of Sky Metal. They pass through an area of meditation chambers lit by small egg-shaped stones. They crush one with Spellcraft, take another with them.

The next passage smells of oil and rancid butter, with wet, leathery bags on the floor. Adora picks one up, it is slimy and sticky and gross, she gags and drops it again. Aziagos tests whether it is volatile, and sets it afire with a torch. It burns brightly, illuminating the chamber beyond, partially collapsed, the wal riddled with holes big enough for a child to climb in.

The Finding now points due south, and they follow it to a door, the vibration is strong here!

Opening the door actually causes it to crumble into pieces. Beyond a brightly lit room, filled with flowering plants in clay pots and wooden boxes. To the right, a wooden door, dry-rotted, to the left, a long slender bundle wrapped in black silk. The two Sky Metal sword castings, vibrating in harmony with the Holy Symbols and the dagger castings.

When prompted, Vion tells that this is the Library of Botany, flowers and fruit trees collected from around the land and in the Labyrinth. All of the plants are tinted with an oily purple sheen, and those fruit trees that had begun to flower, their flowers have turned black, like unto ash. Around the corner the party can discern a breeze blowing from the door they cam through, to the SW corner of the room, where there is a door. More of an iron grille, it blocks access to a large chamber beyond with a 10 foot wide shaft going down into darkness.

Picking the lock is child’s play for Lieres (it actually crumbles to dust as he works it).

Looking down the shaft, Dimble cannot see the bottom, but they can hear rushing water. He drops a glowing stone, taken from a meditation room, into the shaft. If falls for a moment, splashes into water, then disappears to the south.

Lieres goes down on a rope, sees footprints leading south in the stream-tunnel. He follows them to a precipice where the stream plunges vertically down into darkness. Hearing a noise, he turns to see a large crab in a cone-shaped “shell” that is as big as a bull!

He scrambles to the rope and hauls himself up.

Aziagos and Dimble then go down, followed shortly by Kosas. No sign of this crab. They extend the rope and rappel down the waterfall, getting soaked, but discovering it is only about 30 feet tall. It opens in to a cave with a pool at the E end. Joined by Dimble and Kosas, they tie together and enter the pool in darkness. Guided by Dimble, they swim with the current and find themselves under the wall in another cave!

Climbing out, they find they have reached the end of their rope…

They begin to dry the lantern and get it relit. They can smell smoke. They can see a softly glowing reddish light in a triangular hole, just above them and to the north.

All three sit shivering, wet and cold, as they dry the lantern. Soft clicking and scraping noises can be heard…