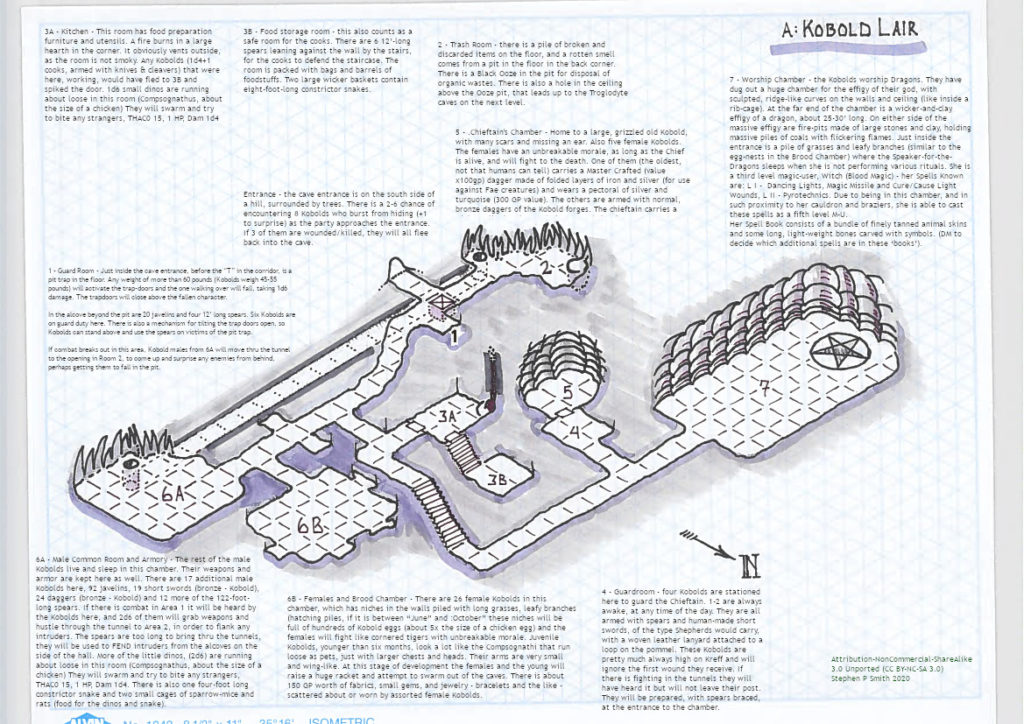 I just threw this together as an experiment. A little WIP for converting B2 The Keep on the Borderlands to World of Weirth.

This is a draft version, the “One Page Dungeon” is purely for sharing the WIP.

Entrance – the cave entrance is on the south side of a hill, surrounded by trees. There is a 2-6 chance of encountering 8 Kobolds who burst from hiding (+1 to surprise) as the party approaches the entrance. If 3 of them are wounded/killed, they will all flee back into the cave.

1 – Guard Room – Just inside the cave entrance, before the “T” in the corridor, is a pit trap in the floor. Any weight of more than 60 pounds (Kobolds weigh 45-55 pounds) will activate the trap-doors and the one walking over will fall, taking 1d6 damage. The trapdoors will close above the fallen character.

In the alcove beyond the pit are 20 javelins and four 12’ long spears. Six Kobolds are on guard duty here. There is also a mechanism for tilting the trap doors open, so Kobolds can stand above and use the spears on victims of the pit trap.

If combat breaks out in this area, Kobold males from 6A will move thru the tunnel to the opening in Room 2, to come up and surprise any enemies from behind, perhaps getting them to fall in the pit.

2 – Trash Room – There is a pile of broken and discarded items on the floor, and a rotten smell comes from a pit in the floor in the back corner. There is a Black Ooze in the pit for disposal of organic wastes. There is also a hole in the ceiling above the Ooze pit, that leads up to the Troglodyte caves on the next level.

3A – Kitchen – This room has food preparation furniture and utensils. A fire burns in a large hearth in the corner. It obviously vents outside, as the room is not smoky. Any Kobolds (1d4+1 cooks, armed with knives & cleavers) that were here, working, would have fled to 3B and spiked the door. 1d6 small dinos are running about loose in this room (Compsognathus, about the size of a chicken) They will swarm and try to bite any strangers, THAC0 15, 1 HP, Dam 1d4

3B – Food storage room – this also counts as a safe room for the cooks. There are 6 12’-long spears leaning against the wall by the stairs, for the cooks to defend the staircase. The room is packed with bags and barrels of foodstuffs. Two large wicker baskets contain eight-foot-long constrictor snakes.

4 – Guardroom – four Kobolds are stationed here to guard the Chieftain. 1-2 are always awake, at any time of the day. They are all armed with spears and human-made short swords, of the type Shepherds would carry, with a woven leather lanyard attached to a loop on the pommel. These Kobolds are pretty much always high on Kreff and will ignore the first wound they receive. If there is fighting in the tunnels they will have heard it but will not leave their post. They will be prepared, with spears braced, at the entrance to the chamber.

5 – Chieftain’s Chamber – Home to a large, grizzled old Kobold, with many scars and missing an ear. Also five female Kobolds. The females have an unbreakable morale, as long as the Chief is alive, and will fight to the death. One of them (the oldest, not that humans can tell) carries a Master Crafted (value x100gp) dagger made of folded layers of iron and silver (for use against Fae creatures) and wears a pectoral of silver and turquoise (300 GP value). The others are armed with normal, bronze daggers of the Kobold forges. The chieftain carries a High-Quality battle axe (value x40GP) that he can use two-handed (as with a STR of 15). The tribe’s treasure vault is here, in chests and baskets (200GP in assorted coins and textile trade goods). There are 3 pet constrictor snakes, 4-6’ long, and a pet (iguana-like) frilled lizard.

6A – Male Common Room and Armory – The rest of the male Kobolds live and sleep in this chamber. Their weapons and armor are kept here as well. There are 17 additional male Kobolds here, 92 javelins, 19 short swords (bronze – Kobold), 24 daggers (bronze – Kobold) and 12 more of the 122-foot-long spears. If there is combat in Area 1 it will be heard by the Kobolds here, and 2d6 of them will grab weapons and hustle through the tunnel to Area 2, in order to flank any intruders. The spears are too long to bring thru the tunnels, they will be used to FEND intruders from the alcoves on the side of the hall. More of the little dinos, (2d6) are running about loose in this room (Compsognathus, about the size of a chicken) They will swarm and try to bite any strangers, THAC0 15, 1 HP, Dam 1d4. There is also one four-foot long constrictor snake and two small cages of sparrow-mice and rats (food for the dinos and snake).

6B – Females and Brood Chamber – There are 26 female Kobolds in this chamber, which has niches in the walls piled with long grasses, leafy branches (hatching piles, if it is between “June” and :October” these niches will be full of hundreds of Kobold eggs (about 5x the size of a chicken egg) and the females will fight like cornered tigers with unbreakable morale. Juvenile Kobolds, younger than six months, look a lot like the Compsognathi that run loose as pets, just with larger chests and heads. Their arms are very small and wing-like. At this stage of development the females and the young will raise a huge racket and attempt to swarm out of the caves. There is about 150 GP worth of fabrics, small gems, and jewelry – bracelets and the like – scattered about or worn by assorted female Kobolds.

7 – Worship Chamber – the Kobolds worship Dragons. They have dug out a huge chamber for the effigy of their god, with sculpted, ridge-like curves on the walls and ceiling (like inside a rib-cage). At the far end of the chamber is a wicker-and-clay effigy of a dragon, about 25-30’ long. On either side of the massive effigy are fire-pits made of large stones and clay, holding massive piles of coals with flickering flames. Just inside the entrance is a pile of grasses and leafy branches (similar to the egg-nests in the Brood Chamber) where the Speaker-for-the-Dragons sleeps when she is not performing various rituals. She is a third level magic-user, Witch (Blood Magic) – her Spells Known are: L I –  Dancing Lights, Magic Missile and Cure/Cause Light Wounds, L II – Pyrotechnics. Due to being in this chamber, and in such proximity to her cauldron and braziers, she is able to cast these spells as a fifth level M-U.

Her Spell Book consists of a bundle of finely tanned animal skins and some long, light-weight bones carved with symbols. (DM to decide which additional spells are in these ‘books’).

Lessons learned: This takes a lot longer than you might think, especially when you are unfamiliar with the tools. I could have arranged the text blocks better ( I still can, and probably will, in the future!) I need to look at a lot more One Page Dungeons to get a better sense of layout.

Thanks for checking it out, C&C welcome!