This year, in addition to the usual Pirate-themed game, we put together a scenario based on the story of King Kong. Of course everyone is familiar with this story, and knows it’s too big to fit the whole thing into one evening of gaming, so we focused on the rescue of Ann Darrow and the harrowing flight back to the ship. 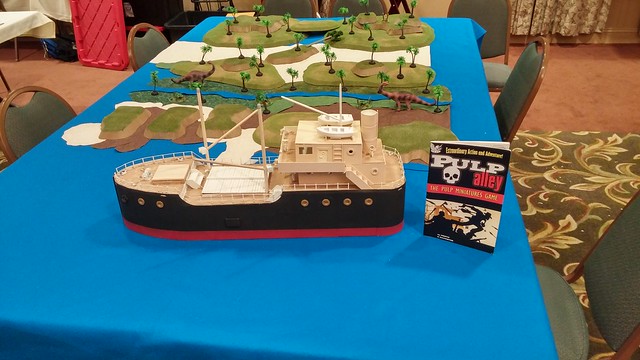 Ann is tied to the sacrificial poles, there at the top left: 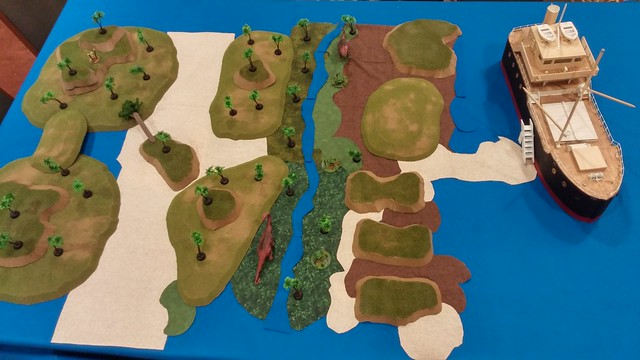 Here you can see the ship’s crew as Ohio Jones prepares to rescue Ann from her plight. The angry and hostile natives are right behind them! 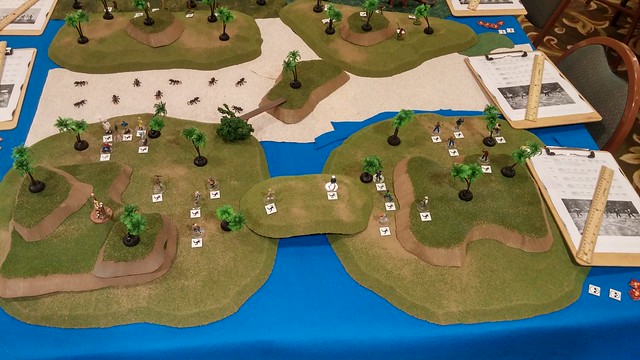 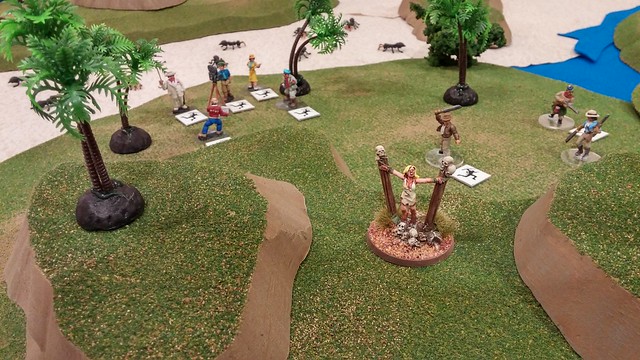 Preparing to skirt around the natives on the other side of the gorge, the film crew starts shooting up the giant ants. Thurston Howell the 2nd doesn’t quite know what to do with himself! 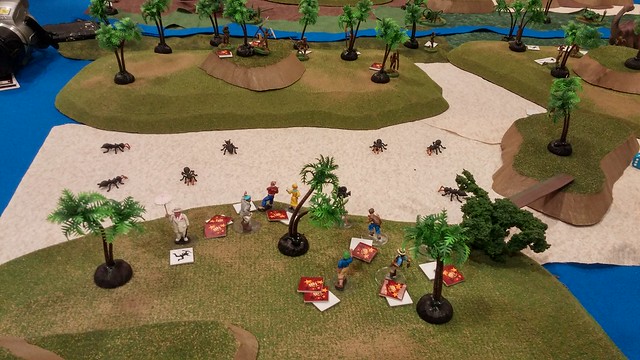 Unwilling to face the monstrosities in the other side of the gorge, the ship’s crew start climbing down the perilous cliffs (“I saw the movie, I know what happens on that tree!“). Two of them fail, and fall to the ground. Miraculously, they survive! 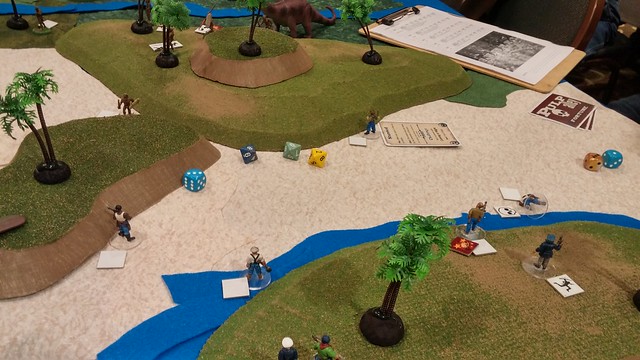 Ohio Jones runs with Ann to the fallen tree that spans the gorge as Kong bursts from his cave! Ohio hands Ann off to Sam and they crawl across the log. 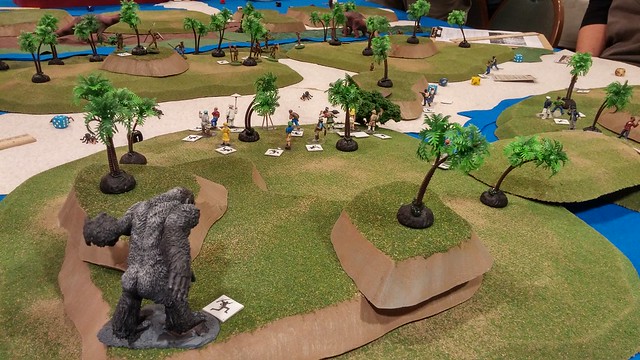 Sam, already wounded by an arrow to the knee, is hit again by Tannay and goes KO! Ann is left all alone, while the natives howl with delight, accompanying Kong’s howls of fury.

Tanny moves up to re-capture Ann. 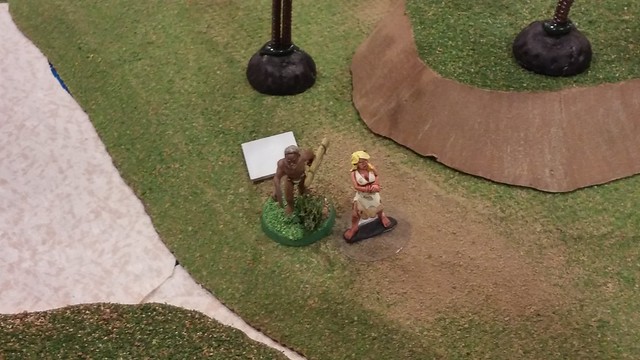 Meanwhile, a few of the ship’s crew decide that the log bridge might not be so bad, and scramble across. Leaving the film crew to deal with Kong. 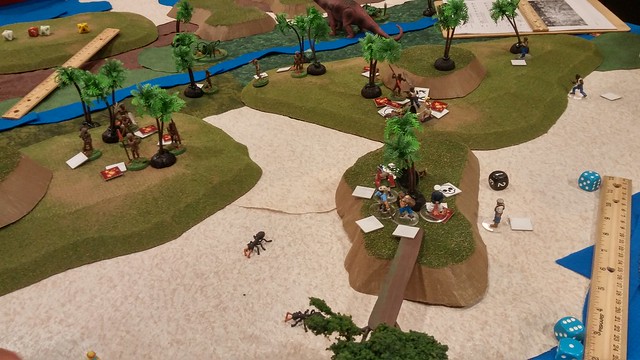 Samson, Eliza and Nick all shot at Kong, while Howell runs behind him in an effort to hide! 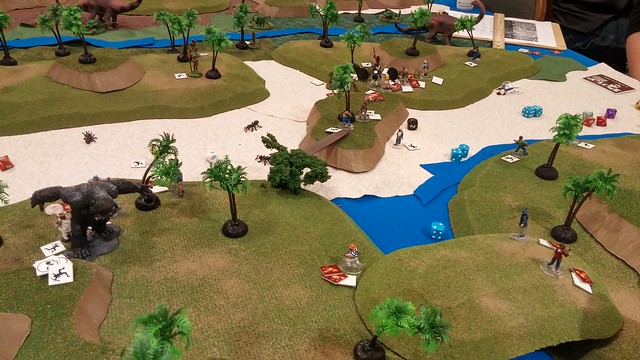 Capt Bob rushes to Ann’s side and gets into a brawl with Tannay and his brothers. As spears and arrows fly across the gorge, Bob is able to KO Tannay and Pinkay and hoists Ann over his shoulder. 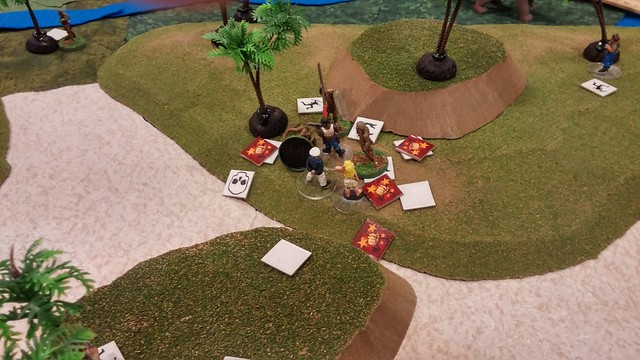 Eliza is able to shoot and wound Kong, driving him back. Unfortunately this means he tramples the hapless Thurston Howell the 2nd. Good thing his wife and baby boy (Thurston Howell III, who will go on to have an amazing “island adventure” of his own, later) are home safe. 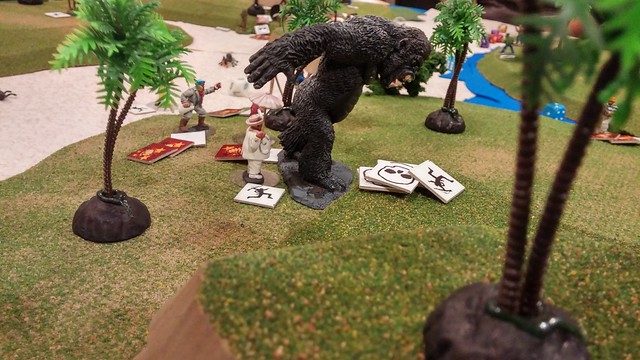 A massive battle royale for Ann begins, Peters goes down, Roberts manages to dodge out, and Capt Bob manages to hang on to Ann. 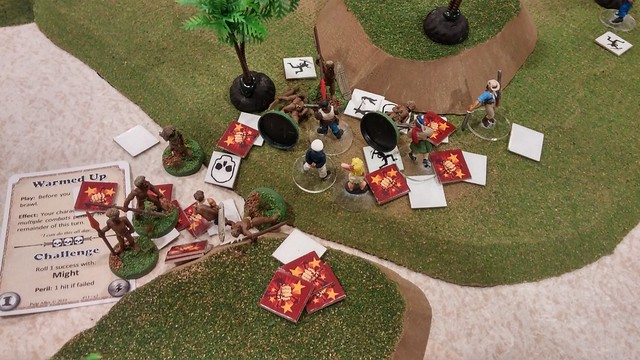 Kong tosses the fallen tree aside and leaps across the gorge. Ohio Jones stands his ground, emptying his pistol at Kong. Behind him, the battle royale carries on as more natives and crewmembers enter the fray. The Breadfruit Queen charges Fred and stabs at him with her obsidian blade. It looks grim but he jumps back, “I’m alright!”.
Lagi and Capt Bob exchange wounds, Moro engages with Fred and Holt is able to grab Ann! 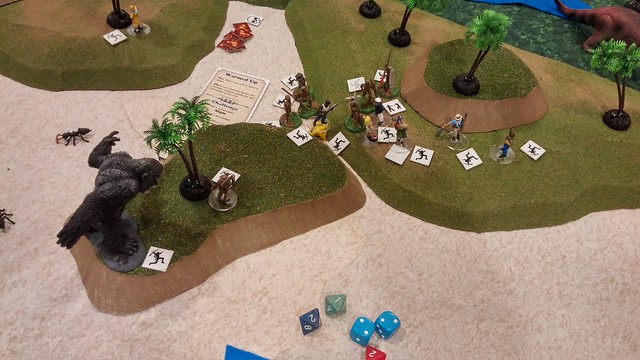 Aaah! Will the horrors on this island never cease! A T Rex erupts from the jungle, bellowing a challenge to Kong. 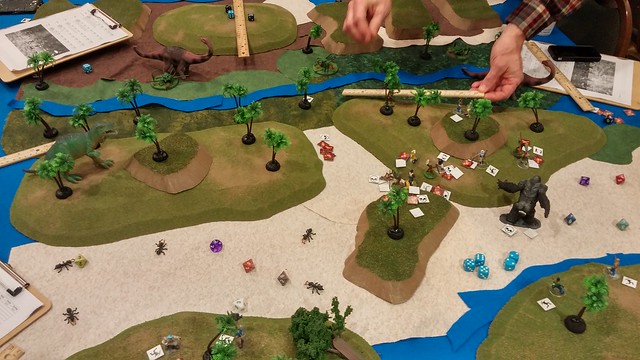 Heedless of the raging T Rex, Kong approaches the object of his affection. 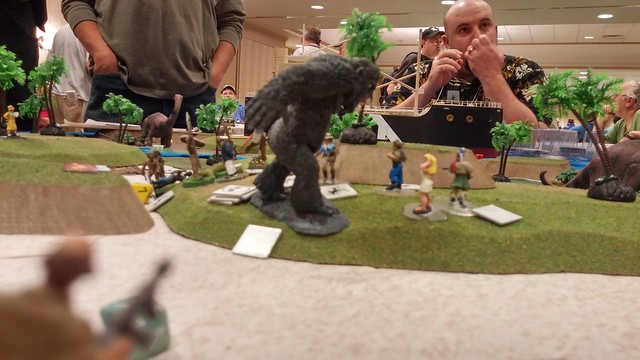 So close, yet so far. Capt Bob rushes Nanise to clear the way for Holt to run to the river with Ann. 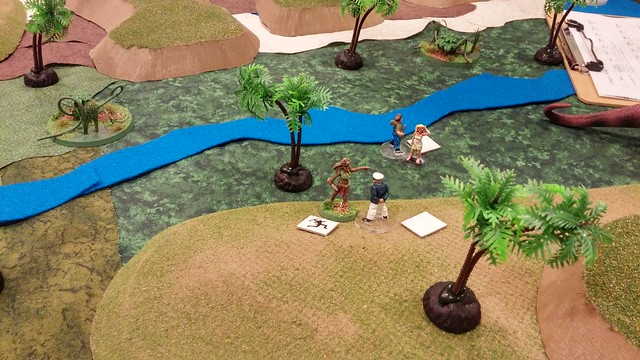 Bill the cameraman is getting some amazing footage of Kong, unaware of the T Rex bearing down on him. 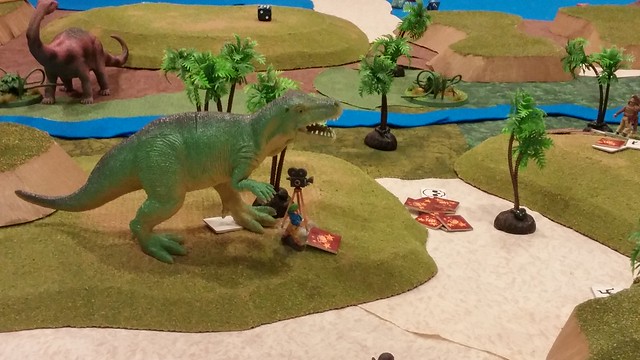 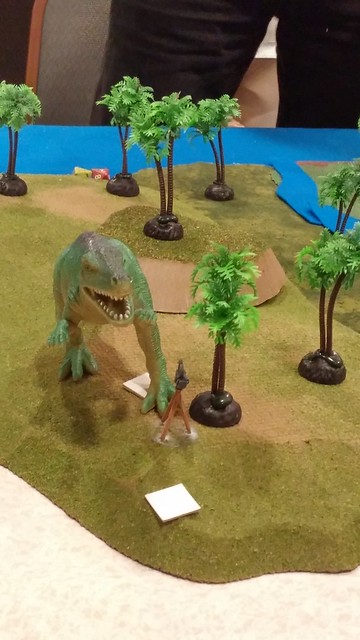 (Note: in the game the player for Bill moved him to this spot, going for extra VP for getting footage of Kong. Everyone told him not to leave Bill there. He said, “Don’t worry, I’ve got an eye for distance, T Rex is 13 inches away. Bill will be fine.” It was 11 3/4 inches…)

Kong rushes past McCabe, clambering over the hill in an effort to get to Ann. Alas, she remains just out of his reach. Holt is terrified, but manages to keep it together. 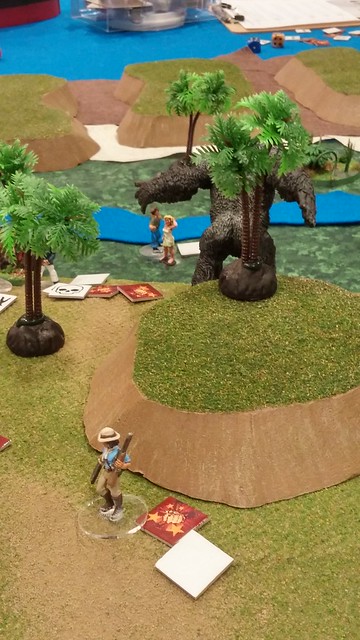 As Holt scrambles up the ladder with Ann, the rest of the crew hurl jugs of cloroform at Kong. Each successive jug shatters and envelopes Kong in a cloud of soporific vapor. The mighty beast struggles to reach Ann one last time, but a direct hit on his forehead fills his lungs with gas and down he goes. 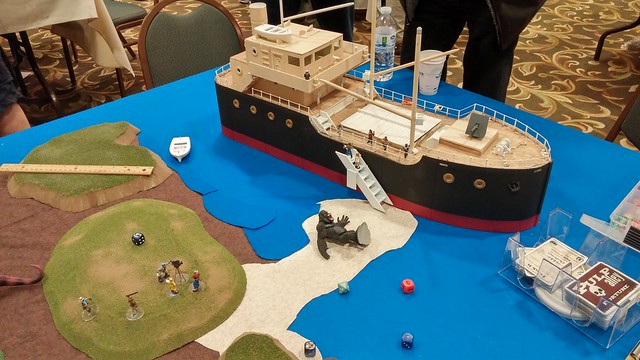 This game was truly one of the best times I’ve ever had at a Con. It was a nail-biter from the time Kong hit the board until the very end.

Amazingly, the character Holt was a follower, was the final surviving member of his crew, and was being played by a newcomer to Pulp Alley who seemed to be having the time of her life. Even when her Leader was KO she kept playing the scenario and didn’t get distracted by showing off (Cameraman Bill) or getting tied up fighting the natives.

We’ll be running this game again at Huzzah! in May. See you there!