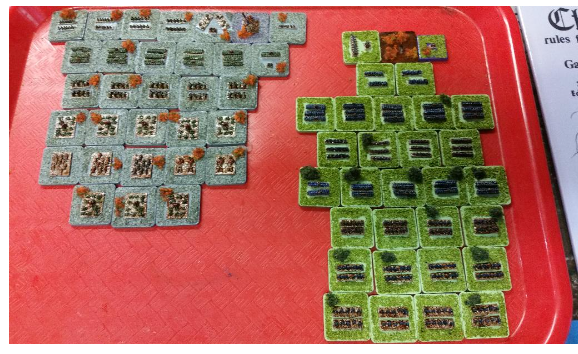 Baron Elizabeth (@RobertB28871164 on twitter) is the first to complete his game for Scenario 1 of the Campaign Carnival 2022!

Check out this amazing game:

Rules- Chainmail (3rd edition) using 2mm miniatures on 1” bases, each base represents 2 units of 20 troops. Chainmail movement rates are halved, and the games are played on a 3’x3’ area. The Orcs have the gray flocked bases, and the humans have the green flocked bases.

Force Composition- I’m doing orcs vs humans inspired by Jon Mollinson’s Chainmail campaign. He used my name in his campaign (Baron Elizabeth is my wife), and I’m going to use that part of his campaign to set these campaign carnival games. This will be the start of my Whitehart Wood Chainmail Campaign. I’m choosing to do the forces of Baron Elizabeth (humans) vs Orcs (Gnashers). A small force of Gnashers reforms in the aftermath of Mollinson’s campaign to once again threaten Baron Elizabeth farm, and the Baroness musters her forces to match the reformed Orc band. She hopes to fight off the Orcs, and continue to clear her forest hex and begin construction of a keep wall. 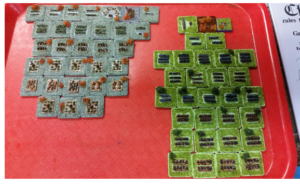 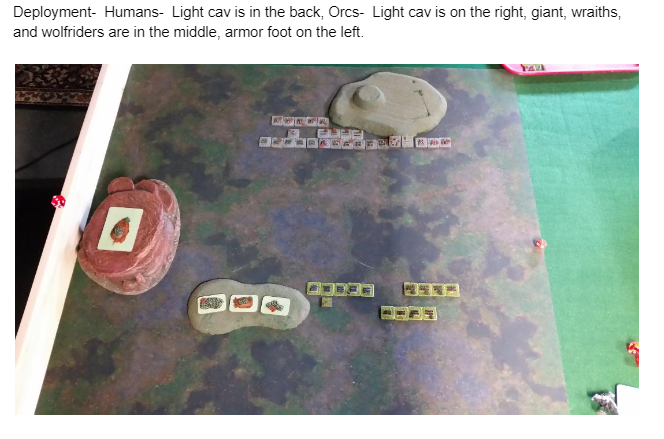 The scenario calls for the defender to be outnumbered 2:1… it’s amazing what that actually looks like on the table!

Orcs, giant, and wraiths all move forward, archers get off a volley of shots on med cav before they get charged by the light cav.  Goblin wolfriders (med cav) charge the armor foot and cause them to rout at the sight of the charging horde.  They turn backs to the goblins and retreat back disordered.

In turn two the orcs attack, while most of the human forces attempt to flee!

Turn 2-  Orcs win initiative roll again and elect to go first, recharging the routed armor foot with the med cav, and continuing to melee light cav vs med cav.  Archers and foot troops move forward.  Archers can’t get off shots on light cav before they move off the board, scoring 2VP.  Wolves do no damage vs med cav, med cav does 2 casualties and they stay in combat.  The rest of the orcs and the monsters move forward.  The units that have been in melee are at 4 fatigue and will fight one class lower next turn.  I’m ruling that spells go off last in a turn, so at the end of the turn the seer’s fireball goes off  killing 6 units of wolfriders and the hero fails his save and perishes also, counting as captured and getting 2VP.  The remaining wolfriders fail their morale due to casualties and rout backwards.

Turn three sees some casualties on both sides, but the Humans continue to rack up points!

Turn 3-  Humans win initiative and elect to move first, the armor foot moves south slowly, the seer elects to move off the table without casting another spell, seeing how close the giant is, scoring 2VP.  The wraiths charge the med cav, paralyzing 1 unit.  They swing back and take out the remaining wolf unit.   The archers stand still and get off 2 volleys of arrows on the armor foot, taking out 5 units total.The remaining wolfriders are bolstered by the passing giant and regroup.  The orc infantry continues forward.

Turn 4–  And here’s how it ends.  Humans win initiative and elect to move first, but the armor foot moves too slowly to get out of the giant’s charge range, and the regrouped wolfriders ¼ turn right and are able to charge the med cav.  The weights and wolfriders’ flank charge destroy the med cav, and the giant destroys the remaining armor foot.

Wow! The orcs started coming back, but it was too little, too late!

The final results were pretty decent in terms of casualties, too:

Conclusion-  Humans win 4-6, with the Seer and the Light Cav escaping off the board to safety,  the other 2 units being destroyed in combat.  The humans managed to destroy 1 unit of 6 light cav (wolves), and capture a hero

Really looking forward to finding out who wins out there on the other tables!

If you’d like to participate, there is still some time. The AARs aren’t due until 21 June.

PDF Zine of Campaign Carnival 2022 Rules and Scenario One

Campaign Carnival Rules and Description on the itchio download store. The WIP PDF zine version of the Carnival rules is free. At the end of the development process, you’ll be able to order a physical copy, with some other goodies in the package!

Thanks for reading and I am really looking forward to hearing about your games!