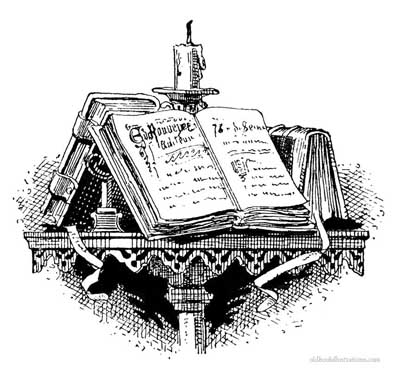 Episodes 27-28: The Monastery of Samm-Puul

We pick up where we left off with Lieres and Shavanoxil in the Compound campsite. She is still suffering from the rash/bug bites. Also, she begins to vomit and have chills.

Orgona goes to assist her, finds a rat skull on a thong necklace. “Glued” inside the skull is a small garnet. Wethis starts looking around the rubble, finds another of the amulets.

Shavanoxil decides to look through the possessions of the Cavalry that were left behind, as Lieres’ herb-box has no more assistance for her. She finds a small coffer, made of brass-bound wood. Inside are four compartments, holding three small bottles of a shimmering pearlescent liquid, transformed Mother’s Milk! She decides to save the three applications, as she is tough enough to withstand her current food-poisoning.

The other four, still on the island, go back down into the tunnel, determined to save Xorimal, Shakerica and Madeus. Arnbjorg takes the vials of Mother’s Milk with her.

They go past the slime trap, down some stairs, and Kalder uses a cantrip to push aside some broken shards of pottery on the landing of the stairwell down. They find the door at the bottom of the stairs has been smashed IN.

They come around the corner, right into an ambush! Crossbow bolts fly, no one is hurt, so they return fire and manage to pincushion the two human men-at-arms. They are dressed in yellow tabards with the flaming eye icon. As they approach the bodies, they hear footsteps running off into the darkness.

They decide to go north, as there are only two sets of tracks in the dust. They go through a door into the Hall of Sarcophagi. All are properly marked with the Rune of Departure. They make their way along, nearly to the end of the long corridor, when – behind them – a door slams shut!

They run back to find the door has closed behind them. Kalder opens it with a KNOCK spell.

The party returned to the first portion of the complex and moved toward the intersection. In a shocking battle, including a circle of DARKNESS, the party managed to defeat the M@A and mipokop, though Kalder was badly skewered by two spears. Arnbjorg fired her crossbow into the Darkness to stave off the rear attack, while Kosas and Aziagos dueled the remaining mipokop. When they were dead, the party fled down a hallway, possibly South, and followed it to a hole punched in the corridor wall, revealing an excavation. Arnbjorg did some first aid and healing activities, using Tibane and Brandy.

A voice (harsh and raspy, as though with a sore throat) from the passageway demanded that the group surrender and turn over the jewel.

Lieres made a “bomb” and carried it out into the hallway to “negotiate”, while actually letting Aziagos and Kosas prepare to attack.

The voice demanded the jewel, or its location. Lieres gave him the runaround.

An area of DARKNESS engulfed the excavated hole and plunged the group into blindness. Lieres continued to taunt, Kosas transformed into his Dire Wolf form, and Aziagos prepared to charge.

Unknown to the others, Lieres was magicked, freezing him in place!

The gravelly voice made one more demand, when there was no reply, he shoved something into the excavated passage, which knocked Lieres over. A final demand, no response, and Aziagos readied his mace and charged out of the darkness, glancing right he saw a tall figure in dark green tabard and a yellow helm emblazoned with the fiery icon, and the 2 M@A – who fired their crossbows at him. One hit, hard, the other grazed his shoulder.

The rest of the group piled out into the corridor, trampling but not stumbling upon Lieres and the two dead companions. Aziagos and Kibble went right to fight the man in the green tabard, shoving past the M@A in yellow who only managed to get in a bash with his crossbow butt. Aziagos smashed the M-U in the chest, sending him sprawling, just as Kibble leapt upon him, knocked him flat and got a death-grip on his left arm. Bones crunched and the dog continued to savage the man, nearly tearing his arm loose.

Kosas-wolf charged the M@A in the yellow tabard, knocking him down and tearing out his throat!

Kalder spotted the mipokop to the left and cast HOLD PERSON to immobilize them. They failed their saves miserably, were frozen in place, with spears held high.

With a shout of defiance Arnbjorg charged the mipokop and stabbed them to death with her boar spear. They crashed to the ground, black blood flowing freely. She searched both bodies quickly, and found 66 SP in the mipokop’s pouches. When she turned to face the magic-user…she saw that all opposition had been laid low.

While Shavanoxil looked to Aziagos’ wounds, Kalder worked the Finding and Arnbjorg searched the bodies of the M@A and man in the yellow helm. He was wearing rugged black chainmail armor under his green and purple tabard, and the linens about his face, under the helmet, revealed wicked, oozing pustules of corruption. His eyes were bloodshot, with great purple, discolored bags under them. Several of his teeth were missing, the rest blackened and rotted. He carried a wicked hooked mace, made of rough black iron with polished flanges. She discovered all five of the bodies were wearing amulets: rat skulls with small garnets pasted inside. She collected these for study later.

Moving as quickly as possible, they follow the finding to Shakerica, encountering a locked room where small reptilian humanoids cowered with their mining tools, clacking and chirping in their weird language. Aziagos gave them great handfuls of rations, which they fell upon with relish.

Around the corner of the dirt-covered passage, finding another locked door, somehow ensorcelled to break Lieres’ picking tools! They bashed the door open, revealing a sleeping chamber piled with smelly furs, bags of bloody gobbets of meat, and filthy strips of cloth. A pile of small bones and refuse in the corner. Once-fine wall-hangings had been hacked and torn.

Behind the hanging on the southern wall, a concealed door with a simple latch. Opening the door they find Shakerica bound and gagged in her smallclothes, stripped of her armor. They free her and Shavanoxil applies first aid. Shakerica is terrified, shaken up and on the verge of tears, with Shavanoxil’s help she is able to pull herself together enough to tell some bits of what happened.

Still shaky, she bolts through the door on the other side of the concealed room, in a panic, looking for her clothes and armor. The rest follow, into a small room that is a Chancellor’s office turned into a magic-user’s study. Lots of scrolls with accounts and ledgers scattered all around. Crop and honey reports, etc. A large brazier stands in the corner, its pile of coals burned down to ash.

Aziagos, Shavanoxil and Kalder dig into the desk and chests, find the Magic-User’s spell books, ceremonial robes (dark green, almost black, smell smoky, like a campfire), 10 GP hidden in the desk, the Magic-User’s crossbow and quiver setting atop a blood-smudged parchment with a crude map sketched on it. Shavanoxil scoops up the ceremonial garb, stuffs it into her pack.

In the chests, a load of exploration gear, including long ropes of spiderweed, hammers and spikes, candles, oil flasks, gloves and loose strips of linen. More men’s clothing, the fine clothes of a Ris and simple traveling garb, Shakerica’s clothes and armor were stashed in one of them as well.

Pulling all of this out onto the floor, they found a hidden panel in the side, revealing a trove of SP wrapped in palm leaves, about 50 SP per bundle, a quick count says 40 bundles!

In the desk are four codices, which Kalder and Shavanoxil took an interest in.

Two slim volumes, about 8” x 10” x 2” seemed to contain words of magic in Lemurian and diagrams of hand gestures. They will need about an hour to try to determine the nature of the magical writings, so they stash the books and carry on with the search. The third codex was thicker, 5” x 7” x 3”, with sketches of star charts, constellations, astrological and calendrical information (The Magic-User’s ephemeris). The fourth book, about 6” x 9” x 3”, also written in a mix of Lemurian and Xythian, is the Magic-User’s grimoire, his notes and sketches and hand-diagrams for creating spell formulae. 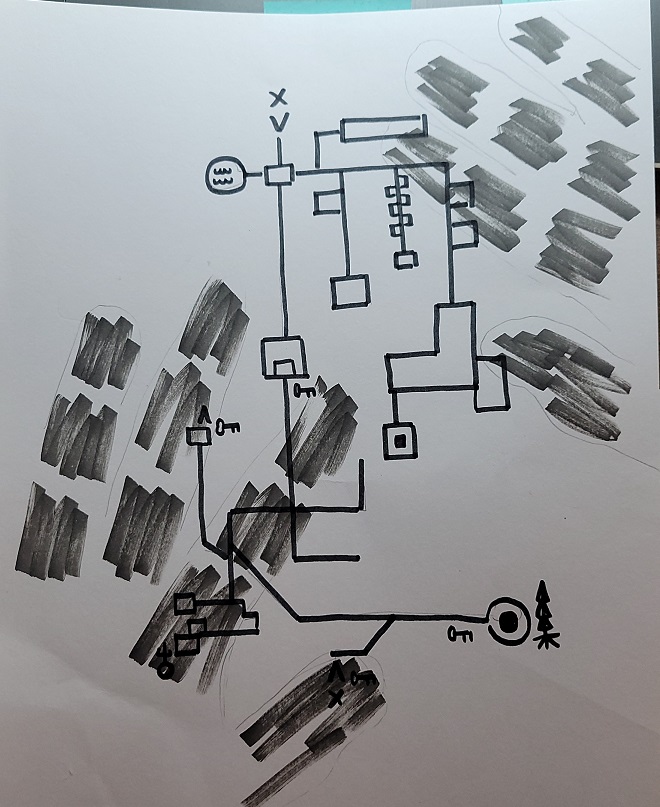 One page in the ephemeris catches Kalder’s eye, a diagram of the stars and schedule of eclipses for the current season (the next solar eclipse is on 6 Hielik, in about ten days!!). It shows the star Argamot in the constellation of the Labyrinth, with a notation indicating 11 Zazel, at midnight precisely it was converged upon the Entry Star. In the margin is a scribble (in Lemurian), “the shabolex comes to open the way!! Where is the jewel?” the date 6 Hielik is written next to this, and circled.

Arnbjorg is sitting in the corner, on a stool, trying to figure out the skull-and-garnet amulets all five dead men were wearing – she determines the hexagram painted in blood upon the crown of each rat skull is a variation of the Hex of Departure, with the addition of a small circle topped by a trident.

Simple Spyglass, made of some kind of matte-black metal, in a leather case (Kalder?)

Hammer, 10+spikes in a wooden box

3 pots of ink, two in clay pots, one in a crystal pot, obviously high quality (Kalder)

Treasure XP 2,266 (plus any trade goods extracted from the site)