The Red Dragon Tong keeps a small farm out in the Delta where they grow, um, hops, as a cash crop to support their other enterprises.  Every week or so they make a trip out to harvest some of the crop and return to sell it in the city.

Unbeknownst to Dr. Koo and the Red Dragons the mysterious Standing Stone near the farm (which emits strange lights and sounds from time to time) is a sacred spot for the Sisterhood of Kin-Yan. Not very active, this Standing Stone is only utilized when there is a full moon on the night of the Summer Solstice. On that night, which only happens every 70-some years, the Stone becomes a tremendous source of mystical energy.

Today a group of the Sisters travel to the Stone to make preparations for their ceremony. Imagine their shock to discover this little farm! Enraged to find this blasphemy of their sacred ground, the Sisters attack, attempting to destroy the farm and drive off the Red Dragons.

Since this is just a simple pick-up job, Dr. Koo visits his office in Huang Pu Downtown District (success = shift die type up rolling for initiative) and sends Number 10 Ox to the Warehouse in Port City District (success = +1 Backup or Gear at end of scenario, yet he fails to get 2 successes on 3d8 vs Might, so is delayed, arriving on Turn 2).

Chao Sing of the Sisterhood stopped in to the flophouse they maintain in Port City District and recruited a sailor to accompany them (to help carry the supplies no doubt, and unlikely to be missed if he happens to not return!). Meizhen went to the Temple in the Delta District to perform a blessing ritual (success = start game with 1 extra Fortune Card).

The Red Dragons begin the scenario in and around the Crops & Sampan. The Sisters begin on the trail. 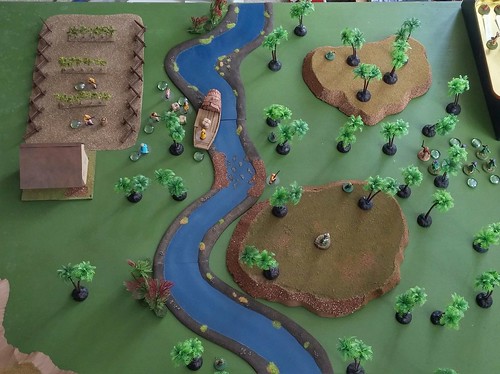 Some highlights of the story:

Dim Sum and Chow Fat open fire on two of the sisters from the field, but miss. The Sisters managed to get across the river and dispose of the two Followers easily. 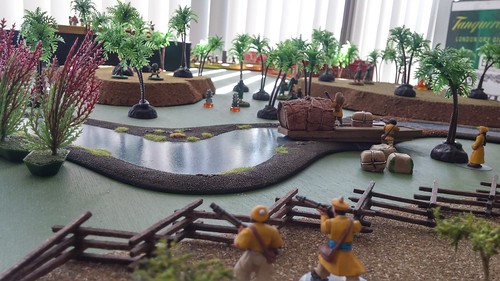 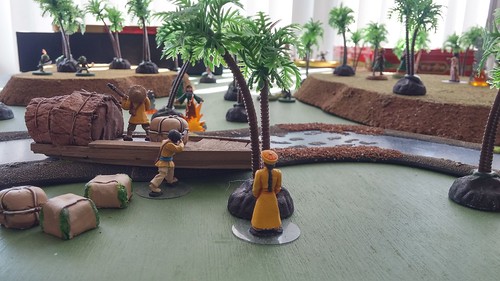 Sisters Chao Sing and Jiao are embattled by Swamp Goblins! 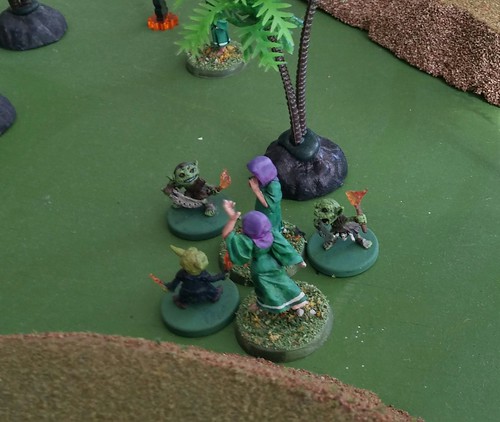 Meizhen and Lily battle near the eldritch stone, too near it turns out, as Meizhen’s magic is mirrored by the stone and a terrible dark presence begins to manifest 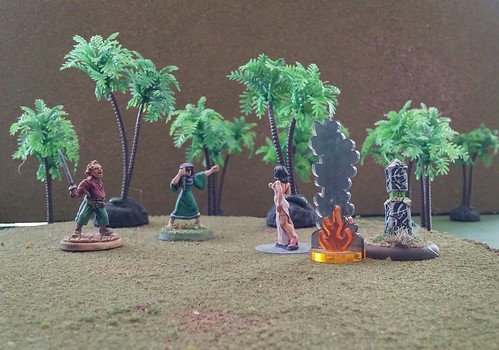 What has become of Lily!? 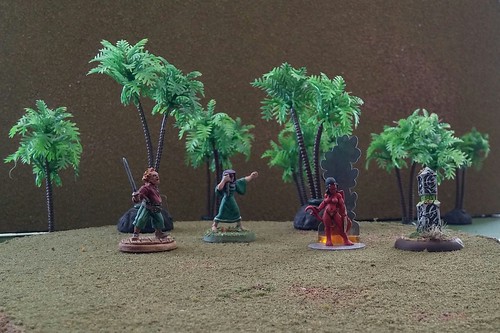 At the end of the scenario, all but one of the Sisters have been Knocked Out or driven off, while the Dragons’ Leader and Sidekick maintain control of the plot points. Koo’s Ally Lily has vanished, replaced by a Daemonic figure of unknown provenance!

What more devilry may occur ad darkness falls and the moon rises over the Eldritch Stone on this auspicious night?

Tune in next time for the thrilling continuation!