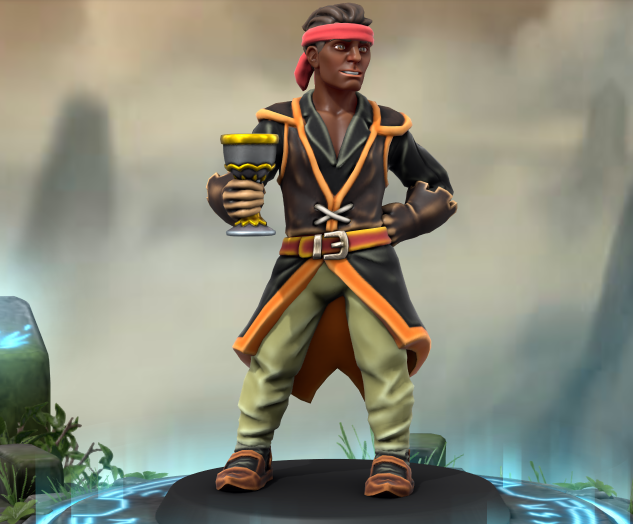 Portasbol and the Cemetery Exploration

The party has arrived at Portasbol (Port-town) and are setting up camp with the Caravan in the space allotted outside the walls, yet well-protected with fetishes and sigils.

Epaph takes the lead in setting up camp, while Herthrudr goes into town on some business.

Kalder and Lieres decide to go for a stroll, Oxardozius stays with Epaph to set up. They wander through the camp, coming across the fellow who received the box from the alleged ghost on the trail a couple of nights ago. The man’s wife loses her patience and sells the box to the pair for 6 GP, rather than the 10 he was asking.

Coming to the end of the encampment they found themselves on the edge of the cemetery, a beautifully kept up place with many tombstones, headstones, some statues and even a few mausoleums. Kalder is surprised by a young man in a lion-skin loincloth, one of the Savannah Nomads*, Lieres moves to attack, but the young man attempts to flee. Kalder moves to trip the running boy, but causes a crash, sending them both tumbling to the ground. Lieres pounces, the young man grabs his wrist, and as the Nomad’s eyes roll all the way back in his head he hisses, “You must put the pieces back together!”

He then faints dead away.

Kalder searches the young Nomad, taking his belt pouch (containing only a flint, steel and kindling) and a scroll-case from his poke. The scroll case contains a handful of scraps of parchment and vellum, with scribbles of writing on them.

Kalder keeps these for later, as neither he nor Lieres can determine the language of the writings.

The pair return to the camp. Herthrudr has returned, stating she has found lodging for the crewe at the house of her friend and business partner, Goravir Ploon – A Telantean Aristocrat of Portasbol. Kalder shows her the parchment scraps, and she says the language is High Telantean, the language of the nobility of Zygaria. She would be glad to translate the scraps later tonight.

The Home Of Master Ploon

Ploon has a large and lovely half-timbered home of some 3-4 stories, one of the tallest in Portasbol. His well-trained and cheerful staff take care of the crewe, getting them rooms, hot water for bathing and light refreshments. The crewe are invited to dine with the Master’s other guest in the Dining Room tonight, though the Master himself is out for the evening. Upon dressing for dinner, the crewe discovers Herthrudr has left the mansion to join the Master in business.

Dinner is hosted by Balthus (a Xythian gentleman of middle age), the other guest of the household, who introduces himself as Master Ploon’s friend and business partner, and alludes that he may be a bit of an old-time adventurer himself.

Balthus persuades the PCs to “inventory” Herthrudr’s wagon overnight (for 10 GP each to Kalder and Lieres). He gives them a secret signal to get back in the town after curfew.

Kalder and Lieres go out to the camp and are intercepted by the mangy dog that Lieres fed the other night. It licks his hands, he feeds it again, and heels right by his side. Lieres decides to embrace it.

t the camp they pair regale the guards with a tale of girls and boozing to come, with Lieres laying it on thick while Kalder climbs in the wagon and rifles through the boxes and barrels. This “inventory of the wagon” is a bit of a surprise, discovering a far different cargo than they were expecting (iron weapons, bronze armor, and powerful drugs/poisons). After assuring the men-at-arms guarding the wagon that all was well, K & L go to the cemetery to “see what there is to see”.

It is full dark now, and only Kibble (the stray dog that has attached itself to Lieres) is able to spot the young man who followed them into the cemetery earlier in the day, hiding in the tall grasses near the gate. The Nomad rushes at Lieres, while Kalder throws a knife. The Nomad fails in attempting to bash Lieres’ skull in with a (human thigh??) bone club. Lieres pushes back against the attack, and Kalder is able to blast him, full in the face, with a casting of Crystal Shards, knocking him flat. Not knowing if he was dead or dying, Lieres bound his wounds and performed the Ritual of Departure, drawing the Hex on his abdomen with charcoal.

The two make their way into the cemetery with the dog leading the way, until they get closer to one of the Mausoleums. They can definitely hear a voice inside calling out, perhaps singing or chanting.

Lieres picks the lock, lights a lantern, and they go in. Until now the dog, Kibble, has been following along and behaving to simple commands. He will not, however, go down the stairs! He whines a bit, lays down, resting his heads on his forepaws.

Lieres and Kalder go down the steps without him.

At the bottom they find an empty chamber with a layer of fog on the floor, just over their ankles.. They move across it, through some open double doors, and into a larger room with a sarcophagus on a short dais. They can see the Hex of Departure has been defaced, they also notice that sounds and colors seem to be muted, not sharp or shiny. There are some paintings hanging on the walls, mostly landscapes, but one is of a flower. THIS painting is vibrant. THIS painting is colorful, and it practically invites you to lean in and smell it (the  two do, it smells like cinnamon and spice).

The broken pieces are on the floor. Reassembled, the carvings on the pieces and the large portion of the lid inscription read, “Here lies Alexarthos Chodonakos, traveler, artist and lover of flowers. May he be remembered by this plaque and the paintings he loved to create.”

They can hear the chanting getting louder and more shrill. One door is locked, so Lieres picks that lock and they go through, into a treasure vault (possibly). Again the chanting is louder, coming from the left, while off to the right, down near the floor, is an odd, dark stain. Closer inspection reveals it to be a sticky substance, like honey or sap, and it’s oozing from around a loose stone in the wall. Lieres pries the loose stone free, revealing a bucket-full of creamy, whitish centipedes. About 2-3 inches long, they spread out over the feet and the floor, scurrying about, and through the various doorways. Some don’t scurry, but stop to eat the sap (or slime, or whatever it is).

The chanting takes on a more ominous tone, and Kalder can feel a vibration in the air, as though being near a large drum. The two men move across the room and, entering a foggy hallway, come into a round chamber with a bizarre scene:

In the middle of the room is a rusty, dilapidated metal cage, large, about 8 feet on a side. In it is a moth-eaten haggard looking parrot, all red, that is bobbing up-and-down and side-to-side. The chanting is coming from the bird, focused on a man kneeling in front of it, hands grasping the decaying cage. It is loud, both take Luck Saves and only Kalder passes. Lieres loses a point of Sanity.

The chanting is in a harsh, guttural language, made even more difficult to listen to by the shrill tone of the bird and its rotting beak. The chanting grows in force and volume, as does the vibration in the air, almost a pounding now.

Kalder and Lieres grab each by the shoulders and formulate a plan. Lieres begins to shake and stutter (losing another point of Sanity) as they decide to douse the man in oil and set him alight!

As they do so the chanting reaches a crescendo, the air is literally pounding as though with a mighty thunder! The kneeling man, otherwise oblivious to the invaders, is splashed with the lamp oil and set alight by Kalder. He stands, shrieking in a hideous voice, and flails away out of the room, down the hall, and out of sight.

There is a sudden silence, the chanting has stopped and the spell seems to be broken! It is! In a most catastrophic way. The resulting thunderclap knocks Lieres and Kalder unconscious for some time.

Hours later, Lieres awakes, is able to refill the lantern with trembling fingers, and awaken Kalder. Both are bleeding from their ears and noses, their faces awash in blood. They struggle to their feet and trace their way back out of the mausoleum. Upon reaching the entry chamber, there is a light coming from the next room, one they had not investigated. They can see a large (6-8 foot diameter) blue sphere with a white top setting on the floor in an alcove.

Deciding discretion is the better part of valor, the two men make their way up the stairs, where Kibble is delirious to see them. Without any conversation they make their way to the wall, give the signal, and return to the town.

Upon returning to the house of Ploon, they make their way to the garret, where Balthus is waiting, for his “inventory”. He is amused by the state of the men and is glad to pay them. They return to their rooms just before dawn, to fall into a restless sleep.

Kalder and Lieres awaken the next day with blue hands, as though they had plopped their hands in a bucket of blue dye.

A nomadic group of mixed races, the Nomads keep to themselves mostly, trading with the Wagoneers and with Merchant Caravans that sometimes “seek them out”. They are generally peaceful and small groups have been known to visit different towns and cities for trading or visiting Temples or Shrines. They usually wear skins or cloth skirts/clouts and the women wear a halter and a girdle. Some of the Nomads (Leveled ones) have a tattoo of their tribal totem on their left pectoral/above their breast. Those with a Gift or Talent will have a tattoo across their face (it is required to identify yourself as a Sorcerer under Tribal law), under the eyes and over the bridge of the nose. The nomad tribes rarely use horses, preferring instead the Vorlup and Blurglup.

Day 9 (Sothos – the 9th of Zazel, tomorrow is the astrological First Day of Fall)  is a Recovery day, for shopping, resting, thinking. Herthrudr returns at dinner time.

The weather has broken, the sky is cloudy and it rains off and on all day.

Many thanks to Paths Peculiar for allowing me to modify and share his One-Page Dungeon. There is more to it, but we are not done yet…stay tuned!