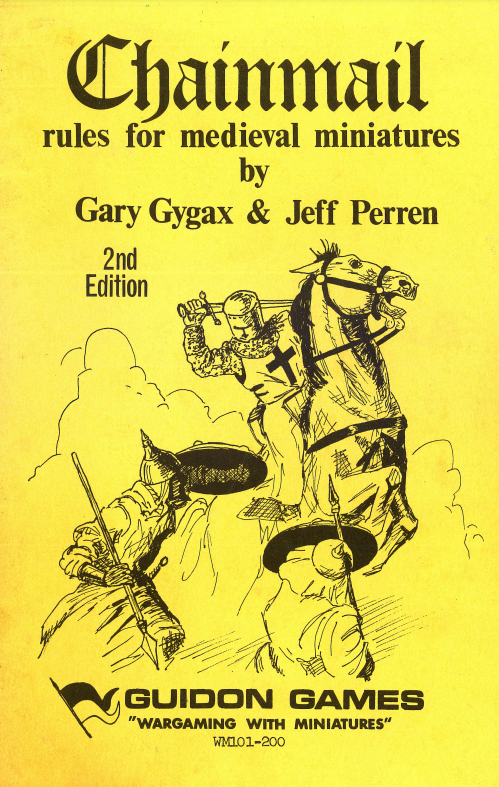 I am fascinated with the history of miniatures wargaming, and with fantasy roleplaying.

These two interests come together in Chainmail, the miniatures battles game that led directly to the creation of Dungeons & Dragons.

I put out a call for anyone interested in the game to drop me a line, answering a few questions about the game & their impressions. The first response was from J. J., who writes:

1. How did you discover/find out about Chainmail?

I first heard about Chainmail as a teenager when I was trying to decipher both the Holmes Basic Set and the AD&D books. It seemed like a really interesting historical document, not a real game, just like the OD&D booklets.

2. What made you want to learn how to play?

I started an AD&D “RAW” game about 2 years ago and we soon realized we would need to adjudicate a massive fight between the players and a tribe of lizard people, including siege weapons. We could​ have just rolled thousands of d20s and tracked HP, but I remembered the “Sword and Spells” supplement and decided to “AD&D”-ify it, and it worked out really well.

4. What scale minis do you use to play?

5. Do you incorporate Chainmail mass battles into your FRP Campaign?

Yeah, we sure do!

6. What do you like best about the Chainmail system?

Everything comes down to morale, just like in AD&D. I know that sound odd, but every big fight in AD&D breaks on one side just collapsing and trying to get out when the tide shifts. This seems to generate a lot of player interest in cracking the morale of the enemy, which leads them to try all kinds of odd ball tactics. And sometime they pull it off.

7. How would you compare Chainmail with other tabletop miniatures gaming rules?

Most other games try to “make sense” and don’t challenge you to try things in a odd way. Chainmail has it’s own logic, it’s own secrets that are worth trying to discover through play. I feel as if this is Gary & Co winking at me from the grave.

8. Does it inspire you to create your own “hack” or miniatures rule system?

Not really, I’m not really a game designer, unless I absolutely just have to create something I need “at the table”.

We have another response from Clerics Wear Ringmail, who volunteered to record a voice chat about it: