The Core Crewe is having breakfast at the residence of Master Ploon.

The Apprentice group, awakening in town with half the group carried off or gone off, decide to call upon Master Ploon (whom they had met on the dock just before shoving off on their adventure), for advice and guidance.

As you are coming down for breakfast one of the Grooms from the stable comes to Kalder and begs his attention.

The Groom wants to tell Kalder about his dog, out in the kennel. When you get out there, Kibble is very excited to see you!

He actually looks like a different dog, he is clean and sleek and obviously well-fed.

The Groom says he bathed Kibble early this morning, as when he arose and came out to the stable Kibble’s snouts were covered with blood.

The Groom says he thought Kibble had been in a fight, as he is a bit heavier than the other dogs. He tied Kibble up and went to look for the other dog. What he found was amazing, a pile of rats like you’ve never seen! That dog must have sniffed out every rat in the building, maybe up and down the street!

“You got a real good Tunnel Dog there, mister. Let me know if you want to sell’im. I can get you a real good price from some of the Delvers that pass thru here.”

A group of young people are ushered in by Butler, he introduces them as “The Apprentices” of Shavaligan. Ploon is quite agitated to see them, jumping up and asking “Where is Shavaligan?!” and, after a moment, “Where are the rest of you!?”

Razor, Flask of Brandy, backpack, Amulet of Protection from Insects

Feat: Delicate tasks. This percentage chance is used for disabling small mechanical traps like poisoned needles, and is also used for picking pockets, or doing surgery

on a wounded person. The skill is also used to detect whether a mechanism,

keyhole, or other small location contains a trap that can be removed.

Feat: Meditation I – Attain a trance-state in which a character’s body is able to Heal 1d4 HP

Feat: Moving silently. PC can move quietly, without being heard. As long as they are in light armor, non-metallic.

Staff, Holy Symbol, scroll with prayers (Hex of the Blessed Hand, Hex of Departure, Hex of Sacred Concentration) , Amulet of Protection from Fire

Feat: Charming – while trying to influence people or creatures you are able to adjust a reaction roll up or down one category

Feat: Light Step – you activate traps only when the Referee rolls 1 on a d6

Razor, Flask of Brandy, backpack, Amulet of Protection from Insects

Feat: Delicate tasks. This percentage chance is used for disabling small mechanical traps like poisoned needles, and is also used for picking pockets, or doing surgery on a wounded person. The skill is also used to detect whether a mechanism, keyhole, or other small location contains a trap that can be removed.

They tell the story. Baxagos & Gulovil were near death, taken by a giant creature who called itself Mudfoot. The other three (Kosas, Phalderanos and Shadoravan) went into the Nurdiyan’s grove and never came out…

Then Ploon tells his story, how the town guard are running all over town with the Gravewatcher, Xulixon Xhoon, looking for someone or something.

“My contacts,” he says, “tell me someone broke into one of the mausoleums last night, took some paintings and a large, round sculpture…”

The party was taken by surprise, as they had NOT actually removed the sphere…

Maisara gets very emotional about finding the mask taken from her uncle. Ploon gives them one more day to plumb the tunnels of Zenopus, and assigns some of the Apprentices to accompany the Crewe.

Oxardozius, Kulazan and the remaining Apprentices (Gonuxal and Irganos) are assigned to another task by Master Ploon. They leave the room with Ris Balthus, presumably to find the sphere.

The party packs their delving bags and head off to the Green Dragon Inn to collect Pagos, then out the gates toward the ruined tower. On the way, as they climb the small hill, they can see into the graveyard. There is a lot of activity, and armed guards around the mausoleum. Carefully they enter the ruins and lift the barricade, make their way down the stairs. The stairs are fairly clean, some leaves near the top, but swept-looking at the bottom. The party makes for the large burial chamber with the collapsed wall.

Entering the room is utterly quiet, the smell of fresh earth. Kalder leads the group over to the sarcophagi, intent on helping Maisara find the mask she believes in down in these tunnels. Four of them push the top off the first sarcophagus they come to, and a puff of noxious-smelling gas billows forth. Vile as it is, only Roinseach gets ill, vomits and passes out. Shazorival moves quickly to her side, she is still breathing, just seemingly overcome by the fumes.

Within the sarcophagus is a canvas-wrapped body, it crumbles to pieces when touched. A horrible reek issues from within.

For the next couple of sarcophagi the crewe uses spears to lever up and push over the lids of the sarcophagi. None seem to be filled with the noxious gas. They do result in the “collection” of some jewelry pieces, made of gold and silver and crusted with tiny gems. High Quality and high class.

Opening the fifth sarcophagus (the one with the defaced Hex of Departure that they had re-painted last time), released an animated skeleton! Aziagos ducked just in time to miss being sliced by the scimitar the dead man was holding. A short melee ensued, ending with Aziagos smashing the skeleton to pieces with his mace!

Aziagos started to search around the sarcophagus for the fallen skull, he found a silver necklace. He picked up the dead man’s fallen scimitar and Kibble started to act very agitated. The dog ran to the rubble-wall and started digging like crazy. Suddenly a handful of slinky Grave Rats burst forth, Kibble grabbed one and received a bite for his trouble. As more of the horrific creatures emerged from the rubble, Kibble started grabbing and shaking them! 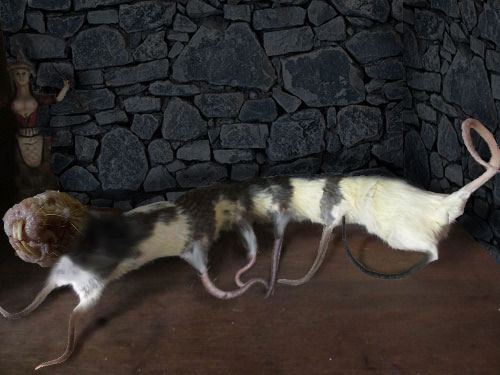 The party was then able to retrieve the skull of the undead skeleton, revealing a lump of coal shaped in a precise octahedron. Arnbjorg was able to remove the coal with out breaking the crystal or the coal. Not sure what to do with it, she slipped it in her pocket.

Opening the final sarcophagus was anticlamactic, the lid slid to the floor and shattered like the rest. Inside was another un-wrapped skeleton, dressed in a chain mail hauberk, holding a long sword against its chest. The skeleton, the sword, everything in the sarcophagus was covered in dusty cobwebs, obscuring the colors of the dead man’s tabard, turning everything a dusty grey.

Roinseach stuck her halberd into the sarcophagus to hook the chain mail tunic, and pulled it free. The skeleton’s legs and skull fell free, clattering to the bottom, atop the sword’s scabbard.

Kalder took the sword, wiped off the webbing. It was finely forged and oddly light for such a weapon, but perfectly balanced. Maisara lit another torch from the guttering flames of her first, while Shazorival tended to the wounded Apprentice Barber/Surgeon and the Saringa girl who had been badly bitten on the calf.

Aziagos supplied them with a bracing shot of whiskey, while the Barber/Surgeons debated whether to take the time to brew an infusion of Tibane.

the herb Tibane: Healing is accomplished in the World of Weirth by the non-magical folk using a poultice made from an herb called Tibane. It takes 3 turns to brew the infusion and soak the material of the poultice. Tying this poultice on over a wound will heal 1d3 HP. This poultice will only be effective on a person once every 24 hours. It also has the effect of speeding up the recipient’s heartbeat, giving them extra energy. This effect will reduce Fatigue by one level for 6 hours, after which the Fatigue level will increase by one level.

5 rings, a coronet, a scapular, a necklace

a Scimitar, a Longsword (both illegal for any party members to carry in public)

an octohedral “crystal” lump of coal