This is where the Player’s resources will be gathered, in pages and in links to Blog posts.

This campaign is (hopefully) not going to be cookie cutter. I am looking to push the Pulp angle to the fore, with elements of Gothic and Eldritch horror. I do not want this setting to look and feel like the “standard medieval England with some monsters and people in funny suits”. 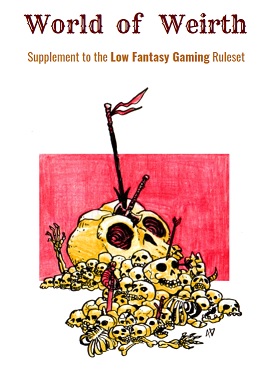 Check out Appendix N on the blog, if you haven’t already. Two pieces are, to me, most essential to understanding the atmosphere of the setting. Fred Saberhagen’s Empire of the East, a collection of three short novels of a post-post-apocalyptic future; and Conan the Barbarian, the 1983 film, are the best examples of what I am trying to convey in this setting.

Yes, both of those titles are campy and a little cheesy and dated, BUT, they tell a great story and have outstanding descriptions and visuals of both characters and their environments.

For the inhabitants of the World of Weirth it is a dark and dangerous time. New lands claw for survival in the ruins of old Empires and magic is a mostly forgotten art. The land and the settlements of the starting campaign area look more like Greece and southern France than the more traditional settings of England, Germany and northern Europe.

Keep in mind the setting is a dangerous place.

Other details that may help set the scene:

A short video clip from Sinbad and the Eye of the Tiger:

Here are a few pictures to help set the scene, from landscapes and the Conan movie(s):

You can see the Character Creation guide here.