The World of Weirth is a setting much like a Hyborian Age, with danger at every turn, Swords & Sorcery magic, demons and mad prophets.
Tribes Of Mipokop and Nomads roam the savanna, while peasants and hedge wizards hide behind the walls of even the meanest thorp. A powerful Ley Line crosses the land, creating transient Gateways to the Faerie Realm.

The saga of the Blood Red Moon continues… 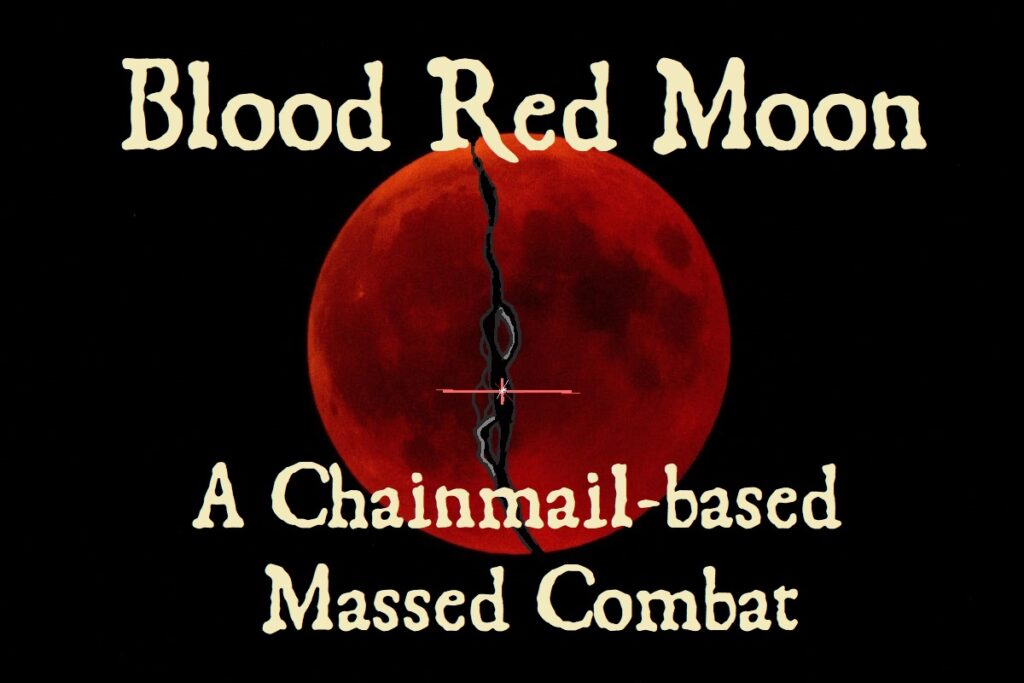 There is the sound of thunder, a mighty crash! The floor lurches beneath your feet. The glow-globes hanging from the ceiling sway back-and-forth, and blocks fall from the wall behind the toppled bookcase. There is a darkened space beyond, the hole is just large enough for a person to crawl through.

The door at the far end of the entry hall opens with a BANG! and a female voice calls out, “Lord Rook! Are you in there?” – there is a brief pause – “Come out now and follow me if you want to live!”

From the direction of the door, you can hear shouts and screams of terror and pain, the clash of battle.

What do you want to do?

Rook looks down the hall, the small brunette in the red dress calls him “cousin”, as though she were his social equal and known to him. Her hair is tied back with a scarf that matches her dress, indicating her status as a married woman.

Alda believes she recognizes this woman,

*When you go down the hall and meet up with the woman in the red dress, Alda thinks she recognizes her as a woman she has seen at the Raven shrine, a petty noblewoman and wife of a Merchant House Lord.  Amilae, or Emirae is her name, you think.*

The party decides to follow Arimae to safety. Roinseach tears a glow-globe down from the ceiling with her pole arm, it falls to her arms and she discovers it is much heavier than she anticipated!

Arimae leads them down a hall, around a corner, and into a chamber that looks like a richly-appointed meeting room. She pulls on two sconces and a secret door opens in the stone wall. She has two of her guards lead the way, with shields and spears, and the party enters the secret passage.

After a short distance it begins to descend. The stairs go down and down in a large circular spiral. After several minutes they reach a landing, where there is a small, round chamber. On the opposite side there are two passages exiting. Both lead down, and she cannot decide which to take. She pulls a flower-like pendant on a golden chain from her bodice and holds it up. It glows with a gentle pink light, unchanged at each of the passages. Finnean takes a look, and smells, then decides on the right-hand passage.

This stair leads down and down eventually ending in an opening, which turns out to be a very large chamber, some 100’ in diameter. Through stealthy peeking, Finnean sees there are about a dozen of the Water Cultists down here, busily erecting some kind of wooden altar. In the center of the chamber is a large dais that once held a large black-stone statue. This statue has toppled over and shattered upon the floor. 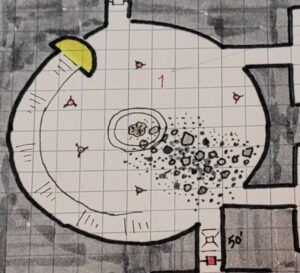 There is a long period of discussion on how to best attack this obstacle. Finally they hit upon the idea of tossing a lantern full of oil down on the altar, followed by torches, then a bum-rush down the stairs, with Rook in the lead, wearing the Darkhelm.

Rook is able to run around the chamber, deep inside a hemisphere of darkness, catching cultists in the dark and killing them. The rest of the party move onto the stairs and begin firing missile weapons and throwing more torches to ignite the altar and the cultists nearby who were splashed with oil.

A priestess of the water cult appears and casts a spell of paralysis upon Finnean at the bottom of the stairs, and the party take several shots at her. She is struck by at least two arrows and flees back down the hallway.

She is quickly replaced by three large Skarn, who start throwing javelins at the party members on or near the stairs. Roinseach and a group of the guards engage them, tying them into close combat. In the darkness of the Darkhelm, the Skarn are defeated. The rest of the cultists flee the chamber as the battle with the Skarn rages. After things are done, Alda moves about the room, preparing the Ritual of Departure.

The Way is Blocked

When everyone is patched up and ready to go, they follow the blood trail of the wounded magic-user through the passages and find a locked door. Rook picks the lock, but fails to notice a trip-lever inside. A pit opens below him, but he manages to dive to safety!

The group decides to go around this obstacle, if possible. They enter a large chamber off of the main room.

The floor is covered by row after row of giant copses wrapped in silken cloth. The wrappings are deteriorating badly, revealing the elongated skulls of the dead creatures beneath. The floor around the corpses is littered with the desiccated carapaces of golden scarabs. In the corner of the room is a door, which leads to what looks like a meditation chamber. There is a large bureau against the wall, with drawers in the front and two large golden candlesticks on top. They take the candlesticks (weighing in at 5 pounds each! 1,000 SP just by weight) and find dry-rotted robes in the drawers.

The exit to the room is another locked door, which is also trapped with a poisoned needle. Rook uses his weapon to smash the lock and Finnean forces the door. They follow the corridor south and around a hairpin turn. The floor here is sandy, but the walls and ceiling remain the creamy, white Alfenstone. The corridor leads north for quite a while. After about 35 paces they come to a bare spot on the floor. Finnean has been probing with his 10’ pole this whole way, so he uses it to rap on the bare stone. The section of floor rises up in a fluid motion and, like an enormous carpet, rears back then lunges forward to envelope the lead party members. Finnean fends it off for a couple of rounds before it overmatches him and then drops down to cover Roinseach, Rook and Finnean, who are immediately rolled up and begin to be crushed! Roinseach has a chance to use her blade on the creature, then her claws. The rest of the party push forward past Arimae’s guards to attack the creature. Meanwhile the guards form a shieldwall and retreat in good order. The party members are able to cause enough damage for the creature to release the three trapped humans and then kill it.

Rook is angry about the retreat of the guardsmen, and insists they move ahead of the group.

They move another 30-40 paces down the corridor and find a door. It is unlocked and upon entering see it illuminated by soft blu-ish lights. The room is dominated by a 14-foot long table and six tall, high backed chairs (they look as though they are proportioned for a person some eight feet tall!). The far wall is carved with niches, each holding a skull.

There are 3 human skulls, a jackal-headed Mipokop skull, a horned bull skull, a long-faced humanoid skull that Finnean suspects is that of a centaur, a large snake skull, a large and distorted human-shaped skull and finally an odd, dog-like skull with long incisors on top and bottom jaws.

Arimae steps forward, holding her pendant forth once more. It glows with a pale, pink light. She smiles broadly and grasps the bull skull. She turns to the group and they can see her pleasure in the find. She puts the bull skull in a bag, then adds the snake skull and the centauri one.

Finnean grabs the large human-shaped skull and the odd one with the teeth. Alda grabs one of the Human skulls and puts it in her bag.

They turn and go back the way they came, as it has occurred to Arimae that they can use this large table as a bridge over the pit.

They return  to the chamber, cross the pit, and enter the room. It smells of scat and BO. There are a half-dozen sleeping pallets of shaggy, furry skin (like a llama’s). They find nothing useful in this room and continue to follow the blood trail into another stairwell. This goes down quite a ways, ending in a sort of jetty in a grotto, with an underground river passing by. The guards start loading their gear into the flat-bottomed boats tied to the jetty.

Alda tries to discern just what is going on with Arimae, using her *Detect Magic* ability upon her. Strangely, Arimae seems to not really register at all. Alda suddenly grabs for the chain holding Arimae’s pendant! She gives a yelp and lets go, while Arimae glares daggers at Alda. 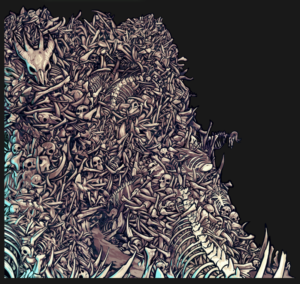 Arimae says, coldly, “Beware of touching things that are not yours.”

The group boards the boats and pushes off downstream, riding with the sluggish current. After a quarter of an hour or so, they see an opening on the left, a kind of plaza with ruined buildings in a high-ceilinged cavern. Immediately around a sharp bend in the river they see another cavern opening, this one guarded by a 40 foot tall square tower made entirely of bones!

Excitedly Arimae tells the guards to pole toward the shore. They beach the flatboats and leap ashore. Half of the guards take up defensive positions and the others pull the boats out of the water. 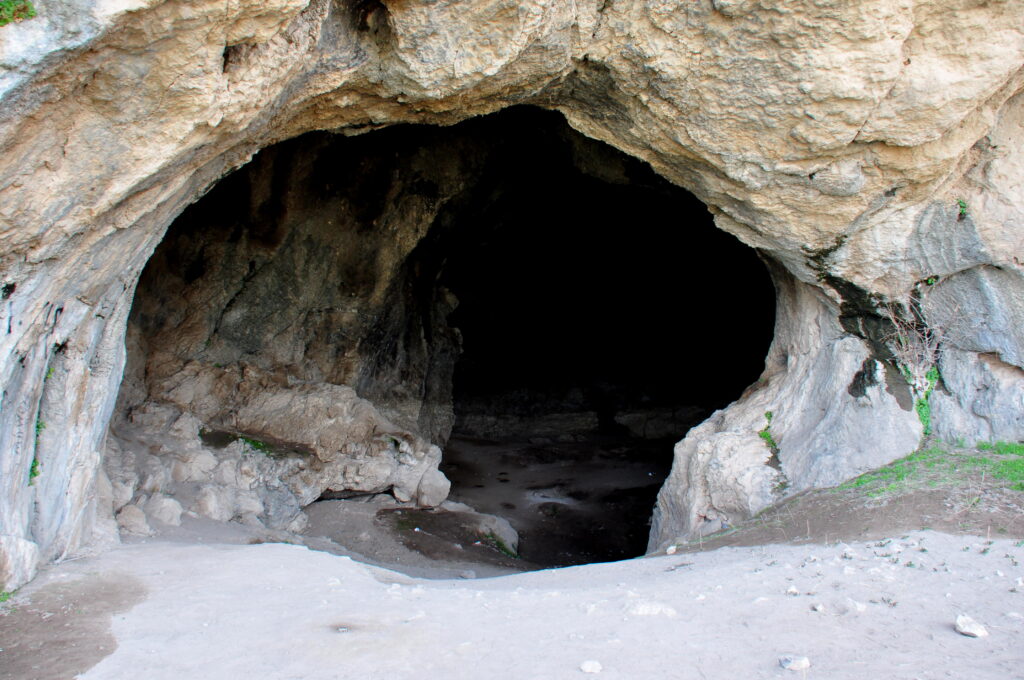