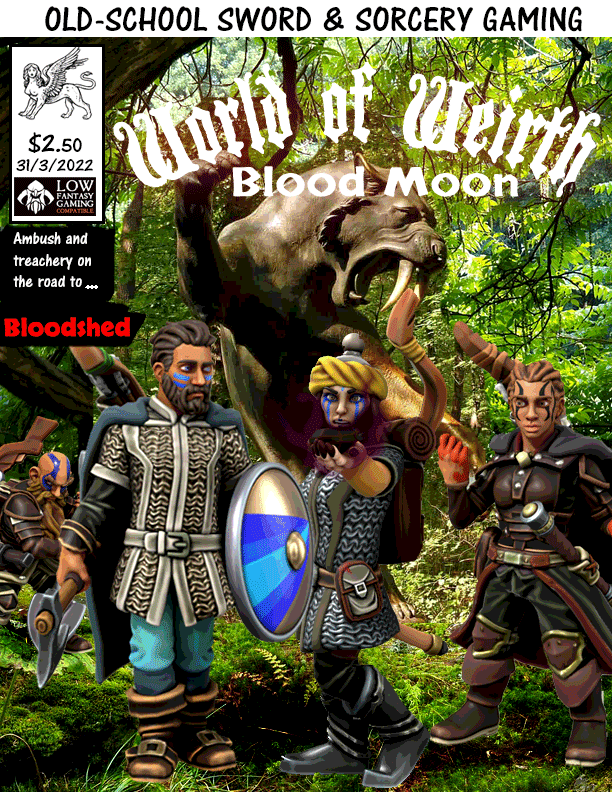 Meanwhile, on the 14th, the day of the Abundance Solstice, The Nurdiyan of the Grove had rallied the people of Nulub’s Quarry to gather firewood and build a great bonfire in the Farmer’s Market. As dusk fell the great fire was lit and many songs and chants were performed. Groups of people were assigned to continue the singing and feeding of the fire until the Blood Red Moon should be healed.

Late in the day Roinseach reappears in town! She asks around and is directed to the Lord’s Manor, where she reunites with the group. She spends some time bringing them (at least partially) up to date on what happened to her.

Darozin the Priest (of the Church of Starry Wisdom) offers a *Healing Draught* to Linos, in apology for the unbelievable actions of his acolyte. Linos initially declines, but then accepts, provided he can have Alda investigate it first. The two of them perform some “tests” and determine it is good. Linos drinks it and soon it begins to take effect.

The Vepitor lodge in Gaztelu Mugatik were less impressed with Rook’s nobility, as they served a Baron of County Vorxiya (I rolled a 4 on the Reaction Table). They composed a reply over the course of the next two days and sent it back on the 17th .

An officer of the Sheriff was to accompany the messenger, as the officer was to commandeer a squad of troops from Nulub’s Quarry and bring the Company to Gaztelu Mugatik to register and pay their fees and fines.

The text of the letter from the Vepitor in Gaztelu Mugatik, which arrives at the beginning of second watch (10am) on the 17th:

To his respected Lord, Rook of Laralla, this Trailblazer speaking for Vepitor Captain Ousigasos sends greetings. The Captain of this Lodge is even now under arms in search of a lost Patrol, gone some 5 days now. I am sure you understand these self-same Skarn have been seen in the Mugatik for some time and are hunted mercilessly.

If your Pathfinder companion is discovered, she will be rescued as is due the status of her position. I must needs inform you that I have spoken with the Steward of the Lord Baron Castellan, and I am commanded to confer that your Company is not listed among those Chartered in the Mugatik. This must be rectified at once, the fees and penalties paid.

Accordingly, an officer of the Sheriff accompanies the bearer of this missive, with authority granted by same, to gather a troop to escort your Company to the Gaztelu for the remittance of fees and fines. I trust you will act with the Honor and the Trust of your House. The Steward looks forward to your arrival, soonest.

Til next we gather beneath the boughs.

The messenger, one Zabagios, arrives at the Manor with a group of 12 Cavalry from Nulub’s Quarry, in addition to the Sheriff’s officer from Gaztelu, Stosarakos.

Zabagios gives the message to Linos, who has come out to greet them in Rook’s name. Linos brings it in to Rook, who reads it and gets visibly flustered.

Rook and the group go out into the yard to discuss this summons with the Officer Stosarakos. He is very polite and informs them he is to wait until they can gather their personal effects and return to Gaztelu with him. This afternoon.

Rook is beside himself with frustration at this “tax grab”.

The cavalry dismount and form a group, waiting in the yard for the Party.

After a few minutes of heated debate, the group exits the manor and the entire group travel to Gaztelu. Rook tells Linos that things may get out of hand, and if so, Rook will use a code word (“Shovel”) for Linos to attack by surprise.

They arrive at Gaztelu and are led through the town to the Keep, on the north side, next to the Witch’s Tower. It appears to be market day, in spite of the Blood Red Moon. Once in the Keep, the PCs are escorted to the chambers of the Steward, who welcomes them graciously. *The rest of the group are left to wait in the courtyard.*

Rook presents a receipt from the gate at Nulub’s Quarry, as proof that the monies in question were fairly obtained and that taxes were paid. He insinuates that any delinquencies are on the part of Lord Dru’un.

The Steward is bemused at what he sees as a transparent attempt to evade the question at hand. He carefully explains that the group constitutes an Adventuring Company, and as such, must pay a license fee of 500 SP plus 100 SP per full member and 10 SP for each man-under-arms.

Rook is incensed and retorts that they are merely travelers going from place to place, selling the odds and ends that they find. The Steward responds to this with, “Ah, so you are a Merchant Company! Very good. In that case the annual fee is 1,000 SP, for a license to trade within the boundaries of Vorxiya.”

Rook is at the end of his patience and refuses to pay. The Steward insists that they *will indeed* pay or become guests of the Castellan until this matter is resolved.

Linos whips out a dagger and throws it at the Steward! It pierces his shoulder, and he staggers back. The two guards at the door spring into action, the clerk in the corner dives for the bell-rope!

One guard bolts from the room, likely to go for help, the other readies his spear, but Roinseach is too fast for him and grabs the spear with one hand and puts the Ebon Blade at his throat.

The rest of the party reacts with blinding speed. The guard running for help is shot down with an arrow, and Finnean runs down the hall to grab him and pull him back into the room. Alerted by the bell, guards poke their heads out of the doors in the hallway, then poke spears at Finnean. He takes out two of them, before retreating to the Steward’s chamber once more.

In the meantime, Roinseach has put on the Helm of Dark Shadows, readied her halberd, and strides down the hall to confront the guards in darkness. There are a few rounds of struggle in the dark, Roinseach manages to take out another guard, before they are able to retreat and then loose a trio of dogs into the hall. Roinseach retreats into the Steward’s chamber, removes the Helm’, and the party fights and kills the dogs, also tossing a bundle of oil and burning rags down the hall. Burning oil blocks the end of the hall!

Believing they are locked in now; they begin to search and ransack the room for loot or an exit. They take a Silver Holy Symbol from the Steward, worth about 150 SP, and a key. They cut the bell rope, and overturned the two bookcases, revealing only dusty walls.

The Hand of Fate

Alda spends a Fate point to create a “Lucky Break” that will get the party out of a jam. The player provided me with two options. I like both, and since the Siege was coming up next, chose to let events play out before I decided.

The Siege of Gaztelu Mugatik is currently running as a massed combat on my home game table. It is the culmination of almost a year’s worth of behind-the-scenes play with some Patrons and suggestions from friends. You can watch the videos of the Siege play-through here:

LFG Playtest Campaign 1 - The Shadow of Evil Chaos is an experiment with a new (to me) game system, Low Fantasy Gaming, and a new magic hack designed to bring the atmosphere of danger from the pulp novels of Swords & Sorcery. We are playing fully online over a Discord Voice server, using some home-brew maps, art and characters designed on the HeroForge 3D printing site.
Follow all of the posts here: LFG Playtest Campaign 1.
Post Views: 87
Share
Facebook Twitter Pinterest Linkedin