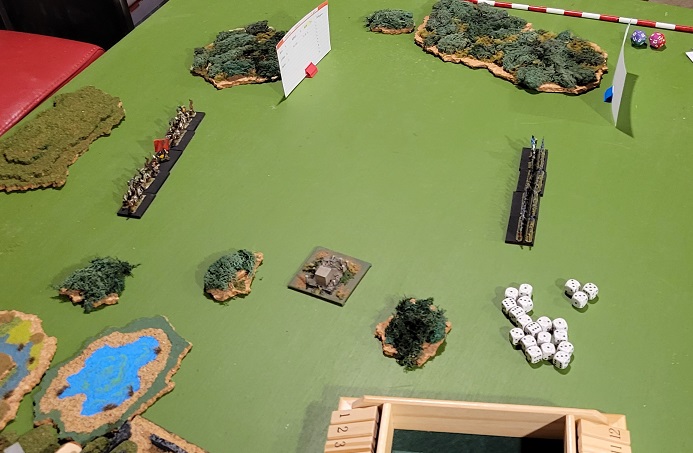 Well, I certainly learned some things from this mini battle. The first two playtest games indicated that Chainmail looks like a battle of maneuvers, and this one clinched it. I added a Hero to the mix, and it didn’t have the unbalancing effect I thought it would. I made a mistake in the Missile rules, which would have had an effect on the outcome, but in an interesting way. I use the Pass-thru Shooting rules for the Heavy Foot, instead of the Short-range rules. I based the decisions to charge on this, in that the Pass-thru rule applies at the 1/2-move point, and if a Charging unit was less than 1/2 move away from their target, the target would not be able to fire their missile weapons. 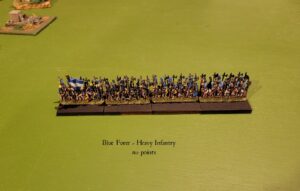 On the contrary, those units with short range missile weapons can always fire at Charging units, and thus inflict casualties prior to the start of melee. This is a very important consideration when deciding when to charge an enemy unit in the front. As I mentioned, it is a game of maneuver, thus two units of evenly-matched ability will need to rely upon positioning and flank attacking to gain the advantage. When the unit is 40-strong adding a Hero does not make a significant difference in a face-to-face battle.

The second lesson is, for a Solo Wargaming session, you need to assign a level of aggression to your troops/leaders, to make decisions about charging or not a bit easier. William Silvester’s The Solo Wargaming Guide assigns a Commander Competency Rating (CCR) to the leader of each force. There is an interesting table on p89 that gives a method of randomizing what will happen to a unit that loses their commander in battle, based on the leader’s CCR.

In Chainmail the only Commander rule (2e, p18) deals with rallying troops who have lost a combat/morale check, adding 1 pip to each die rolled by a unit the commander has joined, or is within 12″. This is a powerful rule. Units within range of the army commander become 16% more effective in melee!

I propose a House Rule for Solo Wargaming – the Chainmail Commander Rating. It will take some testing, but I believe that it could be very effective, and fun, to apply to each unit, as well as the overall Army Commander. Units within 12″ of the Army Commander would use his CCR, those further away would use the CCR of their organic unit commander. For Solo Wargaming it might even be interesting to vary the Command radius of the Army Commander, based on his level of competency. 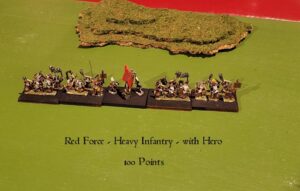 This is a sample list for the effects of CCR on a unit:

These are just options, and I’d certainly like to solicit your opinions and ideas on this.

You can watch the video here (Chainmail Battles Episode 3), and please consider leaving a Comment.