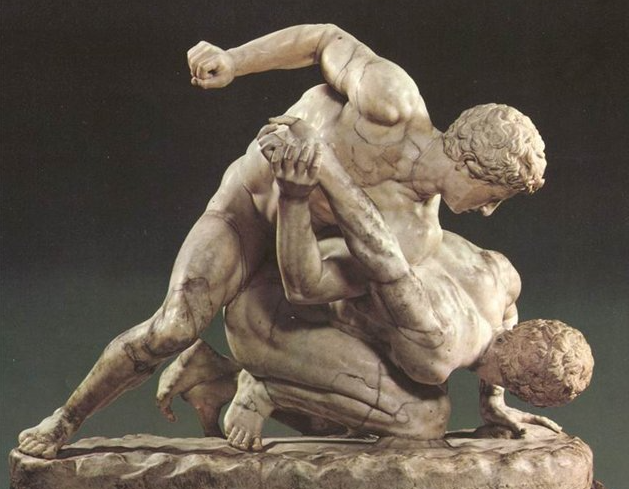 I’ve watched a couple of videos recently, both dealing with the Unarmed and Non-Lethal Combat rules in D&D, etc.
The topic also came up at my table, where a PC in a recent session wanted to grapple with an NPC. I was unaware of any Unarmed Combat rules for LFG, so I grabbed the AD&D DMG and turned to page 72.

The AD&D unarmed combat rules are a bit complex, with a multitude of variables. It also relies on a set of d% tables rather than d20. It takes a little bit to get through the lists of modifiers.

Well, I decided that while the results were cool, and had some narrative flair, there might be an easier way to get there. Something more along the lines of a To Hit roll, then a Damage roll.

I suppose I’ll be burned at the stake for this, but I’m not playing AD&D or LFG, strictly speaking, so please bear with me.

The amount of non-lethal damage your PC can withstand before losing consciousness (notwithstanding a lucky Knock Out punch) is equal to their HP. All Fighting Man classes (in the World of WeirthTM) can add their experience level to this total.

Strength is important in unarmed combat, and your PC’s STR score is an indication of relative size and burliness. A PC may be able to ignore the first one or two non-lethal hits they take, as indicated by their STR Bonus. Also, the PC’s STR Bonus will be applied to any To Hit roll for Pummeling, Grappling or Overbearing.

Any To Hit roll for Pummeling, Grappling or Overbearing that scores a Natural 19 results in an immediate check for a surprise KO, with a 5% chance of success. If it is a Pummeling Attack, the Attacker rolls d6+2 for Effect, and gets to strike again.

Pummeling just means hitting the other guy with your fist (or foot, I suppose). FRP combat is already abstracted into HP (that’s a discussion for another time!) and semi-narrative Combat Rounds, so why not abstract the Unarmed Combat Rules a little bit?

If the Attacker has a successful To Hit roll, they will then roll a d6 to determine the Effect.

These damage figures are taken straight out of the 1e DMG. 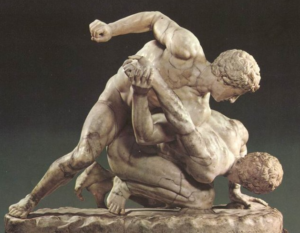 When Grappling, a PC is attempting to get a grip on their opponent, leading to a limb-lock or head-lock, possibly dragging them to the ground in the process.

The Defender will also roll a d6, modified by their DEX bonus.

Compare the two rolls according to the following chart, Attacker result on the left column, Defender result in the top row.

Reference the letter result on the following table:

On the 2nd and any subsequent round, apply the Lock Attack Modifier to the d6 roll for effect, in addition to any other modifiers.

Once a Grapple has succeeded the Defender may attempt to break the Lock with a HARD STR or DEX to escape. A result of a Natural 1 on this Break check gives the Defender a chance to immediately attack the grappler.

Overbearing is essentially just trying to bum-rush and knock the other person over.

It will work very much like Grappling, with an opposed roll of a d6, modified as follows:

Consult the Grappling and Overbearing Chart, above:

Move down one line if the Defender is already Grappled

There we go. Pretty simple to execute, with enough detail in the results to create a workable narrative. And with proper formatting it will all fit on one page for your GM Screen

This is version one, we’ll be playtesting it this week. Feel free to borrow it and run it for yourself, I’d love to hear your results!