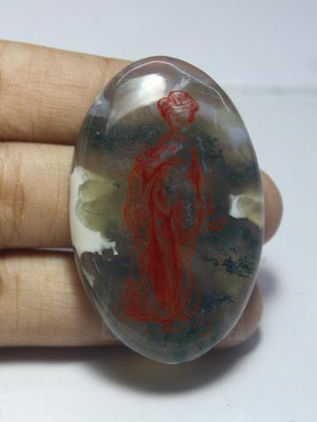 10-26 Hielik Travel with a caravan to Laralasbol to return the armor of a Noble’s dead daughter, that she had found during her adventures in the Marsh of the Half-Dragons, waaay back in Episode 6.

16-21 Hielik Travel to the Blasted Heath, in an effort to “heal” Kalder’s hand

On the night of the 19th, on the Midnight watch, an apparition appeared to Kosas, who awoke Lieres to help him see what was going on. The ghostly woman, dressed in very old-fashioned clothing, led them over 100 yards from the camp, into the darkness. She pointed to the ground, but the 2 were not into going over there in the dark. They stuck arrows in the ground to mark the spot.

In the morning they returned and dug in that spot, finding a ruby-hilted dagger with a very short blade, wrapped in the tatters of a silken garment. Kalder performs a Ritual of Departure for the apparition, and they move on.

Mid-morning on the 21st they encounter two dust devils, blowing dust and grit and bits of plants around in matching vortices. The mini-tornadoes move off to the northwest.

Early in the afternoon on the 21st they come upon a wooden pole in the ground, with a twisted signpost reading “Fenmor Barrow 2 mi”. The wind has picked up here, too, blowing sand and grit in their faces. Beyond the signpost is a pale smudge, hidden in a heat-shimmer, with the darkness of the Blasted Heath on the horizon. The party chooses to go (left) north around the heat shimmer, and approach the Blasted Heath from the northwest.

They find the spot where the party left the Heath last week, the trapdoor to the tomb still standing open.

Directing the Porters and guards to begin making camp, the party crossed the crumbling ground and re-entered the tomb. All seemed just as they had left it, no change to the quartz altar. In the treasure room they discovered the coins that had been spilled on the ground were covered with lead oxide crystals, and a brief investigation showed the coins were all plated fakes.

On the landing outside they found two large, palm-sized serpent scales and a smell of urea. Shavanoxil went back up to get the guards and porters, brought them back down. As she exited the tomb she could see the guards dispatching a group of jackals. She momentarily considered how odd it was that jackals would attack in the daylight like this, but quickly put it out of here mind as she gathered the men (and woman) to return to the treasures below.

The porters started loading up the lead coins while Lieres investigated the locked stone door across the hall.

Inside was a small room with a large black pillar, studded with gems! Each wall had an alcove with a skeleton in rotten kit holding a rusting two-handed sword.

Aziagos investigated one, decapitated it, and looked within the skull, discovering a polished cameo in its left eye socket.

Struck with an inspiration and reminded of a “gemstone” that Arnbjorg found in an animated skeleton under the Tower of Zenopus, he repeated the process with the other two armored skeletons and found a one-inch diameter purple stone sphere in the left eye sockets of these two others.

They carefully wrapped the three stones in a scrap of cloth, tied them into a leather bundle, and Aziagos stored them in the top of his backpack.

Lieres then began to chip away at the stones upon the pillar.

For a few moments the three stones in Aziagos’ pack buzzed like hornets! The three armored skeletons crashed to the ground in pieces.

When the porters were done scooping up the lead coins in the first room, Lieres put them to work chipping the gems off of the column in this room.

Suddenly the guards on the landing at the top of the stairs let out a shriek!

Running to investigate, the party saw an enormous serpent making its way up the stairs toward them, its tail switching back and forth, knocking battered shields from the wall. Through a sequence of great rolls by the guards and our heroes, the snake was quickly dispatched, arrows in its eyes from direct hits preventing it from striking any of the party members.

At the bottom of the stairs was the lowest landing, across the way another stair led up into darkness. Scattered on the floor among the traces of yellow powder were 6 large, dead birds, like turkeys, with black plumage that seemed to shift colors to blue and purple in the flickering torchlight.

The party bypassed the dead birds and made their way up a looong stair to a large octagonal room. The stair entered the chamber in the center of the floor.

Each wall of the room had a door in the center of it, carved with a stylized Wyvern shape, overlaid with the High Telantean rune for “F”.

“Fenmor” shouted Lieres! Between each of the doors hung a shield and a long strip of cloth, like a narrow, embroidered tapestry, now covered by black stains and mold of centuries.

Lieres moved to one of the doors and discovered there were no locks, so he opened it. Inside a small chamber with a stone sarcophagus, a wooden bookshelf with many toys and curiosities, plus a hobby “horse” made in the shape of a lizard and a 3’ diameter wooden circle leaning against the wall.

Lieres picked up the hobby horse to examine the lizard head, and as he did so the spectral form of a young girl rose up from the sarcophagus. She shrieked something at the party, Aziagos fired a silver-tipped arrow (to seemingly no effect) and the ghostly little girl pounced on the guard, Spadakos!

Wailing at an incredible volume, she drove her hands right into Spadakos’ chest, he crumpled to the ground, and the two of them vanished in a puff of brimstone. Stunned and shaken, the party cast about in shock, calling his name to no avail.

The Spirit of Lady Fenmor 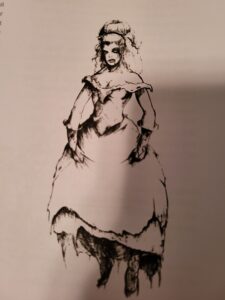 They entered another of the chambers, to find a similar setup with the sarcophagus in the center surrounded by shelves and stacks of trinkets and valuables. Moving straight to the sarcophagus, Lieres pries it off and reveals the skeleton of a woman dressed in fine, old-fashioned clothes. She wears a jeweled, golden scapular and a golden ring on each forefinger, her hands crossed upon her breast.

Lieres reaches for the scapular and the woman’s ghostly form rises from the corpse, circling about the room. Aziagos readied another silver arrow, but the spirit seemed to be in a mood for parley. She told them that the party could set her family free if only they would go to her husband’s chamber and smash the ward that bound them here.

There was some back-and-forth, deciding to possibly threaten her by taking the rings from the fingers of her skeleton. She laughed and said go ahead, just go find her husband and smash the urn! Pointing at Kalder she singled him out as being able to do it.

The party went across the chamber to the vault she indicated, opened it, and were confronted by the spectre of Lord Fenmor himself. Again, much pointless parley, while Lord Fenmor’s shade insisted the party destroy the Bands of Exxor (or whatever).

Aziagos tried to smash the rings against the floor with his mace, it shattered like glass into a thousand fragments. The spirit mocked Kalder, who tried to crush the rings with his spectral hand, to no avail.

Finally (for the love of God and all that is holy) it occurred to Kosas to try to cut the rings with his Fae Knife. Sweet mercy! That did it! Once sundered there was a great scream from the chamber of Lady Fenmor, and a blinding light, then a crashing sound, as the very stones of the tomb began to move and shatter into gravel. Within seconds the wall of the tomb was undulating like waves on water, and the destruction was continuing around the chamber!

Kalder stared at his hand, as it slowly returned to reality, no longer transparent and ghostly.

Kosas scooped up the severed parts of the rings and the party fled down the stairs, while an enormous grinding noise continued behind them. They raced up the stairs and hustled the porters out, who had finished removing the gems from the pillar and were carrying bags of lead coins out of the tomb.

They were able to make it across the undulating, crumbly surface of the Blasted Heath and to the camp. As it was getting dark and the Drovers had prepared a meal, the group decided to bed down here for the night.

We are transitioning this campaign to 1:1 “Jeffrogaxian” time, which is to say that one game day equals one day in the real world. Thus, when it is June 10th here on Earth, it is 15 Hielik on Weirth. Seven days later, when we get together to play again, the date will be June 17th, and 22 Hielik on Weirth.

Because the party is traveling, time passes for them in the game, moving them into the future IRL.  At the end of the session it is evening of 21 Hielik, and the party is at their camp in the wilderness. At the beginning of our next session we will “catch up with” the party in time, and they will arise on 22 Hielik, ready to adventure.

If the party had elected to return to Zan’s Forge, six days away, we would have played that trip back, six days long, with random encounters and everything else. The campaign date would then have been 28 Hielik upon their return. Since the 1:1 passage of time is in effect, that means it will still be 22 Hielik when we all return to the table, but the party will be “in the future” at 28 Hielik. This means we would have to use some different characters for an adventure on this date.