After the battle with the Grave Rats the party moved on to the chamber just past the (Darkling) lair. Here they set a watch on each door and brewed the Tibane for healing. Oxardozius heard a muffled scream thru the door to the lair. While disconcerting they decided to ignore it and carry on with the healing process. Once everyone was bandaged they went through the south door into the mushroom chamber. It seemed to be pretty much unchanged. Adora collected a single dinner-plate sized mushroom cap, then led the way to the concealed hatch in the floor. Oxardozius made a sling for Kibble while the rest of the party started making their way down the tunnel. Not quite vertical, it was studded with metal and wooden handholds and “rungs”. It was very easy to climb as the passage seemed to be excavated from a layer of tightly-packed rubble – earth, various stones, and blocks of the white stone.

At the bottom of the tunnel they found a large, rounded chamber, filled with mushrooms and fungal growths. The walls were covered and the ceiling was draped with strange-looking hanging “vines”. There was a susurrus of noise, like wind through trees or the sound of  far-off river rapids. The room smelled of mushrooms and earth. Exploring they found a passage to the south and in the center of the room a fissure or crevasse, filled with the hanging vines. As they approached the fissure they heard a very low-pitched droning noise.

From the darkness to the north came a walking mushroom-creature, with glowing purple eyes and enormous, long “arms” descending from the cap of the mushroom. It was about 7 or 8 feet tall and moved through the field of mushrooms with ease. The crewe decided to remain motionless and see what would happen, as the creature approached Oxardozius it swept him aside with its long arm and sent him flying across the room!

Battle ensued, and two more of these creatures moved into the circle of light. The crewe swarmed the two closest creatures, knocking one to the ground and the other into the crevasse. Aziagos made a plea to his god and was able to shoot an arrow directly into the eye of the third, it too toppled over the edge of the crevasse!

The two mushroom men that fell into the hole appeared to have gotten tangled in the hanging vines below.

Looking over the edge, Kalder could hear the sound of rushing water. The party left this chamber thru a narrow, natural-looking passage to the NW.

The passage twisted and turned, leading to a split in the stone, where thousands of tiny centipedes swarmed on the wall. The party went north. They passed by a small chamber, Shazorival pokes her head in to see a burned-out torch lying on the floor next to a very high-quality, single-edged knife with peculiar markings. Arnbjorg identifies them as related to the Cult of Pkutbay. Shazorival sticks the knife in her belt.

Another split in the passage – this time they went West, where the cave ended at the edge of another, larger crevasse. The sound of water was much louder here, and there was a purple glow down below, illuminating the roiling surface of the underground river. It was flowing to the North. Adora stood on the edge of the precipice, and could see other passages in the grey stone across from here, on different levels, and a stone bridge crossing the chasm to the north. While they passed this information back and forth (the party was stuck in a single file, as the cave was so narrow), a six-legged beast the size of a pony appeared on the bridge at the western end. It “looked” toward them, moving its head as if it were searching, the bulbous eyes atop its skull gave no indication of where it was “looking”. Adora shouted back a warning as the creature trotted across the bridge and disappeared into the eastern passage. 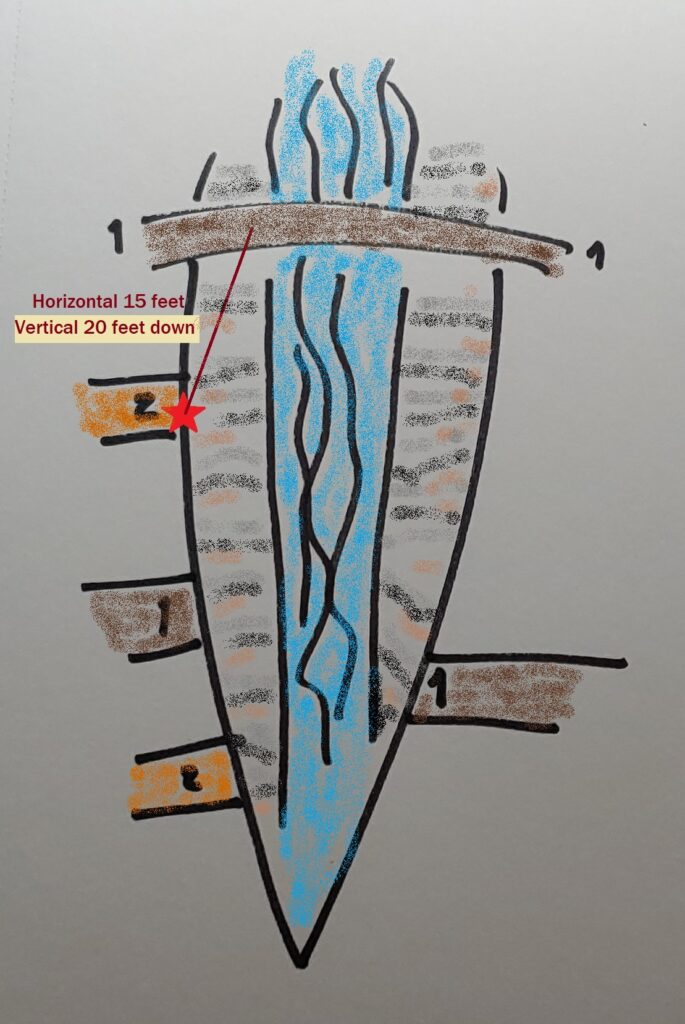 No sooner had the warning gone out than the creature appeared in the torch-light held by the party members at the end of the passage. Oxardozius set his spear for the creature’s charge and it indeed impaled itself in a blind rush!

The creature bowled Oxardozius over, knocking him down and landing upon him with its bulk. He and Pagos stabbed the creature over and over, but it made no attempt to attack further, rather in expiring it vomited blood all over the place. They were able to roll and creature off and Oxardozius rose to his feet, covered in foul, sticky, rusty-smelling blood.

After back-tracking and resuming their marching order, they continued along the passage to the north. After a short distance the passage veered to the left (west), with a cave opening to the north. Shining a torch in the cave they say three large (three feet long!) centipedes devouring …something. The left a torch burning in the crack leading to the centipede chamber and moved west. Indeed, this passage led to the stone bridge across the chasm. On the other side, the lair of the six-legged creature, the floor covered with bones and dung. The smell was terrific.

A cave opening on the other side of the lair soon split again, one passage to the west, one to the south. The crewe decided to go south, discovering a very narrow cleft leading back to the large chasm. Continuing south the passage began to rise, then split once again, either to the west, or downwards to the east. The eastern passage brought them back into the southern end of the first chamber they had discovered!

The crewe decided to pass thru, this time taking the southern passage at the next split. This narrow cave once again reduced them to single file. They passed a small chamber on the west, apparently empty, then the cave curved around to the west and they discovered another vertical cleft.

To the south was a massive cataract of water, flowing down and passing to the north. A narrow (2’ wide) natural stone arch crossed the chasm here. Adora crept across, using her dark vision to scout ahead. At the top of the arch she could see a blue glow in the passage on the far side. She began to hear a whispering voice in her head:

over and over, whispering

whispering and whispering, caressing your mind at the edges

She fought back against the voice, “Ignoring you!”

Adora turned and fled back along the arch, to the rest of the crewe. She told them what had happened and Kalder decided to cross the arch and face this challenge with his magical training. Pagos followed clos

Kalder’s experience was similar to Adora’s, except that he crossed all the way across the bridge. In the tunnel ahead he could see a ghostly figure, bathed in blue light, clothed in old-fashioned robes, with his? Her? (the figure’s face was invisible and the robes obscured its figure) arms raised, reaching out to Kalder.

over and over, whispering

whispering and whispering, caressing your mind at the edges

you hear a whisper: “Jump into the water”

Thinking back at it: You cannot turn me.

Pagos did not see any light, nor hear any voices. So he was surprised when Kalder turned sharply and attempted to push past, toward the edge of the precipice. Pagos grabbed him and they struggled, Kalder’s eyes were rolled back in his head, so far only the whites were showing. In the struggle they fell to the ground, nearly rolling over the edge of the arch!

Adora began to cross over again to assist Pagos, who had managed to get his arms around Kalder and put him into a headlock. A bit of sustained pressure and Kalder passed out, ceasing his struggle. At the top of the arch Adora was once again assaulted by the disembodied voice. She stopped in her tracks, engaged in a mental struggle. Though it drove her to her hands and knees upon the arch, she managed to overcome the voice and force it from her head.

The rest of the party, waiting in line at the edge of the chasm, only saw her fall to her knees. There was no light or voice for them. Maisara and Shazorival made their way carefully across the arch, helped Adora to her feet and across to the other side. Together they grabbed the prostrate Pagos and his “captive”, pulling them both to safety as well. The passage here was a bit wider, and they were able to let Adora sit down next to the unconscious Kalder. Aziagos followed them across the bridge, and with the torch they were able to see the cave going onward to the west, rising at a sharp angle. Aziagos and Pagos took up a position of watch, while Maisara and the apprentice Barber/Surgeons took a look at Adora and Kalder.