In the tunnels below the town a recently-dug passage leads to the ruins of a much older subterranean structure. On the edge of this ruin, a short passage contains the tombs of two persons, evidently dead in the recent past, and leads to the crypt of the former Master of Dungeons. The door to this crypt opened easily, and the unadorned crypt was a dead end.
The coffin of the departed was inscribed with the Hex of Departure, and a different, unknown hex was engraved in the top of the coffin, partially obscured by a wooden plaque. The Plaque was decorated with traditional motifs and inscribed, “Here lies Xegodis, Master of Dungeons, Exalted Champion of Pkutbay, 519-569”.

At the head of the coffin is a 4’ tall wooden candleholder, the stand of which is carved to look like blocks of stone or bricks.

The party left the crypt without disturbing anything and moved further west to explore and discover the source of the odd noise.

They turned the corner to discover a long, wide passage, with a row of carved columns running down the center. The noise must be coming from this passage, as there are small chips and fragments of stone falling from the ceiling. The floor is covered with them, some 2-3 inches deep. As each one falls and hits the floor, the sound echoes and echoes, creating a continuous arhythmic noise. 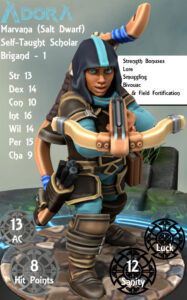 Lieres, Kalder and Adora motioned to the rest to wait, then began to creep down the passage. On either side they were able to see niches built into the walls, with strange murals painted in them. The murals featured tall men and women with elongated skulls or long, elaborate headdresses (hard to tell which, as the designs were s foreign-looking).
As they pass down the corridor, their footsteps grind in the loose gravel, creating mounting echoes that get louder and louder.

The passage is about 80 feet long and ends in a T-crossing. To the left, a stairway going down, though the ceiling has collapsed and the passage (west?) is blocked by rubble. To the right, the passage is also collapsed, but seems to have been dug out, shored up once again by the new lumber. The passage slopes sharply down, limiting vision.
Directly ahead, there is a smaller, narrower tunnel that has been dug into the white stone. It only goes in a short ways before turning to the left, out of sight.

Adora notices something off to the left, in the rubble, whether a new sound or a movement in the debris, she isn’t sure. But suddenly, out from the crevices squirm three of the horrific, tentacled snake-like creatures, called “grave rats” in Maisara’s book.
They streak across the tiled floor, making a high-pitched keening sound. Adora releases her crossbow and Kalder casts Crystal Shards. One of the grave rats is torn to shreds, while the other two swarm up Lieres’ left leg, biting and tearing. One of them sinks its teeth deep into his thigh!

Adora, having no hand weapons, runs back to the other end of the hallway to get help from the others, as the noise is far too loud now for them to hear her shouting. Kalder manages to grasp one of them about its neck and stab it with his dagger. While it squeals in death, the remaining grave rat once more savages Lieres’ leg. Heedless of safety, Adora fires an arrow back at the melee, thankfully it went wide.

The group at the other end of the tunnel can see Lieres flailing about, waving his lantern in one hand and a cutlass (right? Taken from the dead pirates?) in the other. Suddenly, Lieres falls to the ground! 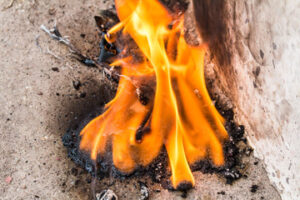 The lantern flies off, smashing on the floor, oil spilling out and flames begin to lick at Kalder’s feet. Kalder too spins around, his cloak flying, and he drops to the ground. The flaming oil snuffs out and all is darkness at the far end of the tunnel.

Adora runs back to check on them, each crashing footstep creating another wave of grinding echoes, louder and louder!!

Adora finds Kalder alive and unharmed, having smothered the flaming oil with his cloak. He is now attempting to aid Lieres in the dark. Adora tears a strip of cloth from Kalder’s cloak, and ties a tourniquet on Lieres’ leg. They pick him up between them and carry him back, once more across the grinding, echoing gravel. The accumulating sound is deafening. None can hear any other speak, so they motion with hand signs in Common.
“Return to the coffin” Kalder signals, and the group make their way back to the Gravekeeper’s crypt. Kalder and Aziagos carry Lieres between them, Adora prepares to open the door, and Lieres just bleeds all over the floor.

They carefully place Lieres’ limp form on top of the coffin, close the door, and spike it shut.
Now that they seem to be safe, the group binds up Lieres’ wounds, as best they can. “We need to get him to a surgeon,” Adora proclaims.
“We can’t go back the way we came, it’s too dangerous,” replies Kalder.
Maisara slumps to the floor in anguish. Kalder asks her for a torch, lights it, and prepares to cast a spell, using the flame of the torch for his spellcraft.

Kalder somehow makes an error in the spellcasting, the torch gutters and turns to ash, and everyone is rocked by a wave of magical energy.

The lantern remains broken and Maisara is down to two torches. It’s time for Plan B…