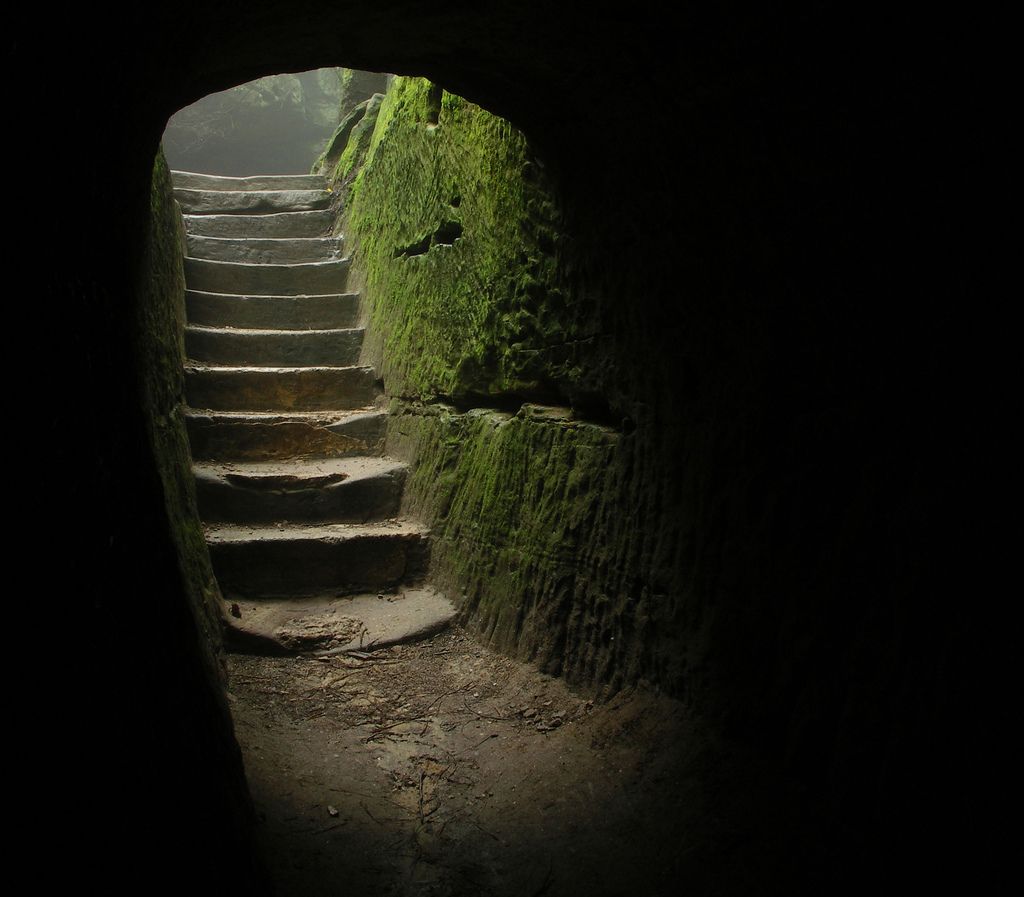 Episode 10: The Mask of Zenopus

The crewe can’t figure out what to do about the sphere, or what it means/does (if anything). Aziagos works on making a detailed sketch, then they return to the cage room.
Moving northward up the corridor, they come to the spot that has an alcove on either side. The first time they were here they found the alcove in the right side had a door leading to the sarcophagus room, the left alcove was empty and cob-webbed.
Now the left alcove ends in a staircase leading down, with the fog along the floor flowing down the stairs.

They decide against going down.

In the cage room they see the four blocks of jade, and the puddle of Deathslime on the floor. Aziagos tries to burn it, but it just gets smoky and smells of ammonia. Then they go down the hall to the “centipede” room with the iron bars. Lieres picks the lock in the Western door, it leads back to the sarcophagus room.
They cut all the paintings from their frames and take them, Maisara and Aziagos have an idea that they can be used to find a particular spot out in the field of giant, ancient stone blocks by the river. Perhaps there is something to be discovered at that spot.

Two large centipedes, as long as Oxardozius’ forearm, come squirming out of the hole in the wall where the stone had been removed, revealing the weird, fleshy orifice. Aziagos and Oxardozius are able to squash them pretty easily.

Oxardozius and Aziagos bend the bars a bit, enough for Maisara and Lieres to slip through! Lieres can find and disarm the trap on the stone box, revealing two crystal tubes with a bright yellow-green liquid inside. Lieres wraps these tubes in a bit of cloth and carefully stashes them in his robes.
Opening the stone box reveals a stash of gilders, about 25 pounds worth! Lieres and Maisara scoop them up (Lieres is carrying enough weight now to max his encumbrance).
Lieres then picks the lock on the door to the south, revealing a “trophy” chamber of another kind, with a large, cheap, plaster statue of Alexandros, some 8’tall. The crewe play around with it, trying to move it or manipulate it. They shove it a bit to the side, but it will only move a bit. Finally, they get the head to rotate about a quarter turn, which causes a horrible sound of metal shrieking against metal or stone!
They decide discretion is the better part of valor, and exit the Mausoleum, closing the door and locking the grate.

Since no one seems to be around, they make their way over to the ruined tower. Maisara tells of the 50-year long search for the item now known as the Mask of Zenopus and its mysterious powers: how the mask has the power to enable the wearer to see events at a distance. Perhaps since Zenopus had vanished, the mask may have been left behind. 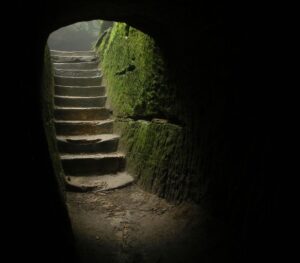 The crewe uncovers the wooden barricade and descends the revealed steps, some 70-80 feet below ground and an equal distance to the west.
The room at the bottom of the stair is blocked by a door, which opens with little difficulty. The chamber beyond is divided into two zones, the North has a pile of broken or used-up items, the south has neat shelving with many (some obviously repaired, some not) new-looking household items. The room itself is clean and tidy, no leaves or dirt or cobwebs. They open the next door after a couple of tries, to find a large room, so large it extends beyond the light of the lantern. Lieres scouts ahead, finds some small worktables and clusters of little “papasan” chairs or cots, covered in patchwork quilts or furs/skins.

The crewe hears a soft noise, a susurrus of sound coming from the west.
They make their way along the east wall, to the south wall and across the room. In the middle of the south wall is a door, with cloak-pegs stuck in the wall, about two feet off the ground. There are an assortment of small cloaks, as thought for children (or Faeries according to Aziagos) and pokes/sacks hanging from these pegs on either side of the door.

Heading north along the west wall they find a similar door, likewise with cloaks and pokes. Opening this western door reveals a staircase going down to another door. That door, too, is hard to open leading into another exceptionally large chamber. 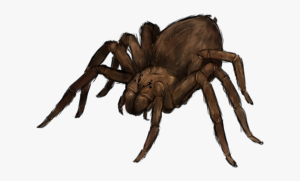 A spider the size of a dog falls upon Aziagos!

There is a brief battle, and the spider is defeated, tossed into a heap of slime covered with small centipedes and large maggots.
The party members avoid the slimy remains of whatever. They find a couple of piles of bones and a backpack, which a brief search reveals contains some rations that are still fresh enough to eat. Aziagos eats some! The bones seem to have been polished…

The crew then makes their way through the door in the south wall, to see a large room, filled with mushrooms! Exceptionally large mushrooms, and tasty edible ones at that. It appears some in the far corner have been cut down, and Oxardozius finds a trapdoor in the floor. It opens to reveal a very steep tunnel going down, with ladder-like projections. It goes down further than the light reaches, the air coming up smells old and earthy and moist.

They decide to go back to the Spider Room and try the other door. This leads to a corridor that does not line up with their map very well, but maybe. 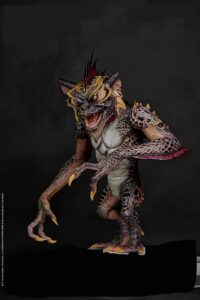 Moving south down the corridor they see, at the edge of the lantern light, a creature clinging to the wall on the right side. It is small, looks like a naked lemur, and seems to have claws and teeth.

Asiagos throws some rations to it, and it flees back into the dark…

The crewe follows the retreating creature slowly, until a bend in the passage becomes visible, turning to the right.