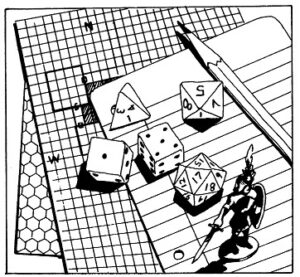 A review of Low Fantasy Gaming by my friend and Campaign member Brian at Welcome to the Deathtrap:

Low Fantasy Gaming (LFG for short) is a game derived from Dungeons & Dragons that is designed to emulate the gritty swashbuckling weird fiction of authors like Robert E. Howard and Fritz Leiber. Magic is meant to be rare any mysterious, while action is meant to be fast, furious, and evocative.

The game mixes strong elements of OSR games, particularly AD&D, with D&D3.5 and even a few D&D 5e mechanics and a dash of OSR community hacks to keep play moving swiftly and evoke Appendix-N-style swashbuckling action

Wandering Gamist has a very informative post about generating rumors. I am a big fan of foreshadowing, and in my own World of Weirth homebrew campaign I’m always looking for ways to spread lore and foreshadowing. The article he mentions about “clocks” is really useful!

Rumors should be plausible, but improbable; unreliable, but occasionally prophetic. Part of the fun of rumors and gossip is guessing at what is true and what is false. But generating facts about the world is hard, especially facts that might be known (or believed) in town, but are still relevant to adventurers.

The Renaissance Troll shows off some painting, a Reaper Bones “troll”. I have a love-hate relationship with Reaper Bones. They are light and flexible and easy to paint without primer, BUT they are very light and sometimes slide on my hills and the detail (on faces especially) varies WILDLY.

Although this figure is listed as an ogre, and will probably seem some use as such in Rangers of Shadow Deep and other games, it also fits my mental image of Middle-earth trolls. In fact, Bobby sculpted three similar ogres, and I do wonder if that wasn’t so people could use them as the three trolls from The Hobbit, should they so desire.

And, yes, I really need to finish up my own Rangers of Shadow Deep collection…