The party took a good bit of the afternoon to fortify their position, and in doing so somehow drove away hordes of insects and other creatures. The crewe believe it may have something to do with the Chaos magic of the Cauldron.

They had a full meal and set a watch.
Arbjorg, Roinseach, and Shavanoxil took first duty. After sunset the swamp around them became very quiet. There was some noise from some monkeys off in the distance, but things were quiet. Baxagos began to struggle with his breathing, Pagos and Roinseach were able to comfort him with Mushroom tea. After the change of watch, some three hours later, Baxagos again began to struggle with his breathing. This time Kosas was able to soothe him.

In the third watch, the small hours of the morning, Shazoruval heard something large moving, out to the NE, and climbed down to take a look. She was able to scout out about a hundred yards and spotted a giant figure approaching. Silhouetted by the light of (the smaller of the two moons, “Solotha”) the Mother, she could only see that the figure was very, very tall. She crept back to the hut and after a brief consultation with Shadoruvan they awoke the Hunters and prepared for an attack.
The creature approached at a steady pace, and called out to them, in a voice deep and resonant! 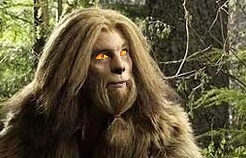 Mudfoot, demi-god of Beasts and Dreams

“Where do you go with such a dangerous item? Who has sent you? Does the Green Lady now send children into my home to fetch dangerous things?”
Shadoravan spoke up, calling out that they were led here in search of a powerful lady, but their leader had been killed.

“I sense that the Green Lady has marked three of you,” he said, “you are in great danger.”

Kosas the Hunter spoke up, that he had had a vision of the Green Lady, and what should they do?

The Beast-giant spoke, “Deliver unto me your dying, I shall bear them to the Hunting grounds of Alcerinda, where they can heal.”
He looked right at Shazoruval, with gleaming golden eyes in a mien like that of a pug-faced lion, “Give the Wayfinder to the Greenmay, she will lead you home.”

Turning to Shadoravan, he said, “My Lady, when you arrive at the Grove, cast the Wayfinder aside – it’s power will be exhausted. Tell the Wishing Tree ‘Mudfoot has sent you’.”

The hunters and the others on watch looked at each other in amazement. The giant stood and, in the light of the moon, you could see he was covered head-to-toe in sleek, dark fur. He reached into the hut and spoke to Pagos and Phalderanos, “Give me your dying companions.”

He took the men and cradled them in the crook of his left arm, they were as babes to him. Then he bent, reached into a canoe, and took up the cauldron in its bundle.
“You will be safer without this, safe until morning in any case. Follow the Greenmay.”

He rose and turned about, striding off into the darkness the way he had come, as a strange, thick fog rolled in to obscure even the closest hut.

Too excited and disturbed to sleep, the group came up with a plan. The skull idol that Shazoruval had found in the other hut was indeed hollow, and opened to reveal a bronze arrowhead. She handed the idol to Shadoravan and the golden casing became warm to the touch. The arrowhead within turned and pointed to the water, where they had originally beached the canoes.

After a hearty breakfast the party portaged the canoes back to the water and re-loaded them with their gear. The arrowhead pointed toward the main channel, and they all decided to follow its lead. Within two hours the flotilla was out of the swamp and back in the main channel of the river. Soon they crossed the ford, and re-joined the main bed of the Jovaan River. They turned upstream and spent more hours paddling against the current.

Upon their return to Portasbol they beached their canoes and followed the arrowhead, which led them to the northern end of town. Straight to the Grove of the Nurdiyan, in the shadow of the Temple of Orphune.

Upon entering the Grove, they were soon stopped by a pair of young woodsmen armed with short spears. Shadoravan told them she had been instructed to go to the Wishing Tree. One of the woodsmen whistled a birdcall and more of the guardians appeared. One of the young female guardians told shadorivan to follow her. 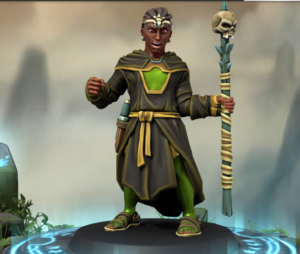 She took Shadorivan on a long path to the center of the Grove, a path that was far longer than the exterior of the grove would suggest. After some time they reached a clearing dominated by an enormous tree, its leaves are dark, dark green, and the bark is almost black.

There was no face in the tree, but Shadorivan thought there ought to be. Her guide instructed here to sit and meditate, think on the tree and perhaps the goddess would speak to her.

Meanwhile the rest of the crewe waited. Shadorivan had been gone for quite some time, nearly half an hour. The group was getting restless when an older Telantean woman appeared, seemingly from nowhere. She was wearing a brown robe with orange trim on the sleeves and around the hood. The orange fabric was very coarse, like burlap.

Introducing herself as Bruney the Nurdiyan, she asked the party why they were there, and they explained as best they could. She spoke to Kosas and Phalderanos about going away to cleanse themselves and return at sunset. She told them she would see to Shadorivan and the rest could go about their business. She turned, stepped off the path, and vanished.

The guards escorted the party back to the edge of the Grove, along a seemingly much longer path than the one they had used to enter.

The party returned to the docks, retrieved their gear and “plunder”, then took a room at the Green Dragon. All of them treated themselves to a hot bath and fresh clothing. As there was no time to eat, Kosas and Phalderanos made their way back to the Grove for sunset.
Shazoruval went to visit her mentor, the Barber/Surgeon Kalomur (a Xythian man of about 40 years), looking for guidance and a room for the night. Pagos stayed in the room to watch the gear, and the others went out on the town.

Back in the Grove, Shadorivan was interrupted in her meditation by Bruney, the Nurdiyan of the Grove. Bruney asked her about the vision, and about the scars on her arms (from the brambles). Shadorivan was not sure how she had received the scars, and was unsure of the vision, until she realized the Nurdiyan’s robe was in the same colors as the butterflies in her dream. “It was you!”, she cried.

“No, child, it was not me, it was a true vision from Ekalwyn, the Green Lady and goddess of the Grove.” Bruney replied.
“If you wish to learn more, come, and bathe in the sacred pool. You may join our Order if you wish, and much will be revealed”, she explained as she led Shadorivan from the clearing and into the wood. Soon they reached another, smaller, clearing. One with a small, natural pool with a surface like a mirror. 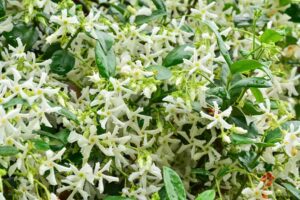 Bruney led Shadorivan to a tent or small pavilion, where two girls were waiting to receive her. They told Shadorivan they would take her clothing to be cleaned as she bathed in the sacred waters. They invited her to join them as a Greenmay.
Still not sure what that meant, Shadorivan was agreeable. Holding a long, trailing sprig of “Five Horns” (a vine-like flower the girls called Star of Ekalwyn), Shadorivan entered the pool.

When Phalderanos and Kosas returned to the Grove, it was just before sunset. They were greeted by a bare-chested young Telantean man (early twenties?), dressed only in a brown kilt with orange embroidery in a zig-zag pattern.

He was accompanied by two more young men in the green-on-green of the guardians they had met earlier in the day, with the addition of an orange-and-brown zig-zag patterned sash.

The men in green were holding long bunches of the flowering vine called “Five Horns” in one hand and a rushlight in the other.

The kilted man greeted them with open hands, saying, “Blessed evensong to you! Are you prepared to set all aside and join the fellowship of Ekalwyn? I see you bear the marks, are you willing to bear the burden?”

He holds out his arms to you, and in the flickering torchlight you can see shiny, coin-sized round scars on his forearms.