The World of Weirth is a setting much like a Hyborian Age, with danger at every turn, Swords & Sorcery magic, demons and mad prophets. Check the world of Weirth tab above for more info, including a draft of the Player’s Guide.

Episode 7: Trackless Swamp of the Half-Dragons 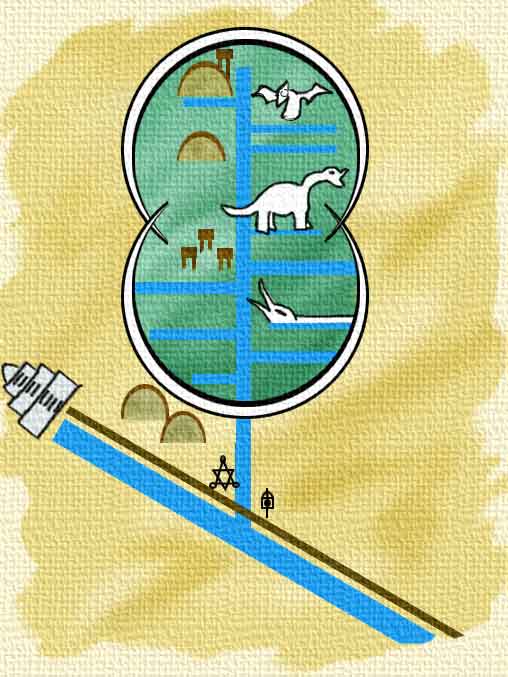 Our intrepid Apprentices carefully moved their wounded and unconscious companions into the canoes, while consolidating the remaining supplies. After searching their late leader’s canoe and finding her map they strategized on how to best load the boats. They decided to separate the Treasure, Cauldron, Food and Map into different boats, to prevent losing everything if they were capsized by one of the giant river monsters they had encountered during the trip out.

As the party launched their canoes, they spotted a handful of additional Returners approaching over the hill, one in ornate armor and two more with rusty halberds. Deciding discretion was the better part of valor, they shoved off and left them behind.

The map proved to be a little tricky to read, but with only two wrong turns leading to dead ends they spent most of the afternoon getting to the abandoned village on the edge of the river.

This trip was a little different in another aspect, in that they were not bothered at all by bugs and biting insects, as they had been on the way into the swamp. In fact, at one point, while entering a narrow channel, the silent canoes seemed to spook a covey of pheasants or woodcocks into flight. The mad beating of their wings shattered the stillness of the swamp, but, strangely to their minds, attracted no unwanted attention.

They saw not frogs, fish or other swamp creatures they were expecting.

Roinseach voiced her suspicion the cauldron itself is having an effect on the wildlife, driving it away. This prediction would prove auspicious, later.

The two unconscious members of the party were observed to be getting more pale and having labored breathing, so the decision was made to pull in at the village and let them get some more stable rest and perhaps a bit more care.

Thankfully, the shoreline here was not so muddy, though the party members were still covered in mud and dried slime from the Witch’s isle.

Reconnaissance of the village turned up a few interesting things, first being a cluster of “leather bags” hanging from the rafters in the first hut they checked (1). Roinseach attempted to take down one of these bags and it burst into a flurry of motion! Immediately the room was filled with beating, flapping wings and a hideous keening sound. Roiseach nearly tumbled out the door, as the Vampires escaped out a hole in the thatched roof of the hut.

Meanwhile Shavanoxil and Gonuxal were exploring another hut (2). This one had no roof or floor, it had rotted away. On a shelf of woven branches on the wall, however, were two clay jars, about one pint in size, with waxed stoppers. Brief investigation revealed that they both held liquids, one smelling like mushrooms and the forest, the other like cinnamon. The cinnamon-smelling liquid seemed much more viscous.

In yet another hut (3), Shazoruval found nothing but the litter of rotting furs and hides, with something underneath. That something turned out to be bones! The lower half of the skeleton of a human, the bones picked clean. Is scrambling away from these bones, she discovered a small golden skull, about 3 inches in diameter, possibly hollow. She climbed back down to find Arnbjorg to help perform a Hex of Departure, so the bones would remain resting in peace.

When the Vampires did not return to attack, Roinseach again mentioned her idea that the cauldron was driving away creatures, and that they’d likely be safe here for a camp.

The party brought Gulovil and Baxagos up to the hut and made them comfortable.

It is early evening, about two hours of daylight left, and the area of the village around the hut is quiet as a tomb, no birds or insects about. Some angry monkeys can be heard in the distance, perhaps a hundred yards away, or so.

There is just enough food for a meal tonight and one tomorrow. The waterskins are pretty much empty and the remaining water barrel has about two gallons of water left in it.