(I’ve been working on this off and on for a few days. Having trouble getting my thoughts together on it…)

Having been away from the RPG hobby for a while, I missed the advent of the Difficulty Class mechanic.  Catching up on blogs and articles has been illuminating. There is a good deal of discourse about whether Ability scores are even needed, as one can just jot down the bonus/penalty modifier.

Bomgard the Wizard needs to make an Intelligence check at DC 15, what his score? Plus two.

And, yes, I get it. It makes for a uniform style of d20 roll across categories, where you are always trying to roll equal to or above the “target number”. Core mechanic and all that modern design thinking. No more THAC0. No more subtract AC from 20 to get the Target Number. (Which isn’t precisely how THAC0 works. THAC0 is the target number, which is achieved by rolling a d20 + modifiers (STR, Weapon Type, etc) + AC (descending AC, that is!). If this result is equal to or greater than the THAC0 target, you hit. Leaving Level out of the equation allows for varying rates of progression.)

As I see it, the DC does not save a step. There isn’t any math involved in the Ability Check mechanic. Perhaps this is just my Old-School way of thinking (which pre-dates Non-Weapon Proficiencies or Skills or Feats) in that Ability Scores mean something. If a Fighter with an 18 STR needs to make a check for an activity against his STR he has a 90% chance of succeeding. Because all STR-related things are essentially easy for a person with 18 STR.

Which leads to my “first impression problem” with DC, in that the Target Number is the same for everyone regardless of the Ability Score. A party member is trapped under a fallen beam from a cave-in. You need to make a STR check to lift the beam and let her out. A PC with an 18 STR has a 40% better chance of success than a PC with a STR of 10. Even if you modify the roll, by saying it is a HARD task and assign a -3 penalty, as the penalty applies to both characters.

That certainly changes things! Looking at Ability Scores from the POV of overcoming the challenge by way of the DC certainly does seem to make the idea of an Ability Score (rather than just a modifier) obsolete. But changing the methodology to accommodate a perceived need for a standardized “Core Mechanic” fundamentally changes the math. I believe it also changes the experience of play, and not in a good way.

There is a Q&A discussion on Stackexchange about who invented the DC mechanic, and I think there is an illuminating quotation to be pulled:

Peter Adkison — who had previously left third edition design work to Bill Slavicsek and a group of ex-TSR employees — decided to write a basic philosophy for the new edition that would guide future work. […] He called for a new game that would keep the feel of the original D&D rules, but would throw out things that didn’t make sense. He also named Wizards of the Coast RPG head Jonathan Tweet as the new leader of the third edition project. […]

In my opinion there is nothing nonsensical about having a Roll-under mechanic and a Roll-over mechanic in the same game.

5e merely retains the idea of Ability Scores for the purpose of generating a Bonus Number to be applied to a DC roll. That is perfectly fine, as the designers have decided to throw out the idea of Ability Scores having a mechanical effect on the game. The next, obvious step is to eliminate or reduce the variety of Abilities, perhaps to just Physical and Mental categories, ranging from -3 to +3. This would certainly streamline the entire mechanical process, which may or may not be a good thing, depending on your point of view.

Obviously, with the proliferation of “rules-lite” and “one-page” systems, there is a market for streamlined gaming mechanics. (Some of these folks would likely have a stroke if confronted with Rolemaster or Rogue Trader!) That just isn’t for me. I like the idea of having a variety of Ability Scores, and for those scores to mean something, to have a mechanical effect.

Why I Like the Idea of a Difficulty Level

Having said all that, I will say I believe there is a place for the DC (or DL) concept. The ever-entertaining and insightful Professor Dungeonmaster, on the Dungeoncraft YouTube channel, has an excellent idea for using DCs in a dungeon setting, as a zone effect. A good example is in the Hobgoblins! video where he describes how he has developed the idea from Index Card RPG.

The good professor divides his dungeon into zones, based on a common DC for all of the rooms, traps, encounters, etc. 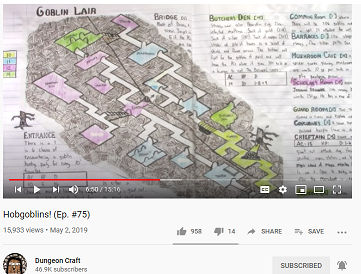 I do like the idea that some rooms or areas in a dungeon are just harder to deal with than others. Gas, magic, the presence of environmental effects like flooding, all can be fun ways to increase the challenge for your party. Applying a blanket modifier for an area or zone makes perfect sense in this context.

All actions and activities (that could be hampered by knee-deep water) in the flooded tunnels are at -2 to success.

This makes for a cool challenge. It is also very easy to indicate on a map, or as a bullet-point in a room or area description. It also has the benefit of not changing the mathematical relationships between characters of differing Ability Scores.

Another feature of a Difficulty Level mechanic is that it can be used to ramp-up the challenges as a party descends deeper into a dungeon. If the pernicious and inimical effects of a Mythic Underworld grow as the party goes deeper, you can increase the challenge with a modifier of (Dungeon Level – Character Level = DL). Thus, a party of second-level adventurers descending to the fourth level of a Mythic dungeon find their actions and activities hampered (-2 to all rolls) by their inexperience with the oppressive nature of the dungeon itself, while a party of fifth-level delvers would have no additional problems.

Let me know what you think in the comments!

One Response to Ability Scores vs DC – Rambling Thoughts