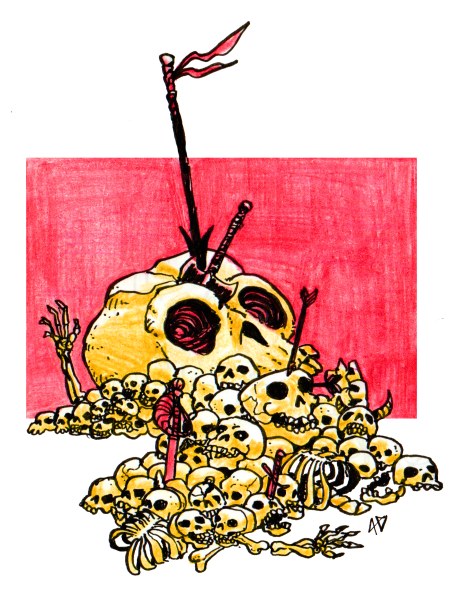 All five players have two 0-level Apprentices for this adventure. A quick trip to help guard a merchant who is looking for a witch in the swamp. Should be easy…

The journey begins with the 10 of you setting out in four canoes, first thing in the morning. The sun is just rising, illuminating the docks of Portasbol and there is a light mist or fog rising from the river.

There are three men at the docks to see your party off, a Telantean that Shavaligan addresses as “Master Ploon” and two others in long, dark robes. These have their hoods pulled up, their hands tucked into their sleeves, so you are unable to tell anything about their identity. While you were helping load the canoes you passed near them, they had an aroma of sweet spices, like cinnamon, but something else, too. (James’ char Shavanoxil thinks it’s Black Lotus!)

Shavaligan and two of her personal guards are in the first canoe, along with some bales, amphorae and bundles of supplies. Four amphorae – three good red wine, one brandy, a chest with 100 SP, a pouch with 20 GP, a wooden stick (about 14 inches long of a dark red wood that is hard as a rock – Bloodwood, for making a wand, worth 200 GP) wrapped in linen and inside a leather wrap.

The rest of you are split up into the other canoes, one of which has a bundle of torches wrapped in oilcloth, two coils of rope, a bag of wooden stakes, four ten-foot-long tentpoles and two folded sailcloths. The third canoe has two sealed amphorae (about 2 gallons each), some folded wooden contraption, and two baskets with bedrolls. The fourth canoe has four passengers.

Morning Watch – The weather is cool and cloudy, with rumbles of thunder. Paddling downstream, you make good time. From time-to-time you see carts and wagons and short caravans on the river road on the east bank of the river. All of the traffic seems to be going south, toward Laralasbol.

Mid-day Watch – Line of dark clouds blow up, light rain for about 30 minutes. Something large surfaces and roils the water between the second and third canoes, making a small splash. It surfaces again, this time to the west of the fourth, closer than before. Whatever it is swims beneath the canoe and rams it!!

Baxagos is dumped out of the canoe, into the water, he doesn’t know how to swim!! 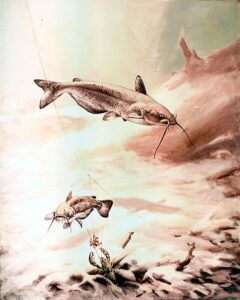 Shadoravan does, and she jumps in to save him. She is able to grasp him just as the enormous mouth of the river monster breaks the surface!

She is able to kick away, allowing Baxagos to grab the side of the canoe. He pulls himself in as others in the other canoes ready their weapons. Spears are jabbed and an arrow fired, to no apparent effect. Shadoravan is pushing Bax toward the boat when she is scraped by the scythe-like pincer-mouth of the creature!

Baxagos is able to climb into the boat, followed by Shadoravan, with some help from Anbjorg – who grabs her under her arms and hauls her bodily into the canoe. She is hurt, and Irganos is not much help.

Deprived of its meal, whatever the creature was, it seems to vanish in the murk.

Afternoon Watch – During this watch the little flotilla reaches the fork of the Jovaan and you swing north, going upstream. After about a mile there is a ford, where the river broadens out into a wide, rocky-bottomed pool about four feet deep, you can see the bottom clearly. There are hexes and poles galore on either side of the river here. Just a mile upstream, you can see on the north bank, the skeletons of two humans, headless, picked clean and bleached by the sun.

Evening Watch – As the sun begins to descend, Shavaligan directs her canoe to the northern shore. You all beach the canoes and begin setting up camp. The two guards start putting up hexpoles and possibly laying out a Circle of Protection.

She directs you all to find the food and cooking supplies in her canoe, start a fire and get to work on a hot meal. She takes the wooden contraption from the canoe and sets up a chair and a small table.

Shavaligan directs two of you in setting up the fly tents and the rest in starting a fire and heating rice and dried meat for dinner.

Shavanoxil helps bandage up Shadoravan, but is dismissive and rude about it.

Dinner is good and uneventful. More clouds and lightning on the southern horizon at sunset. Shavaligan writes some notes or something in a small codex, then sends her guards to their bedrolls. She will take her first watch with Anbjorg, Roinseach, & Irganos. The rest of the watch is uneventful.

Midnight Watch – One man-at-arms, Gonuxal and Shadoravan are awakened for the dog watch. It is cloudy, so no stars or moons. Right around midnight a large owl with a snake in its talons lands on the edge of the firelight and eats the snake. Gonuxal grabs his writing implements and draws a sketch of it.

Predawn Watch – The second guard Shazoruval and Baxagos are awakened for the last darkwatch. The guard is lonely and likes to talk about his family (three children and a lovely wife who adores him but isn’t as pretty as his brother’s wife or the neighbor to the west’s wife) About an hour before sunrise, three meteors streak across the sky, one after the other.

Baxagos gets down on his knees to pray to his god!

Morning Watch – As you all arise for breakfast and pack up the camp, you can see dark clouds begin to gather on the horizon to the South. As you go to re-load the canoes, you discover that there are a bunch of large frogs hiding under them. During the loading an enormous fish bursts from the water, attempting to bite the party member closest to the water. Momentarily startled, everyone attacks! Either with missile weapons or melee, Shava and Bax score hits!

Gonuxal runs down alongside the giant fish, waving a sausage. The fish twists and bites him on the arm, fairly savagely. But it is unable to get a good grip and it flops back into the water.

Shavaligan appears, as if from nowhere, to aid and assist Gonuxal, taking him to her table and treating his wound with ointment.

The Men-at-arms guard the shoreline, with spears braced, while the boats are re-loaded. You shove off, just a bit behind schedule.

Mid-day Watch – While continuing to paddle (mostly) north or east, Shavaligan has been consulting a map, and having a running conversation with her guards about where they were on the map. How much farther to go? Where was the ruined village?

Suddenly, on the south bank, you can see a handful of huts on stilts poking up out of the marsh. The trees around here are all cypress, covered in hanging moss, but looking dead, without any leaves of their own. As you get closer, the fitful breeze dies down, bird and insect noises stop. The silence is deafening.

At the very edge of the abandoned-looking village there is a mound rising from the water. It is covered with dirt and has a few scraggly-looking saplings. At the top of this mound is a human shape, laying on the ground, propped against a small tree.

Shavaligan shouts, and points toward shore.

You all row your boats to the mound and beach them. Upon leaping out onto the shore, you discover it is soft, sucking mud!

Shadoravan and one of the men-at-arms fall face-first into the mud. The group staggers to dry land, with Roinseach among the fist, she runs up the hill to the tree line to observe. Shava joins her, just in time to see four bizarre creatures flying toward them on bat-like wings. They have bodies like empty wineskins and long, sharp beaks like wading birds. Shava runs back to the group, still in or near the mud, yelling. The creatures flutter around Roinseach, but seem to get in each other’s way! She is unscathed.

The party members on the land fire arrows or, like Baxagos, run toward the creatures. One falls to Roinseach’s spear, another to an arrow, but the third attacks Bax, gripping his waist and jabbing its proboscis deep into his belly!

Another party member joins the fray, smashing a blood-sucker out of the air, while Bax struggles vainly to pull the monster from his abdomen. It continues to suck out his lifesblood. Shadoravan is able to finally run forward and pierce the final creature with her spear, spilling blood and ichor everywhere.

Bax falls to the ground, gravely injured, and three party members attempt to assist in bandaging him up. Shava is strangely unhelpful, once again.

As the party re-groups and scans the area, they hear a rustling in the leaves, looking up they see branches swaying in the wind. But there is no wind…

Tune in next time for more exciting action!
LFG Playtest Campaign 1 – The Shadow of Evil Chaos is an experiment with a new (to me) game system, Low Fantasy Gaming, and a new magic hack designed to bring the atmosphere of danger from the pulp novels of Swords & Sorcery. We are playing fully online over a Discord Voice server, using some home-brew maps, art and characters designed on the HeroForge 3D printing site.
Follow all of the posts here: LFG Playtest Campaign 1.