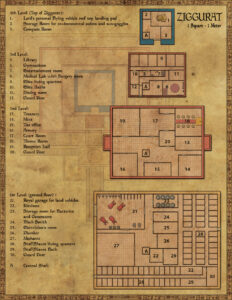 Ziggurat map by Sapiento on DeviantArt

I needed to make a basic temple for the World of Weirth campaign, as the centerpiece of each town or city. Of course, the larger the settlement, the more ziggurats there would be, and larger ones, too!

For now we are going to start with a temple on a 150 foot square base, rising four levels. The temple proper, on the fourth level, will be sixty feet above the ground, its roof rising 25 more.

Because I don’t anticipate the party to be busting in to invade and conquer any occupied Ziggurats, I’ll be okay with just the one floor plan for a while.

I love using the Isometric paper for drawing the dungeons, it makes them look much cooler than the plain-old graph paper. But stacking these particular levels was a challenge to visualize, as I wanted to be semi-realistic (in that Level Two’s thick outer walls are supported in Level One) and because there is a hollow shaft running vertically down the center of the ziggurat, into unknown depths.

So I drew it out on quad-paper first. 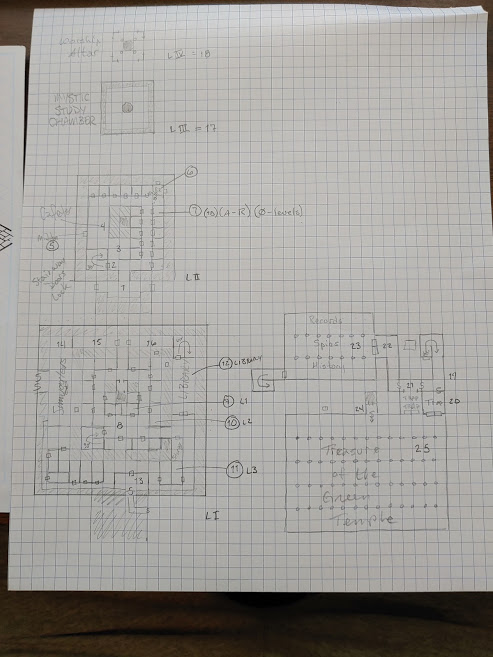 Then I plotted out a draft image of the ziggurat and temple itself, with the stairs and all, so I could get a feel for how it would look stacked up together. 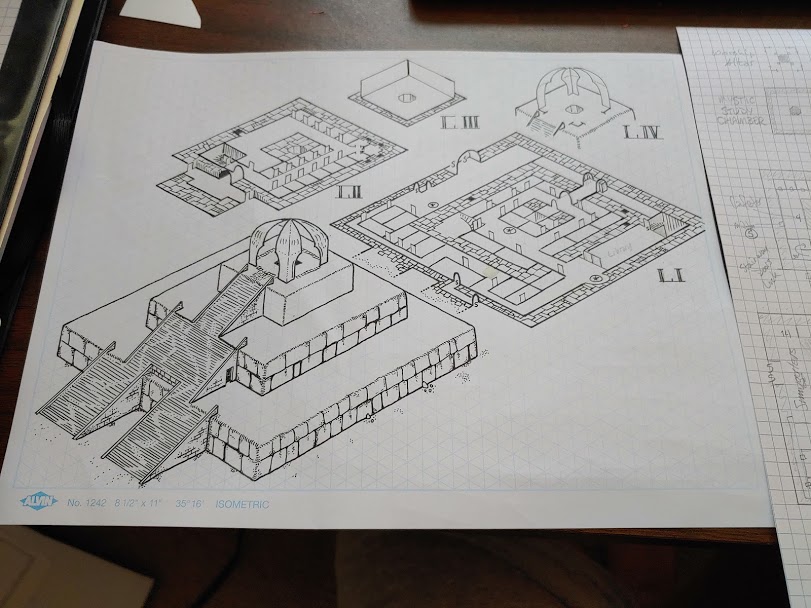 As you can see, I am still working on developing my “signature style” (don’t have one just yet!) for the solid walls and shading an such. Here for the interior walls I drew in building blocks, which was pretty tedious. I like the look of it, though, and I may scan this map so I can load it into GIMP and do some shading. I’d also love to have a mural on the wall of Level three and maybe drop some sphinxes on either side of the staircase there.

The main entrance to the temple is on Level Two, under the stairs, one door on each side. These can be locked. There is a secret entrance on Level one, under the stairs, with access to Room 13, the Armory. This entrance is only known to the inner circle of the Temple cult, and perhaps some of the high-level Exalted Warriors.

1 – Entrance – during normal Temple hours this room is staffed by a Level One Initiate and about three Zero-Level Aspirants to greet and direct/guide any visitors. When the Temple is “closed” the room is guarded by a Level Two Acolyte with some defensive spells and a brazier for spellcraft power. Depending on what else is going on, there may be from 4-7 Spearmen/Aspirants to guard the doors as well.

2 – Stairs Down – this door is kept locked, and only fully-ordained members of the cult have a key to the Living Quarters below.

3 – Ritual Cleansing Room – before entering any of the Temple spaces, the cult members will wash and perform cleansing rituals.

4 – Cafeteria – There is room for 60 people to sit down and have a meal together. This is typically very simple fare of Created Food. The blessing and bounty of their god. This room is occupied by a Level Three Adept overnight, to provide assistance or counseling for any of the zero-level neophytes or those who are visiting.

7 – Eighteen cells for zero-level Aspirants – those who come to the temple to join in its practices, or for healing, or for study, are housed here. There are two occupants per room, and each has a pallet, washbowl & ewer, small table for books, meditation supplies, and perhaps a small chest for writing material or the like. Personal property is generally not allowed, being stored below.

8 – Ritual Cleansing Room – before entering any of the Temple spaces, the cult members will wash and perform cleansing rituals.

9, 10, 11 – Cells for Ordained Clerics – Each is set up for two-to-a-room, with sleeping pallets or cots, washbasin, small table, 2-3 chairs, a chest for religious accessories, perhaps a small wardrobe and/or a bookshelf/scroll rack.

12 – Library – the temple’s collection of books, codices, scrolls, etc. of religious and magical import. There are a handful of small tables with chairs for reading and study. The Librarian’s desk has writing materials.

13 – Armory – Weapons and armor for the guards, soldiers and Exalted Warriors are stored here. There is also a secret entrance to the ziggurat here, known only to the Innermost circle.

14 – Storage (Smuggler’s Hall) – the temple will often have need to store large amounts of bulk supplies, especially in times of siege, Skarn attack, and so on. This large chamber may also be used as part of a revenue-generating scheme involving “merchants” and “traders” that is perhaps not fully approved by the secular government. There is a secret door leading outside that is large enough for a wagon-and-two to pass through.

15, 16 – Chambers – for the most senior of the Ordained priests and priestesses of the Temple. These rooms are usually set aside for one occupant, with sleeping pallets or cots, washbasin, small table, 2-3 chairs, a chest for religious accessories, perhaps a small wardrobe and/or a bookshelf/scroll rack. Higher level priests tend to have more research materials and “personal property”, depending on how ascetic the cult is.

17 – Mystic Study Chamber – A room with no windows or doors, the only entrance being the central shaft that runs from the top of the ziggurat to the base (and perhaps beyond!).

18 – Worship Center and Altar – details per patron deity or cult.

Here I am learning about GIMP for making maps cooler: 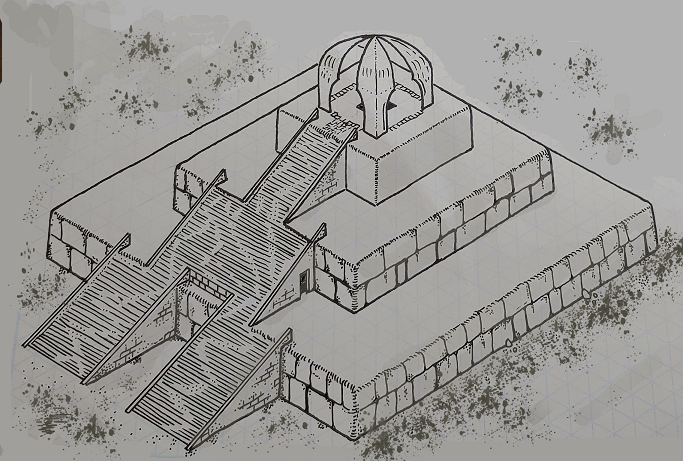 I will be adding this resource to the forthcoming Downloads page, in the meantime feel free to use and modify this Ziggurat Map and Key to fit your own campaign (Attribution-NonCommercial-ShareAlike 3.0 Unported (CC BY-NC-SA 3.0)).

It is also compatible with the Low Fantasy Gaming system I am using for my current campaign.