The game called D&D is over 40 years old now.

Many of the people that invented it have passed on, so we can’t ask them what they think of the state of the hobby today. But that’s okay, because some people think they know, some people don’t care, and others actively despise what those men and women created.

TL;DR – The D&D hobby is made up of a diverse group of people from many backgrounds, ancestries and cultures (see what I did there?). Some of them look at this picture and see a rabbit. Some look at it and see a duck. 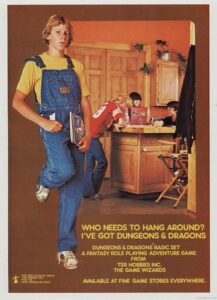 As far as I can tell there are two major groups in the D&D/TTRPG Hobby right now (and a bunch in-between):

All of these approaches are valid. You may not like or desire to participate in one or more versions of the TTRPG experience,

but that does not make those other versions WRONG.

There is No Community

Yet, to see the conversations on social media, some members of each group think other groups are doing it wrong. Or they think that members of other groups are involved in some activities in their work or personal lives that should disqualify those people from being part of the “Community.”

Everyone needs to stop acting as though they have been gifted with the enlightenment of the ONE TRUE WAY.

If you don’t like pineapple pizza, then don’t eat it.

Of course, now someone is going to try to drag me for likening pineapple pizza to alleged acts of raaaaacism or some other foolishness. Those folks know damned well that is not what I said, nor is it what I mean.

“IF YOU LOOK FOR THE BAD IN MANKIND EXPECTING TO FIND IT, YOU SURELY WILL.” — ABRAHAM LINCOLN

Quote written by David Swift, for the movie Pollyanna

What I do mean is this: Find your community. Find your group of like-minded individuals and do your thing. Have fun, together, doing that thing. Whatever that thing is.

Stop worrying about what the other kids are doing over at their table.

One thought on “We’re Just not Playing the Same Game”