It has been a busy week at Casa Purple Druid, with much work done out in the summer heat and humidity. Which leaves little energy for anything else! But, I have been working on the Faerie Realm setting (which I still need a name for) for the Gygax 75 project. This has been a lot of fun, and it has generated some new ideas for tie-ins to the Weirth Campaign.

Week One – The Concept

Task one: Get a Notebook

I love notebooks. I love writing in them, starting new projects in them, it’s a thing. A fetish, probably. (I’m tempted to blog about my #BuJo notebook setup for Oct-Mar that I’m working on…) It’s hardbound. Dot-grid paper. Nice and smooth, really takes the ink well. (It’s Pen + Gear from the Wallie store. I picked up a stack of them in a 2-for-1 sale last year at the end of Back-to-School season. Which is a lot less well-stocked this year.)

I scribbled down a bunch of notes on loose leaf paper, then tried to get a semblance of order as I transferred them to the notebook.

Three to seven bullet points, for “selling” the world to the players. I suppose that’s what I need to do, as I’m certainly sold on the idea. I think it’s great. Let’s see if we can make something coherent out of my crazy mish-mash of an idea.

The initial source of inspiration for the physical layout of the Faerie Realm was this post at Blog of Holding – Unnamed Setting.

a world where there were all these mountain ranges, and all of civilization – the good part of civilization – has been driven up to the tops of these mountains, and then there’s a tremendously thick cloud layer, so wherever the sun shines is where good exists. Everything beneath the cloud layer has been overrun by evil. There are cloud ships that sail out from these mountain-top cities across the clouds, and the adventurers rappel down to the world where they go raiding the ruined cities that used to be down there, looking for gold, metal, and all the kinds of things that they don’t have in these mountaintop cities.

Here is another piece of that article (I recommend you go read it all!):

Here’s the other great setting I read this week: The Original D&D Setting, a series of blog posts by Wayne Rossi. This teases out the weirdness that you get if you take the original OD&D books and play its assumptions to the hilt. Griffin-riding Arthurian knights wait inside sinister castles, swamps crawl with dinosaurs, there are Martian creatures in the desert, and undead shamble through cities.

So let’s do it! Let’s take these crazy ideas, re-skin all of the “traditional” fairy creatures into monsters of darkness and horror, and cram them into an exaggerated version of the Implied OD&D Setting. 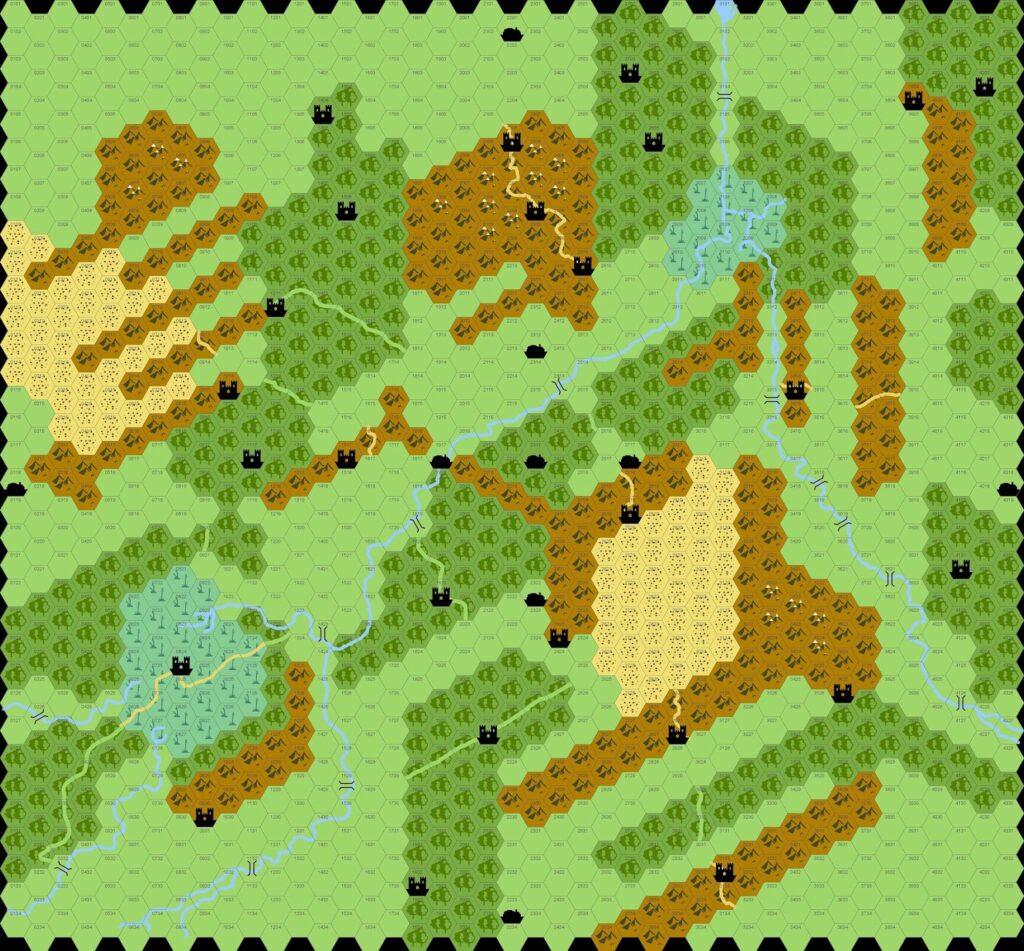 The land of Fairie might be called the Dreadlands. I’m still working on it. With all covered by a thick bank of storm clouds. The snow-capped peaks you see on this map are where the other, much nastier, population of Faerie is. This is the “world map” of the Faerie Realm.

We can also imagine and construct the population of the Dreadlands from the old OD&D table, helpfully spelled out by an old post at Swords of Minaria:

By terrain type and encounter odds, this indicates the whole map contains an average of 44 large hordes of men and 41 small parties of heroes. Of the hordes, about 17 are bandits, 12 brigands, 7 nomads, 6 berserkers, 2 dervishes, 2 cavemen, 1 buccaneer and 1 group of river pirates. The heroic parties are equal numbers of fighting-men, clerics and magic-users with an average of 8 individuals per party. All told, this indicates there are 7,588 men roaming the countryside.

Now, imagine that the “planar” surface of the Faerie Realm is rippled, and in some places it intersects with the Prime Material, say, the areas in red, below. These would be places where Magic is stronger on the Prime Material, yet weaker in Faerie. These ripples don’t necessarily indicate mountains, just where the two Planes connect.

Next week we’ll dig deeper into the map, the factions, and some encounter tables.

Read the original article here, How to Campaign, by Gary Gygax. Thanks for reading and please, share a Comment!