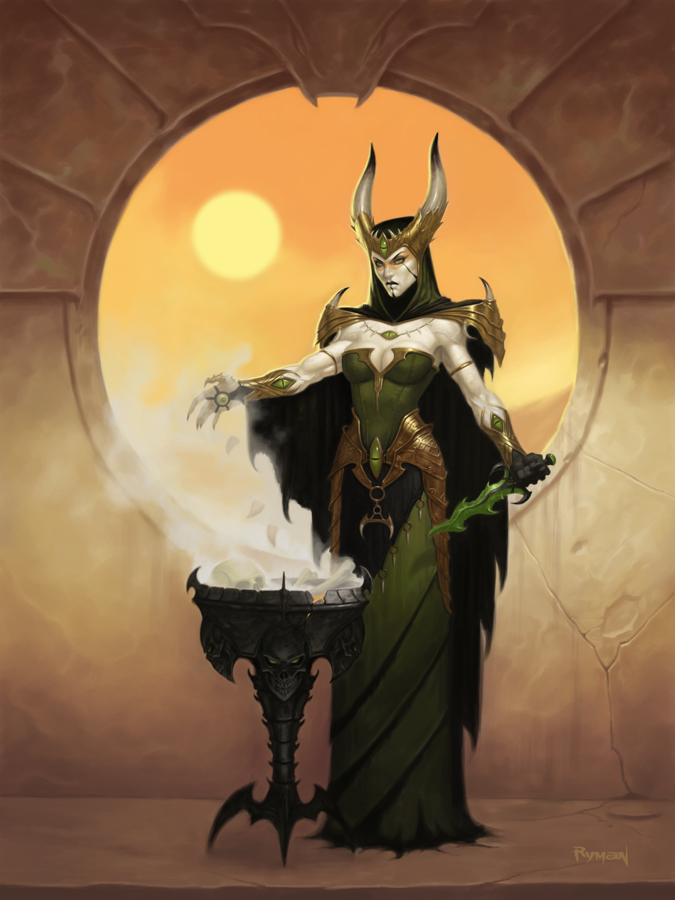 After much research and soul-searching, I have completed the first draft of the magic system for the World of Weirth Campaign Setting. The setting can best be described as Swords & Sorcery, with a grim and gritty aesthetic. Visually, I believe it looks like the old Conan movies from the 80s, Frank Frazetta and Boris Vallejo art.

To capture that feel for the magic system I do not want it to be “fire and forget” hand-wavery. Casting spells has consequences. The power for magic comes from the Magic-User’s own body, a brazier of burning coals, or from supernatural entities in the Outerdark.

As always, I am indebted to those who have gone before, and done the yeoman’s work of researching and combining ideas. This magic system owes its bones to the Age of Conan Supplements for OD&D by Jason Vey and to the highly atmospheric magic rules from Dungeon Crawl Classics.

This is a first draft, it has not seen any playtesting yet.

Any similarities to any real-world magical practices are unintentional, because I didn’t do any research on them. The details of Spellburn and Animal Sacrifice will be left up to actual play, no specific descriptions or “magic words” are required.

The draft versions of the Magic-User character classes can be found here: Magic-User tag

I look forward to any comments or suggestions. 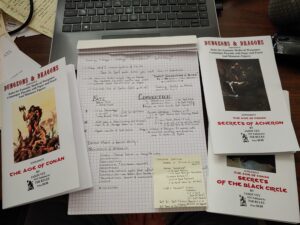 [This section is heavily influenced by/borrowed from the Age of Conan Supplements to OD&D by Jason Vey and by the “Spellburn” rules from DCC. No trademark challenge is implied. To both, I say “Thank You” for doing the heavy lifting on this!]

Magic Spells of Levels I & II are fairly common and easily powered by the life force of the caster, blood sacrifice or a sympathetic energy source (usually hot coals, but can also be running water, such as a water wheel).

These spells can be prepared each day with 30 minutes of meditation and memorization.

These L I and L II spells may be cast without an outside power source, up to two levels worth of spells per day (sunrise to sunrise).

For example: A third level Magic-User has the ability to prepare and cast two L I spells and one L II spell per day (INT bonuses notwithstanding) for a total of four levels of spellcraft. In order to be able to cast all three spells, they will have to either:

When a Magic-User casts a spell of L III or greater they will make two rolls (spells of L I & L II only require a Spell Failure Roll):

Spells of the higher levels, especially those cast from scrolls or performed as Rituals from one’s spellbook are too draining for a Magic-User to power through their own life force. That of a powerful energy source or a supernatural entity must be used or summoned. 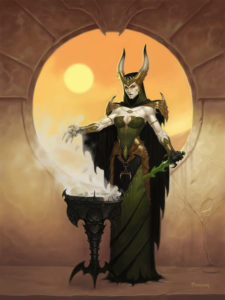 Summon Patron – Upon gaining 5th level of experience the Magic-User will need to perform the Summoning Ritual, in order to gain access to spells of third level (L III) or higher. The Magic-User can cast magic spells chosen from a list particular to the supernatural entity summoned.

The Summoning Ritual is the ONLY LIII spell that can be cast without supernatural aid. It requires blood Sacrifice, Spellburn, or a sympathetic energy source to be cast successfully. Each of these methods have their bonuses and drawbacks.

The Summoning Ritual takes 30 minutes to execute, in order to prepare spells for casting that day. This ritual is not memorized, per se, rather it is a result of mental training and meditation. The Magic-User literally connects their Life Force to that of the Esitouche in order to reach into the Outerdark for magical power.

The Magic-User does not need to roll a Save vs Spells to avoid Corruption, nor is there a chance for Spell Failure, unless the Magic-User is physically interrupted during this meditation period. This is a Spell-like power (as is Detect Magic).

The Magic-User may then prepare their spells, needing additional time for each group of spells: 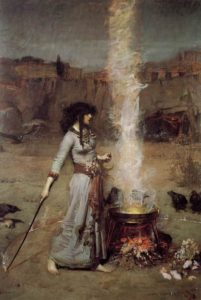 If a M-U decides not to, or prefers not to, for whatever reason, Summon a supernatural entity to power their spells for that day, they will need to create a power source and create a Sympathetic link. Typically this source is a fire of some sort, usually in a brazier or large fireplace. For the purposes of this rule assume two pounds of coal or five pounds of wood burns hot enough for spellcasting for one hour. During that hour a M-U may cast up to four levels worth of spells.

Furthermore, for the purposes of this rule, for each two-pound measure of coal (or five pounds of wood) added to the brazier it will burn and provide energy for another hour, up to a total of five hours.

For example, if an M-U were to load a brazier with six pounds of coal (or 15 pounds of wood), it could power up to four L III spells or three L IV spells over the course of three hours.

(Yes, this may seem like a lot of paperwork and tracking, but rest assured it will come up. Better safe than sorry!)

For spells powered by a sympathetic link to a fire, there is no need for a Save vs Spells for Corruption. Spell Failure rolls are unaffected.

“Blood aids great sorcery,” quoth the mummy, and he was right. A magic-user can harness more magical energies if he is willing to make mortal sacrifice: offer part of his soul to a demon, foster a demi-god’s greedy growth by sacrificing the physical life energy in his own cells. Before rolling any spell failure, a Magic-User may declare that he will attempt spellburn. In attempting spellburn, the Magic-User temporarily expends points of his Strength, Dexterity, or Constitution score to either power a spell or enhance his spell failure roll. For every ability point he expends, the Magic-User can power one level of spell or add +1 to his spell failure roll. For example, a Magic-User in a life-or-death situation may need absolute certainty that his next spell functions. He calls to a supernatural entity in the Outerdark for assistance.  In offering the entity a share of his life-force, he trades 7 points of Strength to give himself a +7 bonus to his next spell failure roll. Ability scores lost in this way return as the wizard heals. Each day he does not attempt spellburn, he recovers 1 point of ability score. 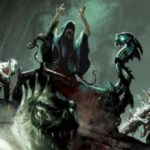 There are ten Schools of Magic, each with their own specialized type of magic:

The spell-like power of Detect Magic available to Magic-Users is able to identify the school of magic, its approximate range, and the relative strength of the caster.

Note: There are no healing spells available, except for the Exalted ability to Lay on Hands and the alchemical preparations of the Sisterhood of the Raven. The reverse of the various Cure Wounds spells are available, as spells of the Curses School.

Spells known and the number a PC is able to memorize/prepare are as found in the charts for the specific character class. Learning a new spell that a PC discovers is dependent on the % to Know Spell of the PC’s INT score.