The class of Witches are an off-shoot of the Nurdiyan praxis. Cut off from other Nurdiyans, Human or Centaur, those who became Witches found themselves forgetting their spells and magical abilities. In the time of chaos after the Cataclysm, these Nurdiyans had enough magic left that they were able to contact and bind or bond with supernatural entities roaming Weirth. As magic continued to fade, binding became less functional as a method of transmitting magical power, and the concept of Pacts emerged. Most of these entities were unable to fully interact with the physical world, and the former Nurdiyans offered a way for them to do so. Calling themselves Witches, these magic-users developed a new set of magical spells and abilities to deal with the horrors of the post-Cataclysm world. The entities they engaged taught them many new things as well, and their magical repertoire grew.

This new branch of magic, based in fragments of lore found here and there, became a more encompassing collection of works. As the disorder in the world decreased, the Witches created the disciplines of Blood Witchery (cauldron magic with large fires, sympathy, blood, Mother’s Milk and personal energy to power ritual magic) and the schools of  Elementalism.

As Humanity spread once more, witches were introduced to the lore of the low-level cultists, spreading the word of the new gods. Added what the Witches already knew of magical lore and what they learned from their patrons, the Witches set about to re-create magical academies and traditions. These academies were designed to be a place for Humans to get control of those able to wield magic, and have them do so safely. The now-traditional Schools of Magic grew from this need for standardization and safety. The academies gravitated toward cities and other population centers for protection, for patronage and access to the handcrafts and materials available due to large-scale trade. 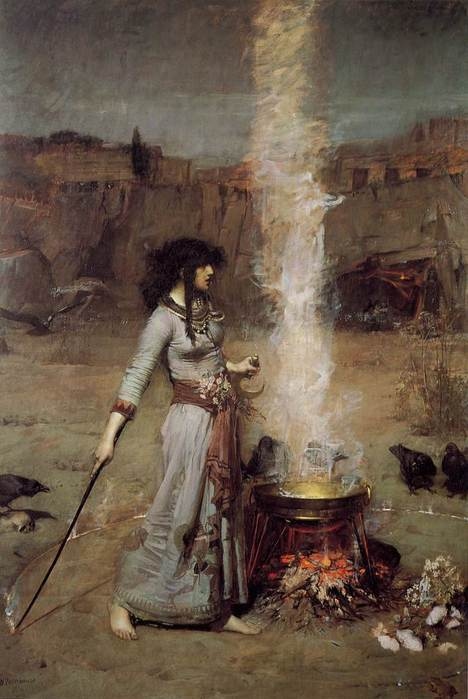 The older types of Witches, having a magical tradition that was outside the norm of civilized society (like Blood Witchery), kept to the countryside, or even further afield. These Witches tend toward Chaos in their alignment. Their spellcasting is very heavy in material components and in highly ritualized casting practices. Witches are also somewhat less dependent on supernatural entities for powering some of their magic. They have developed techniques involving concentrating power by extracting it from material components in liquid form (Blood Magic/Cauldron Magic).

The Witch depends on both Wisdom and Intelligence for effectiveness, and thus must have a minimum score of 12 in each Ability. If WIS or INT are greater than 15, the character adds 10% to experience awarded.

The Witch utilizes a d4 for determining HP.

They use the Magic-User Melee, Spellcasting and Saving Throw tables.

The spells available to a Witch are determined by their Patron and/or School of Magic.

Witches may use any weapon type which can be used by Magic-Users, and have the same restrictions as Magic-Users on the wearing of armor.

Magic Sense: A Magic-User can sense magical powers being used in their vicinity. This ability increases with level, and the range is dependent on the level of spell or ritual being cast/performed.

At 3rd level a Witch gains the following abilities:

At 4th level – Acquire Familiar: Similar to a Find Familiar spell, except that there is no chance of not acquiring a familiar. The familiar adds its hit points to the Witch’s, but if the familiar dies, the Witch only loses the hit points the familiar originally added, not an additional double the number of hit points added. A Witch can only obtain one familiar in a 10-year period, so if her familiar dies she must wait until the end of the period for another.

Summon Patron – gaining 5th level the Magic-User will need to perform the Summoning Ritual, in order to gain access to spells of third level or higher. A Witch can cast magic spells chosen from a list particular to the supernatural entity summoned.

Level 3: Brew poisons and narcotics: A Witch can brew one dose of either a poison or a narcotic each day, providing she possesses the necessary ingredients. The mixtures cannot be used to coat weapons, but must be ingested by the intended victims. A Witch learns how to brew Type A ingestive poison at level 3. She learns how to brew an additional type of ingestive poison for every two levels she progresses beyond third level. Thus, at 11th level a Witch can brew Type E poison. Poison types are as per the Dungeon Masters Guide. Saving throws are applicable. A narcotic has the effect of a Sleep spell on a victim with 8 or fewer hit points, if the saving throw is failed. A victim with from 9-16 hit points will be reduced to half Dexterity and half normal movement for 12 turns; a victim with 17-24 hit points will lose one-third Dexterity and one-third movement rate for the same 12-turn duration; a victim with 25 or more hit points will lose one-sixth of Dexterity and movement for the duration of the narcotic’s effect. A successful save will halve the effect and duration of a narcotic.

Level 4: Brew truth drug: A Witch may brew one dose of truth drug per week. A victim who ingests a dose of the drug will fall into a stupor, and is forced to answer from 1-4 questions truthfully. The truth drug can only affect an individual of the same or a lower experience level than the Witch who brewed the potion.

Level 5: Candle magic: A Witch may manufacture one candle per month. For each three days spent in making the candle, it will burn for one turn, up to a maximum of 10 turns (for a candle which took 30 days to make). The magic of a candle takes effect when the candle is snuffed out, or burns down to nothing at the end of its duration. A candle must be burned in the presence of the intended victim in order to work.

Level 6: Brew love potion: A Witch can brew one love potion per week. The potion will have the effect of charming an individual who drinks it and does not save successfully vs. spells. The potion has a chance of affecting a victim of the same number of levels as the Witch who brewed the potion. Thus, a 9th-level Witch could brew a potion to affect a 9th-level Fighter or lower, but not a 10th-level Fighter. Each potion has a maximum duration of one week, with a 15% chance each day (cumulative) that the potion will wear off at the end of the first through sixth days. Victims who make a successful save vs. spells are not affected.

Level 13: Brew flying ointment: The Witch may brew enough ointment per week for one human-sized individual to fly (as per the Fly spell). The flying duration is 1-4 turns plus a number of turns equal to the Witch’s level. The ointment must be smeared over the recipient’s naked body to work.

Level 15: Manufacture control doll: Once per week, a Witch can make one clay or wax doll which she can use to control one character or monster. Dolls are made to fit general categories, e.g. a man, woman, a troll, a dragon. To work, a part of the specific target (nail clippings, lock of hair, bit of outer skin or scales, etc.) must be made part of the doll. Once the specific material is added, the doll acquires a focus. The doll now must be shown to the intended victim. If the victim fails to save vs. spells, the victim is charmed (as per a Charm spell). The charm lasts as long as the doll is intact and in the Witch’s possession. If the Witch loses the doll or the doll is destroyed or damaged, the charm is broken.

Level 17: Fascinate: The power of fascination may be used once per day. A Witch merely has to concentrate to exercise the power. Any individual who looks at the Witch and fails to save vs. spells will faithfully serve the Witch as long as the fascination lasts. It lasts for a number of rounds equal to the level of the Witch. Service while fascinated will be nearly absolute, stopping just short of following suicidal orders.

When a Witch reaches 8th level she automatically attracts 2d6 x10 followers if she establishes a place of worship. Since Witches worship forbidden gods, such a place of worship must be in a wilderness area and kept secret besides being cleared of wandering monsters. The followers will remain secret to the outside world except under extreme circumstances. A Witch may also obtain the services of hirelings in the normal manner.

A Witch will not establish a Stronghold.