“Druids” or Nurdiyan (pronounced: new-whirr-die-enn) are the successors of a professional agricultural class of Human and Centaur servants of the Elves. The Nurdiyans worked with the Elves in mighty gardens, groves and farms. Transmitted MU-to-MU after the Cataclysm, the magical arts of caring for plants and nature are among the oldest magic remaining on Weirth. The methods and techniques of this sub-class are very Shaman-like, with a great deal of emphasis on ancestor-guidance and Mother-Weirth spirit patronage.

After the Cataclysm and the departure of the Elves, Nurdiyan began to teach and ordain followers to spread the word. Their goal was to foster the hope that if more people remembered the old ways, then civilization would not fade away. Low level spells don’t need any input or guidance from gods (or spirits, demons, elemental forces, ancestors, etc). People could just keep passing them on, orally or, eventually, in a written form. These became the Zealots, Prophets, fakirs and priests and so on. Of course, some were simply charlatans with a magical robe.

The Nurdiyan is a sub-class of Magic-User. They are generally Neutral in alignment, though they will tend toward Order in the macro-sense of civilization. In their dealings with natural forces they must have a minimum WIS of 12 and CHA of 15. If both ability scores exceed 15 they will earn a 10% bonus to earned experience.

The Nurdiyan utilizes a d4 for determining HP.

Nurdiyans may use any of the magical items available for all classes. They use the Magic-User Melee, Spellcasting and Saving Throw tables.

Metal in general, and iron in particular, is inimical to the entities the Nurdiyan class depends upon for magical power. They must eschew any metal armor and/or shield. Items of leather, bone, wood and the like are acceptable. 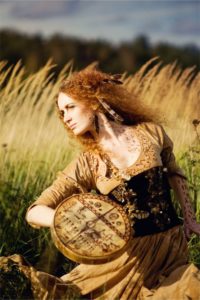 Nurdiyans have a structural obligation to protect natural spaces, creatures, crops and livestock. Conscientious harvesting, of course, is the goal of farming and animal husbandry.

Nurdiyan have their own secret language, and all speak/write it in addition to their other tongues.

A Nurdiyan can cast magic spells up to level five (L V, experience level nine, depending on their innate level of magickal ability: Gift or Talent), chosen from a list particular to their teacher/training. Nurdiyan without a teacher or mentor will only be able to acquire new spells through discovery, or by trading for/stealing spells from other Magic-Users.

Magic Sense: A Magic-User can sense magical powers being used in their vicinity. This ability increases with level, and the range is dependent on the level of spell or ritual being cast/performed.

At 3rd level a Nurdiyan gains the following abilities:

Upon gaining 5th level the Nurdiyan will need to perform the Summoning Ritual, in order to gain access to spells of third level or higher. A Nurdiyan can cast magic spells chosen from a list particular to their god.

At 7th level, the Nurdiyan gains immunity from Charm spells cast by the Fey creatures of the woodland. This would include: Dryads, Fauns/Satyr, and Pixies. The aquatic Fey creatures are not included in this immunity.

When a Nurdiyan achieves 8th level he or she automatically attracts followers if they establish a place of worship – a natural gathering place of at least 1,000 square feet in area with an altar, shrine, chapel, etc. These followers are fanatically loyal and serve as caretakers of the gathering place without pay so long as the Nurdiyan does not change deity/denomination or alignment. These followers, called Nurtharuri (new-whirr-tah-roo-ree) number 4d4 x5.  In addition, 3d6 wild beasts will magically appear to the Nurdiyan, and take up residence in the gathering place. These creatures are not ‘tame’, rather favorably inclined to the Nurdiyan and their followers. These beasts will be able to understand and follow basic verbal commands. Your DM will have additional information as to the types and quantities of these beasts.