A specialized study of magic and sleight-of-hand is displayed on the vocation of Illusionist. Gifted or Talented with magical ability, the Illusionist is generally self-taught in the lower levels. If they have the aptitude and fortitude, some will seek out a higher level magic user or Illusionist to take on as a teacher. At higher levels Illusionists do call on supernatural entities to power the spells and illusory effects of their trade.

Illusionists do not generally wear armor, nor have weapon proficiencies. An Illusionist may become proficient in a weapon as a 7UP Feat. They have a minimum INT and DEX score of 12. Illusionist characters with an INT of 15 or greater receive a 10% bonus to earned experience.

The Illusionist uses a d4 to determine hit points.

Illusionists may use any of the magical items available for Magic-Users. They use the Magic-User Spellcasting and Saving Throw tables. They use the 0-level Melee table until becoming proficient with a weapon. 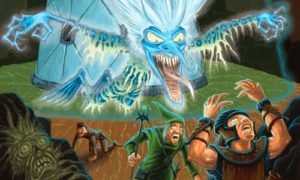 An Illusionist can cast magic spells up to level five (L V, experience level nine, depending on their innate level of magickal ability: Gift or Talent), chosen from a list particular to their teacher/training. Illusionists without a teacher or mentor will only be able to acquire new spells through discovery, or by trading for/stealing spells from other Magic-Users.

Low-level spells and rituals have spread throughout the peoples of the world in a definite cargo-cult style. Ritual phrases, symbols, bodily motions and dances intended to manipulate nature are the kinds of magic that most people encounter or utilize in their daily lives. These practices are a mixture of superstition, chicanery and poorly understood ritualism, designed to harness the power of magic for manipulating reality for the benefit of the Illusionist and those around her.

Many of the practices exhibited by everyday people are based on remnants of actual magical procedures left over from the previous age, yet they rely on a type of “placebo effect” for their efficacy. These practices have been handed down from parents to children, from prophets and zealots to their congregations, over generations:

These practices, in one way or another, apply to Magic-Users of any class.

Illusionists are learned in many techniques of sleight-of-hand and misdirection. They are able to perform many “magic tricks” that are merely pyrotechnic effects or chicanery. The list of actual spells available to Illusionists is quite short, but they are trained (and can engineer for themselves as a 7UP Feat) to replicate many magic spells as “fancy tricks” or illusions.

The PC will work with the referee on how to prepare and perform these illusions.

Magic Sense: Upon reaching third level, an Illusionist can sense magical powers being used in their vicinity. This ability increases with level, and the range is dependent on the level of spell or ritual being cast/performed.

Summon Patron – gaining 5th level the Magic-User will need to perform the Summoning Ritual, in order to gain access to spells of third level (L III) or higher. An Illusionist can cast magic spells chosen from a list particular to the supernatural entity summoned.