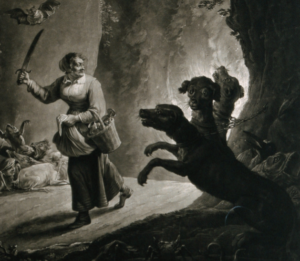 “…this adventure can be used as a hook for other adventures. Therefore, it can be a hex on a map, a point in the middle of a hexcrawl, it can be used as a prelude to another adventure, a simple diversion for players outside of their larger campaign, an unusual occurrence after a TPK instead of the deaths players were expecting, or even as a way for Judges to revise, reboot, or otherwise alter their campaign’s world events in surprising ways…”

This little booklet is a brilliant bit of creativity. Lucas Rolim (@rolimllucas on Twitter) has put together a simple yet effective adventure hook. Just as it describes above, it provides a set of tools for creating a very unusual encounter with an extraordinary result. The puzzles are original and clever, the encounters are creative and accessible. This supplement is written with Rolim’s Pacts & Blades rules-lite RPG in mind, but it can very easily be adapted to any other #OSR system. (And, yes, I am thinking that now I need to get that PDF too, and check it out. Especially as the subtitle is “Moorcockian Fantasy“!!)

One can easily take this supplement and run with it, adding it to any campaign. In fact, I think it might be fun to use as the first adventure for some 1st level characters that have just survived a DCC-like funnel.

I also really like the concept of having this adventure take place after a TPK, where the PCs would get one last chance to make a difference. In an #OSR game, I think it might be interesting to use it as a replacement for the monstrous Psionic encounter table.

In any case, I think it’s great. Buy it and have a blast figuring out how to insert it into your campaign.