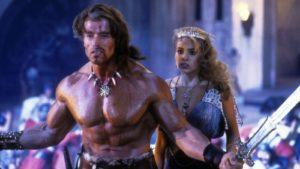 Back in my middle- and high-school days I read everything Conan I could get my hands on.

Novels, comics, whatever. The large-format Savage Sword of Conan were my favorite, with longer stories, usually complete in one issue, and the art! Awesome.

Hack-n-slash, demons, wizards (scantily-clad babes didn’t hurt, either), SSoC had everything you could ask for in the Sword & Sorcery genre. Even the movies in the 80s were great, with action, monsters and exotic-looking locales.

All of these had a major effect on my D&D campaigns and gaming. There was almost always a Thulsa Doom character, lurking behind the scenes, pulling strings and making people do unpleasant things. Of course it was up to our heroes to wade in, swords swinging and spells singing. IIRC we had a pretty epic battle with the party fighting their way through the temple to confront Doom on the balcony, looking out over the forbidding wastelands. I suspect this was also the first time a magic-user took the chance of setting off a Fireball spell partially indoors! (BITD Fireball spells affected a volume of space, defined by a sphere of 33,000 cubic feet, which fills up dungeon rooms and corridors in a spectacular fashion!!)

I’ve been re-reading the Conan stories (in chronological order of they were written, as it happens) again while the plague keeps us at home. I have to say that I honestly don’t remember them being so dark and atmospheric and Eldritch. Perhaps I stuck to the longer novels and novellas by the supporting team of authors that joined the Conan universe, but maybe I’m just older and more discerning now. In any case, it is amazing how much richer and more atmospheric the stories are than I remember.

In  our very first glimpse of Conan, already a King!, we see conjured spirits, vile sorcery, treachery, a great wizard reaching out across time and space, and a mighty battle for survival. Whew! Today, this tale would get puffed and inflated into a 1,800-page trilogy with paragraph after paragraph describing the enameled pin Conan wore to clasp his cloak.

This is a pretty good place to look for where I started to play D&D. We had the castles of Ivanhoe for our characters to live and relax between adventures, but just over the hill were the deserts of Samarkand and the jungles of Kush. Ape-faced demons lived in caves in the mountains and the pirate Queen Belit harried the coastal towns. 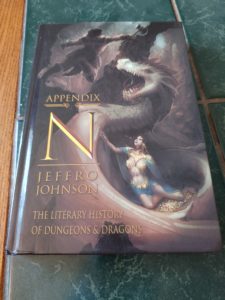 In Appendix N Jeffro Johnson writes about how Conan is a barbarian, and how it is Conan’s integrity, rather than his savagery, that distinguishes him from the “civilized” man. For me, I love the stories less for the character of Conan, and more for the setting of the Hyborian World itself.

Ancient, cyclopean stoneworks, once a mighty wall about a castle built of eldritch, green-tinted marble-like stone now tumbled to ruin. The words are so evocative and romantic, they transport me to that place. I can see the stones overgrown with vines, smell the air, and hear the wind whistling through the shattered ruins of the ancient temple.

“Only the age-old silence brooded over the mysterious ruins of Kuthchemes, but Fear was there; Fear quivered in the mind of Shevatas, the thief, driving his breath quick and sharp against his clenched teeth.

He stood, one atom of life amidst the colossal monuments of desolation and decay. Not even a vulture hung like a black dot in the vast blue vault of the sky that the sun glazed with its heat. On every hand rose the grim relics of another, forgotten age…shattered images whose horrific features the corroding winds and dust storms had half-erased.”

Who doesn’t want to go there and discover what lies beneath the sands? This is where my D&D came from, and where it continues to be found.