The World of Weirth has no “traditional” goblinoid creatures. No Goblins, Hobgoblins or Bugbears. Rather, what the people of Weirth think of as Goblins are small, clever anthropoids who like to take things apart and put them back together. 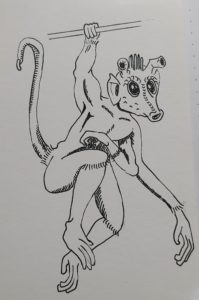 A “Goblin” is a small creature that looks like a Spider-monkey with three arms. They are covered in soft, short, black hair except for their faces, hands, legs (from the knees down) and prehensile tails (where the bare skin is dark gray).

Their snouts are a bit like a tapir, with a stubby “trunk”, large ears and trumpet-like sense organs above their large, black eyes. These sense organs are for communication, Goblins can sense and generate sounds far above and below normal human hearing.

The right arm is large and muscular, with an incredible grip (STR 15) and a curious wrist-lock that can stiffen the hand into a “hook”. The fingernails on the right hand are very thick and tough, almost like claws. On the left they have two arms, the upper, outer arm is longer than the right arm and has very long, slender, dextrous fingers. The inner, smaller arm has shorter fingers with “suction cup” ends, rather than nails.

Goblins have a tribal society, with elaborate social customs determining a leader, or “Goblin King”. This is not always the strongest, and Queens are as common as male leaders. They tend to inhabit underground places, or will construct above-ground “barrow” villages, often near the walls, outside a fortified Human settlement. They dislike full daylight, attacking at -1 when in sunlight. Goblins have normal infravision (60’ range).

Goblins are not exactly intelligent, they have limited language skills, but they are exceedingly clever with their hands. They can take apart and re-assemble anything, usually better than they found it. They are inborn weavers and sculptors, they are also talented wood-carvers and -craftsmen.

They will flee rather than fight, unless they heavily outnumber a foe. They will usually have javelin-like weapons, or short bows, or small knives nearby to use as weapons (rather than hunting implements). Females with kits will attempt to flee from violence with their offspring, yet if cornered, or if a kit is injured/killed, they will fly into a murderous, berserk rage. Goblins prefer to attack from range, but if trapped will attempt to swarm and overbear a foe. If a group of six or more goblins are able to clamber onto an opponent, they will begin to disassemble any armor or protective gear, having it off in 10d6 seconds. They will fight to overbear and subdue as a (number of Goblins)+2 HD creature. A victim of this subduing damage will find themselves flat on the ground, stripped nearly naked, and bound like a lamb for slaughter. Goblins have an innate spell-like power of Mending/Unraveling, it is not a spell so there is no save.

Despite their small size, a Goblin’s right arm is very strong, like a very strong Human, with a crushing grip and a specialized wrist joint that can twist to “lock” the fingers into a hook. When they do this they are able to hang by their right arm for an essentially unlimited amount of time.

Their left arms and hands are much more delicate and dextrous, able to manipulate very small, delicate items, pick locks by touch, and create amazingly detailed carvings or sculptures. With their Mending/Unraveling power they are able to fix pretty much any broken, non-magical item except glass or silver. This takes d10+10 minutes for basic items, up to 90 minutes for difficult/complex/very broken items.

Goblins often dwell on the outskirts of a human settlement, in order to collect broken items and refuse, which they will then fix, or make something new with, and secretly give to “deserving” humans later. (i.e., leaving an item on a doorstep at night)

Some Goblin tribes, possibly more advanced (or just corrupt) take coins in exchange for items they have repaired or constructed.

(Goblins are bio-engineered “technicians” of an advanced, extra-terrestrial civilization. They were crew on a spacecraft that crash-landed on Weirth centuries ago, and have spread out over most of the world.)