The theme for Carnage on the Mountain in November this year is “Spies” or “Secret Agents”, so I am creating a custom scenario for Pulp Alley.

The game will feature my favorite Pirate minis in a Social Affair-style event, where Brawling and Shooting are Replaced by Dancing and Repartee.

This is the first draft, and there has been no play-testing yet, so things may change. Also, when it is complete I will make all of these materials available as a PDF for you to download. This will include play sheets for each of the pre-generated characters, the Activation Deck*, and the floorplan of the manor house.

Changes to the rules for the scenario:

Health changes to Social Status, reflecting the Character’s ability to withstand insults, embarrassment, etc. All Characters are ‘Leaders’, so Social Status starts at d12. When it drops to 0 you have one shot on a d4 for a Parting Shot, the perfect comeback or the Character must leave the game in complete humiliation.

Shooting changes to Repartee, being able to converse with other characters and Plot Points. Characters can use Repartee as a ranged or base-to-base “attack” to cause ‘Hits’ to their opponents Social Status.

Brawl changes to Dancing. When a Character is in the Ballroom, they may move 6″ to engage another model in a dance (or be engaged by another model!). A Successful Dance will raise their Social Status by one die type, to the maximum of d12. A failure does not mean Social Status goes down, so both models may get an increase.

Dodge is not used in this scenario.

Major Plot Point: Edmund Boxelder, caretaker of the late General’s mansion on San Pommes de Terres. Known to the members of the underworld (some of the Characters) as a smuggler and spy, he is rumored to have intercepted the General’s most recent report on the activities of known Pirates and Spies (the Characters!). The Characters want to gain this most valuable information!

Pay Your Respects – each Character must visit the casket of the late General and “say something nice” to the other visitors gathered. Overcome Finesse vs 3d10 or take 3 Hits to Social Status (works just like Hits to Health, with corresponding Social Status Checks)

Each Character must Pay Your Respects and engage another Minor Plot Point before they can approach and engage good Mr. Boxelder.

To help players get into the spirit of the game (it’s got a role-playing element to it…) each will start with 6 Coins and 6 Gems.

Gems can be used to change die roll results, 1 gem per pip, for Characters or their Friends (who is Friends with whom will be listed on the Character play sheet). For example, Calico Jack starts with 6 gems, he encounters a peril and needs 2 Successes, but rolls a 3 and a 4. He can spend one Gem to increase the 3 to a 4. Or, if Jack needs to “Match” two 5s, he can spend three Gems to change the 3 to a 5 and the 4 to a 5.
Likewise, Calico Jack is Friends with Ann Bonney, so he can spend his Gems to alter her die rolls as well, during her Activation.
Gems can never be used to reduce a die result.

A Character may also spend three Gems to Activate out-of-turn, vis a vis the Play Deck, at any time before a card is turned. This may only be done once per turn.

Coins are the Victory Points of the game. A Character gets one coin for overcoming any Peril, 2 for accomplishing a Minor Plot Point, and 4 for the Major Plot Point.

Some Characters have intense dislike for another Character. So negative are their feelings toward one another that any base-contact with that Character means the two cause a scene and both Characters take a Hit to their Social Standing, with no Social Standing Check after. The two Characters then each move d3 inches directly away from each other.

The Major PP and the Casket will have fixed start points, as will the assorted Perils. See Map.

The NPC Plot Points/Perils will have random start points. Players should roll a d10 for initiative, then each will select one NPC, roll a d6, and place it on one of the random locations. See Map.

After all of the NPC models have been placed the players place their Characters – in the same Initiative order – on the board. No Character can be placed within 6” of the Casket, Edmund Boxelder, or an NPC.

Each model will have an Activation Card in the Play Deck, PC and NPC, plus Edmund Boxelder and some of the other Peril models. This deck is shuffled at the beginning of each turn, and as each card is turned up that Character may Activate. A Character may spend three Gems to Activate out-of-turn, at any time before a card is turned.

Here is a sketch of the manor house floorplan: 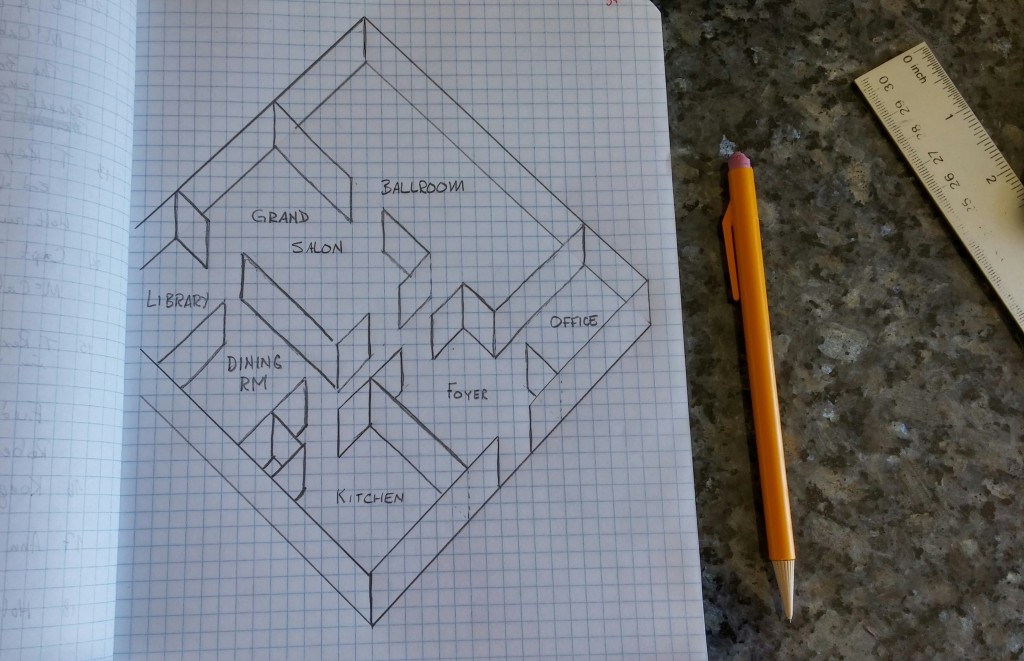 I am going to use 12″ square floor tiles for the floor, and either foamcore or more tiles cut down, for the walls. I have downloaded some wallpaper PDFs and some tile/parquet flooring images that will make up the decorations. Of course the entire WIP will be posted here as well.

For Convention games we have been using a deck of cards to indicate which side activates next, as passing the Initiative can be cumbersome, confusing, and get in the way of actual gameplay.

The past few games have consisted of 3 Leagues of 4-5 models per side, so we use a deck of playing cards to indicate who goes next: red for one side, black for the other. We also mark some of the cards, or assign a particular card for a particular model. In the last Kong!! game the dinos moved when ever a marked Queen was turned up, and Kong himself was the Ace of Spades. Count out enough cards for each side’s number of models, plus any additional Perils or models and give them a shuffle before each turn.

For this game I will be creating a card for each model in play, both for the Players and for the NPCs and other Perils.

I look forward to your thoughts and Comments!