One of the reasons I like the Pulp Alley game so much is that it is specifically designed to tell a story with the scenario. Even if the basic goal is “Get Loot”, the rulebook provides these great charts for identifying what the Loot is – the Plot points.

Is the prize information, like a Bloodstained Photograph? Or a Coded Journal? Is it an encounter with an Injured Hostage or Foreign Scientist? Perhaps one of the Plot Points is actual Loot – a Crystal Orb or Jade Idol. How do these Plot points tie together? What do they have to do with the ongoing storyline?

The Plot Point system makes ‘getting ready to game‘ almost as much fun for me as the game itself. Most times I get so wrapped up in the story I don’t even care if I win or lose. 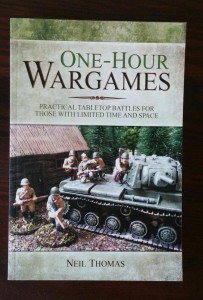 So I am always on the lookout for game aids or resources that can expand this story-making into my other games, like 40k or FWC. In a recent AAR at The Governor General of Sector Six, “Maj. Guiscard” mentions the source of the scenario in question is a book called One Hour Wargames…

The first part of the book covers Thomas’ rules for various time periods: Ancient, Medieval, Pike & Shot, etc. I didn’t spend any time really looking into that, I have my own preferred rulesets already. The reason for the purchase was the Scenario section.

For this first battle, we used Scenario 5, “Bridgehead”, and the book’s random force generator. For rules we used our own homegrown card driven set.

“Bridgehead” is an extremely chaotic scenario: the units from both sides arrive piecemeal, plus the defender arrives from random board edges. The telescoping of the action to the ford led the whole thing down to a slugfest of who could roll better. If not particularly abundant with tactical choices, it was still fun to play. Speaking to my personal preferences, this scenario is a perfect illustration of the strength of playing detailed scenarios. I honestly would not have enjoyed the game if I was playing in a FOW or 40k tournament, but as a situation placed in front of me, and given orders to execute, it was a blast. (BTW – I was playing the bad guys)

The scenario is quite detailed, as are the other 29 in the book, which are all based on scenarios created by other writers. For example, number 27, “Disordered Defence”, is based on a magazine article about the Battle of Shiloh in 1862. The brilliant thing that Thomas has done is run these articles and scenarios, that were written for specific game systems or time periods, through a “filter” to make them generic. You can use these scenarios for any time period or game system.

I haven’t played any with my gaming group yet, but I think we can put some fun battles together.