In this exciting installment the Red Dragon Tong of Dr. Koo race against the von Snuff Vigilantes to find investigative reporter Betty Bixler. Miss Bixler disappeared after last episode’s raid on the Yangzee City Gazette, whether she has gone into hiding or been kidnapped is unknown. Dr. Koo’s Associate, Mr. Lee Hak, gave a Tip that the beautiful young reporter had last been seen near the Chapel of the Unblemished Spleen in the shore district of Yangzee City. 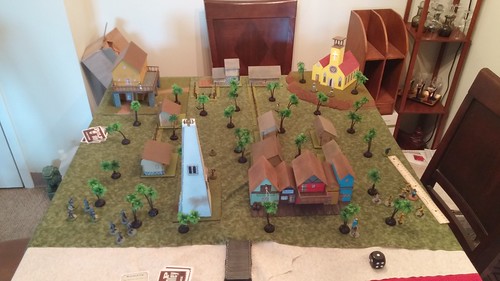 Before the scenario Number 10 Ox visited the Gymnasium the Red Dragons control and recruited a Backup, a shady character named Smee. Dr Koo visited the downtown Office to get the latest information about the Vigilantes (shift up one die type for Initiative), and Chang visited the Warehouse in the Port District to arrange a delivery (+1 Gear after the scenario).

They also received news there was an additional person of interest in the area (additional Bystander), a member of the mysterious Sisterhood of Kin-Yan. 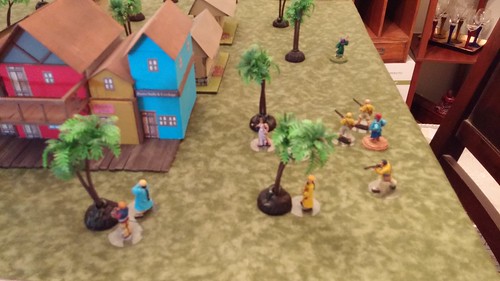 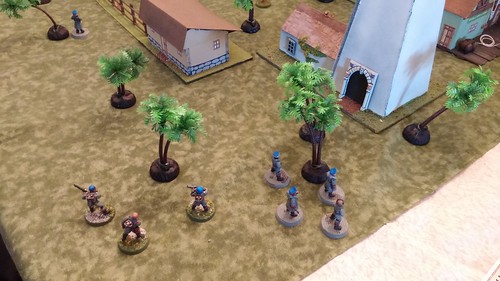 Get to the Action

Dim Sum, Smee and Chow Fat move north to engage the Bystanders in the neighborhood to find out if they know anything about the whereabouts of Miss Bixler. Chow Fat began a conversation with Margaret of the Sisterhood of Kin-Yan.

Meanwhile, Number 10 Ox goes for the contraband in front of the shops on the boardwalk, Lily, Chang and Dr. Koo get in a shootout with the Vigilantes, including von Snuff himself! 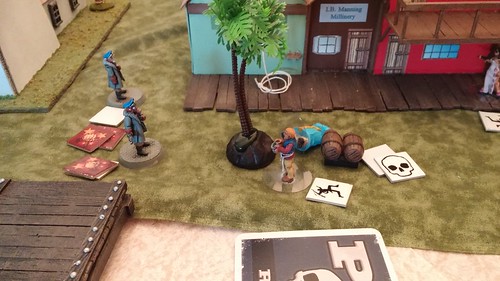 At the other end of the neighborhood two of the Vigilantes make their move to grab more contraband and engage one of the Bystanders. Stroop is able to shake down the witness for information. 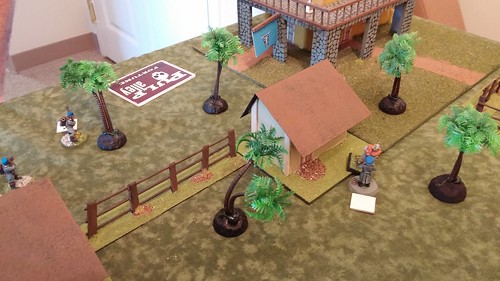 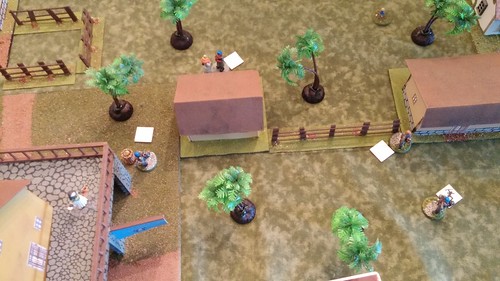 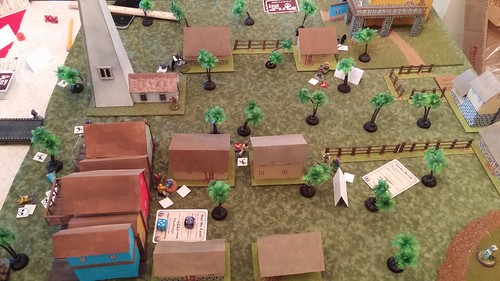 The shootout on the boardwalk continues as the combatants Dodge and duck into cover. 10 Ox, Brutus, Wong and Chang all go down in the fusillade. When the smoke clears only Chang is able to shake it off and recover, the rest are KO’d. Dim Sum and Chow Fat are KO’d as well, dealing with booby-traps. Smee is able to determine that Dan is just a bystander and knows nothing about Miss Bixler, while Margaret discovers a clue to Bixler’s location from her witness.

Emboldened by her success, Margaret rushes to engage the society matron to see what she knows. Vigilante Stroop hits her with a random Peril and she is KO’d!

The gunfire at the boardwalk becomes a running street battle as the Vigilantes move inland toward the Inn. Brutus and Smee get into a brawl, and Gunther levels his shotgun at Lily and Dr. Koo, hitting them with a burst. 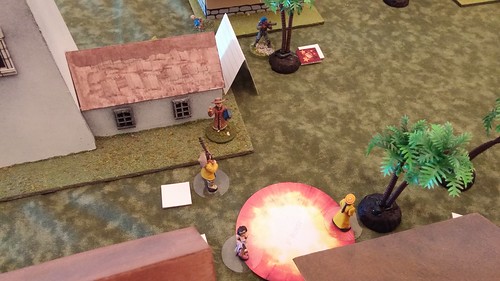 The ‘Dragons manage to avoid being wounded, while von Snuff is able to disarm the booby-trap on the last piece of contraband. This also contains the final clue to Miss Bixler’s location! The Vigilantes rush over to the socialite’s cottage with Dr. Koo, Lily and Chang hot on their heels. The Vigilantes “rescue” Miss Bixler and hunker down to defend their ill-gotten contraband. 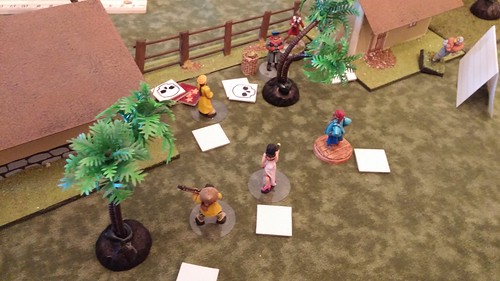 Through a variety of dirty tricks the Vigilantes are able to flee with their contraband and Miss Bixler, while two more ‘Dragons get KO’d. von Snuff is able to evade shooting from Chang, Lily and a rush by Dr. Koo!

All of the mayhem has attracted the authorities so the Leagues fade into the neighborhood, with Dr. Koo vowing vengeance on von Snuff and his cohort.

What is to become of Miss Bixler?
What is to be gained from the Contraband and Evidence?
How will the Red Dragons respond to this failure?

Find out in the next thrilling episode!