The Red Dragon Tong (a painting WIP as yet) staged a daring raid on the dastardly Vigilantes that have been printing lies about them in the Yangzee City Gazette. 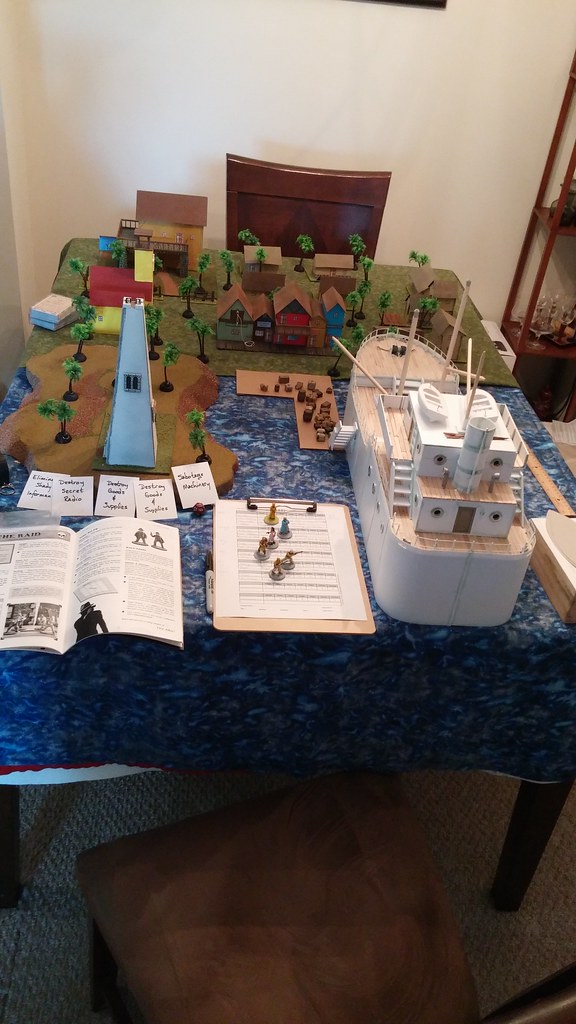 A close up of the town: 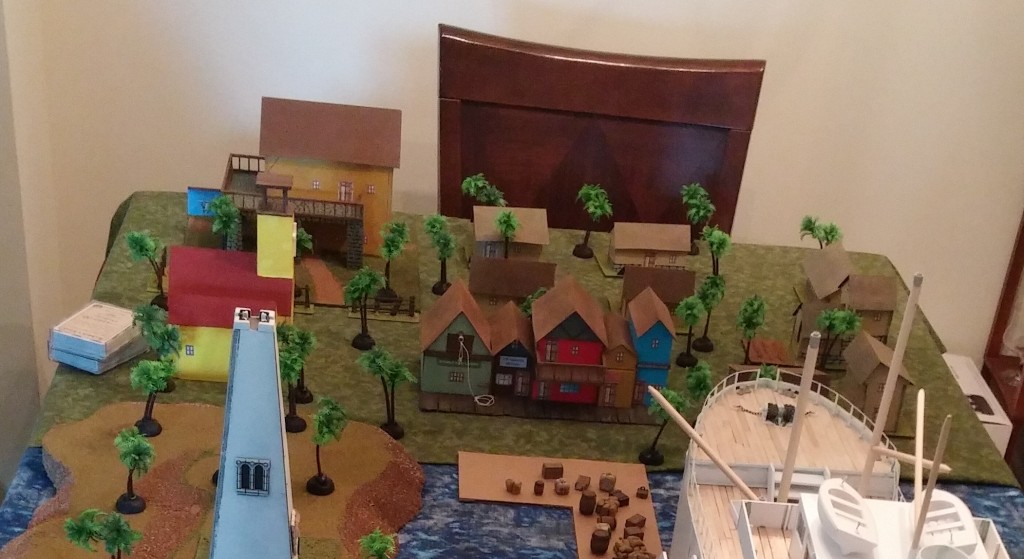 The sun was setting over the river as the Red Dragons made their move (visibility limited to 12 inches). First, Dr Koo and Dim Sum prepared to firebomb some goods & supplies, recently delivered outside the Blue Ox Inn. 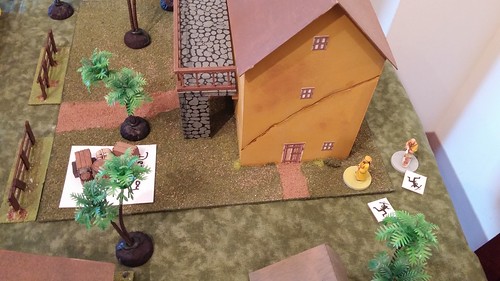 Koo moves toward the stack of goods, spots the Vigilante Pushtau, and fires a shot. Pushtau goes down! 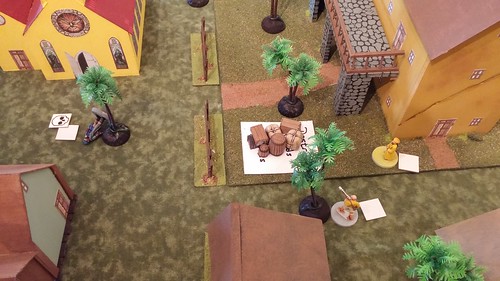 Next, Dim Sum moves up to the Plot Point and prepares to set off his firebomb. Unfortunately, it goes off prematurely and Dim Sum is Knocked Out. Frowning, Dr Koo takes measures into his own hands, overcomes the peril, and sets fire to the goods.

Meanwhile, other Dragons are working on Eliminating a Shady Informer, the one they believe is responsible for some of the stories in the Gazette and other troubles the Dragons have been having. The Vigilante known only as “Four-Eyes” blocks their way.

Remarkably, “Four-Eyes” survives a fusillade of fire from Lily, Chang and Chow Fat! 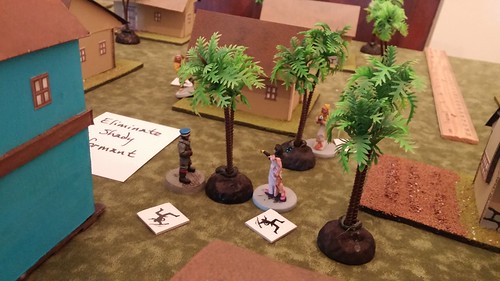 Finally, Lily is able to knock down “Four-Eyes”, allowing Chang to accost the Informer. He passes the challenge and eliminates her. 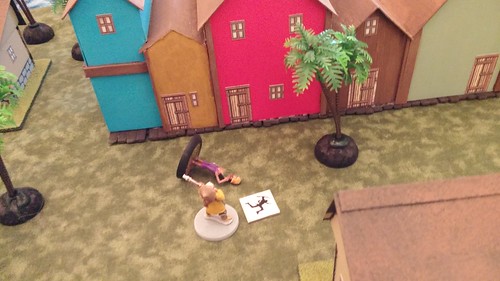 Next the Dragons make their way to the jetty, where a cargo ship is unloading still more goods destined for the putrid rag, the Yangzee City Gazette. Chang goes in with his firebomb, but gets Distracted. Twice! Having no dice to roll for the Challenge, he takes the hits and goes Down. 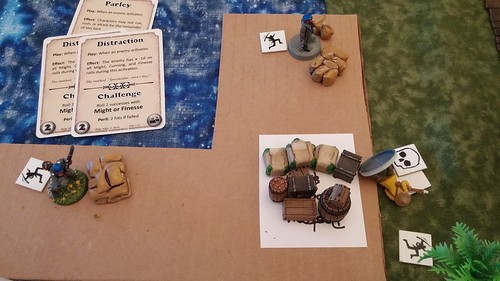 While all of this was going on, Number 10 Ox had made his way to the stern of the cargo ship in a rowboat. Dr Koo had sent a spy to the Gazette office and discovered there was a Secret Radio on the ship. 10 Ox climbed aboard the ship, battled the Vigilante Gunther for 3 turns (!) before he was able to Finish It!

10 Ox broke into the secret cabin and destroyed the radio. 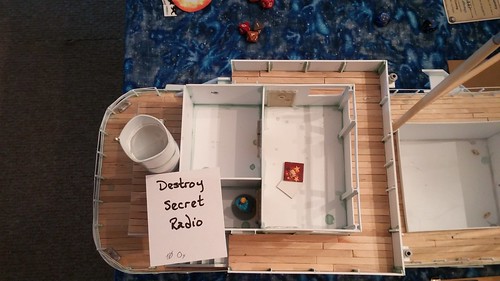 After accomplishing the first two Plot Points on land, Koo and the others rushed to the aid of Chang. Chow Fat and Lily were Knocked Out in a gun battle with more Vigilantes, but this provided the distraction Koo needed to help Chang blast the remaining store of Goods & Supplies! 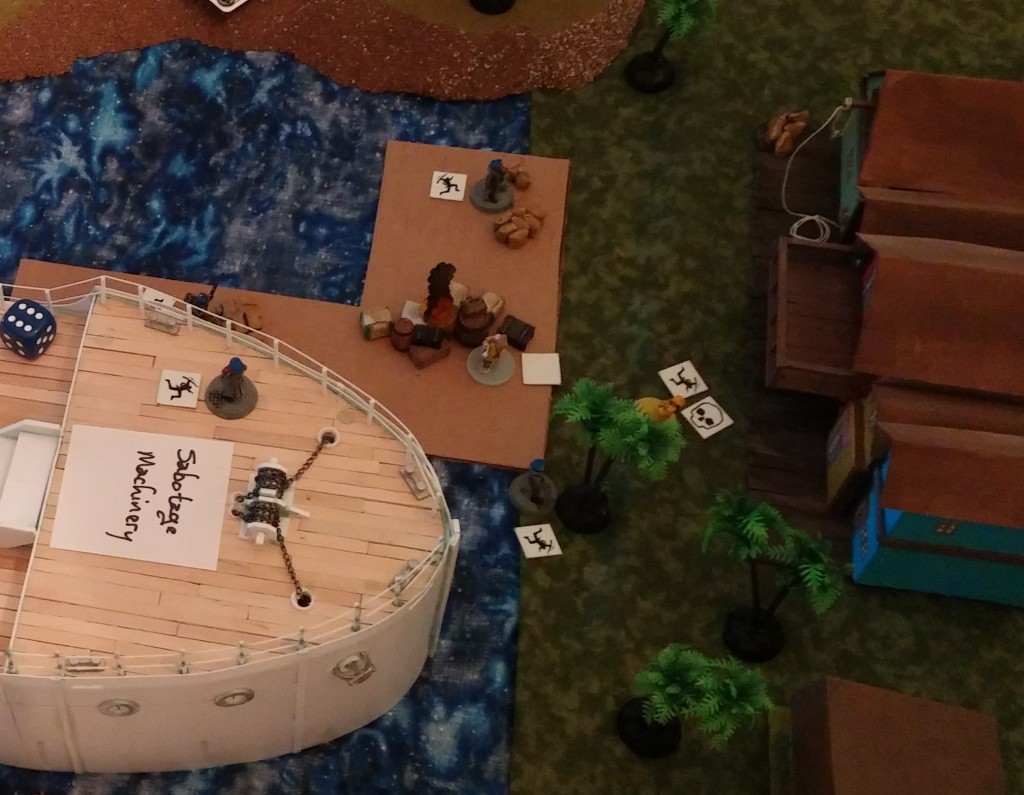 Due to the perfidy of the cargo ship’s captain, bringing these Goods & Supplies as well as the Secret Radio, Dr Koo wanted to sabotage the machinery on the deck. Sadly, with all of the commotion, fires set and gun battles, the locals had raised the alarm.

Postscript: Though the Red Dragons were not able to fully accomplish their goals, they did collect 4 Plot Points which enabled them to force the Vigilantes to relinquish control of the Yangzee City Gazzette.