The Fortress Monastery Gaming Lounge hosted a tournament on Saturday. My Imperial Guard Army did very well against two Space Marine armies. Both games will be logged on this page. All of the pictures are at flickr, here.

Game One, Stephen vs Jonathan

We rolled for Game Scenario and played Capture & Control in a Pitched Battle. My army was deployed to protect the “Power Station” and move into the ruins (not shown…see below) to take the Space Marine “Observation Post”. Click on the images to see larger versions.

My Command HQ consisted of the Senior Officer and his Mortar crew, Plasma Gunner, Primaris Psyker and Master of Ordnance: I also had a squad of 5 Stormtroopers in reserve under orders for Aerial Assault. We rolled for turns and I won, setting up first in a long front. Since we had already placed the Objective markers (Jonathan’s was just out of the frame to the left in the top image), I placed my Assault Platoon in a position to grab it after the Stormtroopers dropped in and made it safe. One of Jonathan’s models has the ability to “Steal the Initiative”, which I suspect that Jonathanwas counting on. Unfortunately for him I anticipated Jonathan would get to go first and set up my army in preparation for just that. He failed his roll, however, and the Imperial Guard did get to go first. Nice.

The Heavy Weapon squad, armed with lascannons, and the Support Platoon, armed with 3 Missile Launchers, opened up on the Land Raider while the Sentinel came out around the building and turned its multi-laser on the Dreadnought. In a spectacular display of firepower (and amazing dice-rolling) both the Land Raider and Dreadnought were destroyed!

After the fusillade of fire:

The Commander then directed his barrage weapons, in the form of the Mortar and the Master of Ordnance, to target the building he suspected was sheltering the Space Marine Observation Post. Four Space Marines were killed in this attack!

Meanwhile, the Heavy Bolter Squad advanced into the ruins nearest them and took up positions in the upper floors to provide more covering fire.

After such an onslaught of firepower the Space Marine Terminators that survived the destruction of their LandRaider were eager to take the battle to the Guardsmen. They began to make their way across the no-man’s land between the two forces. The Space Marines in the Observation Post were only able to fire one long-range weapon, but the plasma cannon over heated.

In turn two the Heavy Bolters were able to down one of the Terminators, but the rest of the shooting phase was ineffective.

On Jonathan’s turn he was able to move the remaining Terminators forward and the Plasma Cannon was much more effective, killing 4 of the IG Support Squad members. They made their Morale Check handily.

The Assault Platoon began to move out of cover and toward the enemy objective. The Primaris Psyker attempted to call forth the power of the Warp in a Lightning Arc, but was unsuccessful. While the lascannons blazed away at the Terminators and killed the Apothecary the Platoon Commander exhorted his troops to Move. Move. Move!

This phase saw the continued, inexorable advance of the Terminator Squad while the cursed Plasma Cannon-armed Space Marine in the Observation post continued to wreak havoc upon the Support Platoon, killing two more guardsmen. 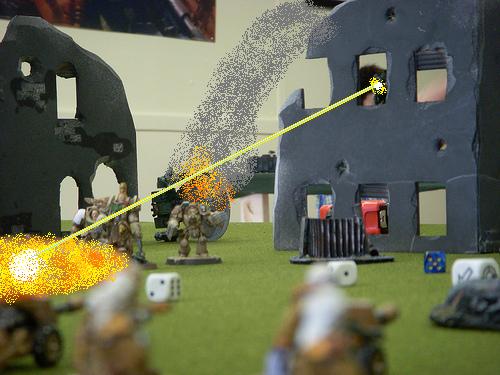 The Stormtroopers fell from the sky into the Space Marine zone without mishap and were able to open fire on the Marines in the Observation Post, inflicting one casualty as the Assault Platoon continued their advance and opened up on the remaining Terminators with Melta Guns, generating yet another casualty. The Terminators were able to survive the fire of the Lascannons and Missile Launchers, while the barrages were again ineffective at doing any real damage.

The Terminator Hero, sole survivor of the squad, was now close enough to assault the IG Assault Platoon, managing to kill three guardsmen before being cut down by the Sergeant’s power sword. The remaining Space Marines in the Observation Post opened fire on the Stormtroopers, with the Plasma Cannon taking out two of them. The Stormtoopers failed their morale check and fled toward the friendly troops nearby. 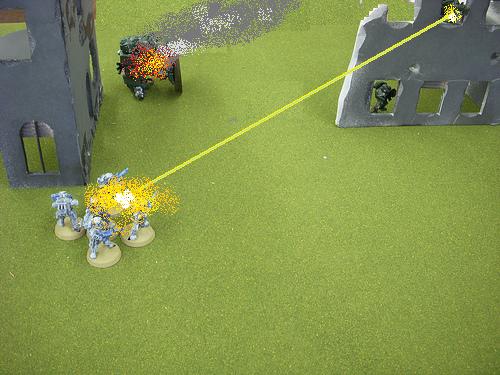 At the beginning of the turn the shattered Stormtroopers continue to flee while the Assault Platoon moved in on the Observation Post. In the shooting phase every available unit was called upon to fire at the remaining Space Marines guarding their objective. The Assault Platoon Commander was able to get his closest squad to Move. Move. Move! into the ruined building. 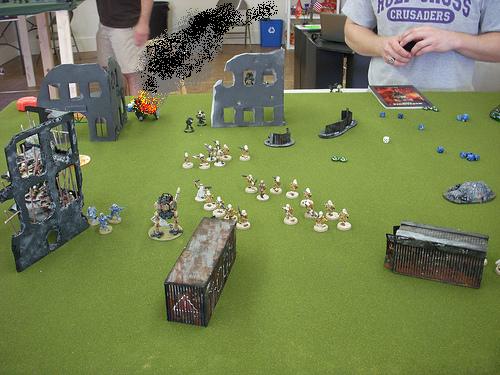 The lone remaining Space Marine in the ruins of the Observation Post took careful aim with his Plasma Cannon and was able to kill three of the Assault Platoon Guardsmen attacking his position. With their unflinching leader so near by they were able to make their morale check easily. 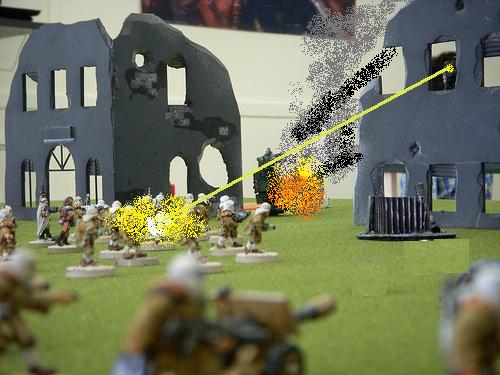 For what turned out to be the final turn of the game the Assault Platoon charged into the ruined building and killed the final Space Marine, taking the Objective and winning the game! A powerful victory for the Imperial Guard. Thanks, Jonathan, for such a hard-fought game.